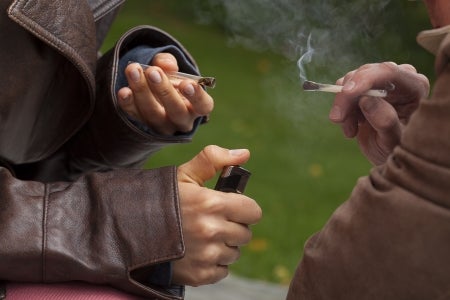 Number of young smokers on the rise—poll

Despite a decline in the number of Filipino adult smokers, younger smokers aged 13 to 15 went up in the past four years.

This was according to the 2015 Global Youth Tobacco Survey (GYTS) released on Friday by the Department of Health’s Epidemiology Bureau.

“Sixteen percent of the respondents currently use any tobacco product – smoked tobacco and smokeless tobacco,” the study said.

This figure is higher than the 13.7 percent tobacco use prevalence among the youth seen in the 2011 GYTS.

The GYTS is a school-based survey of students from private and public schools, aged 13 to 15 years old, on tobacco use.

The study also showed that 12 percent of the 8,789 participating students admitted to be current cigarette smokers.

This was a 3 percent increase from the previous 2011 survey, which showed that 8.9 percent of the participating students were current cigarette smokers.

Data showed that there were more boys who were smoking in 2015, with 17.6 percent admitting to be current cigarette users. This was an increase compared to the 12.9 percent figure in 2011.

The figure was lower for girls, with 7 percent admitting to be smoking in 2015. This, however, was also an increase from 2011’s 5.3 percent of teenaged female smokers.

The study however noted that the 2015 figures were still lower compared to the 2007 GYTS, which showed that 17.5 percent of Filipino youths were current cigarette smokers.

This means that from 17 million in 2009, the number of Filipino smokers went down to 15.9 million in 2015, according to the 2015 Philippines’ Global Adult Tobacco Survey (GATS).

The number of Filipino youths exposed to second-hand smoke in enclosed public places also decreased from 57.9 percent in 2011 to 54.2 percent in 2015.

Following the release of the survey, the DOH reiterated its call on the Department of Education to institutionalize tobacco control and prevention in the curriculum.

In particular, the DOH appealed to the DepEd to encourage non-smoking behavior among youth by re-integrating values formation in the curriculum, and to ban smoking within school premises.