Rizal and his ‘bff’: My finds in Czechoslovakia | Lifestyle.INQ ❮ ❯ 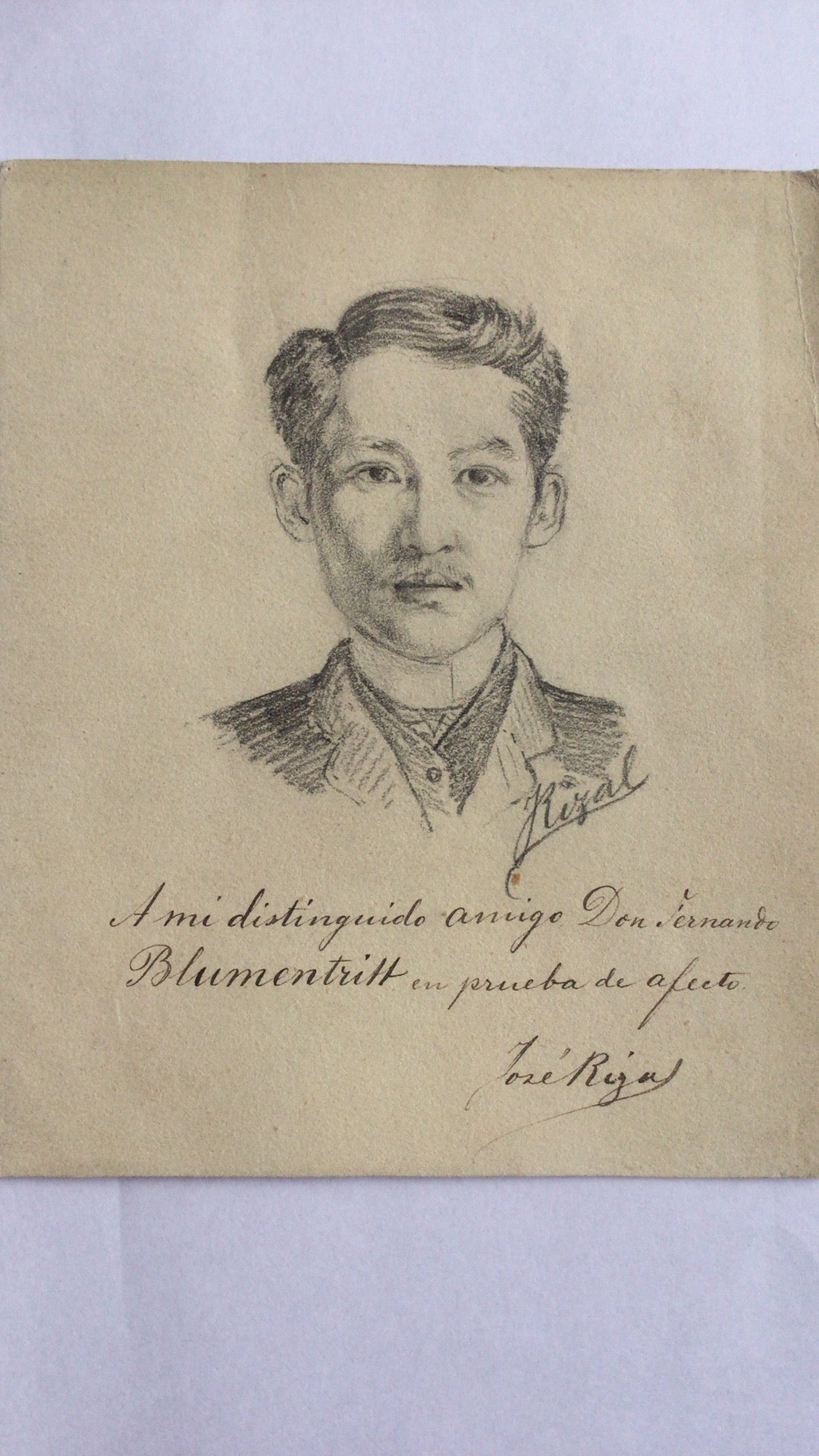 Rizal and his ‘bff’: My finds in Czechoslovakia

Blumentritt is a historic street in downtown Manila, an LRT station, and a public market named in honor of a 19th-century Czech schoolmaster who devoted the best part of his professional and personal life to the study of the Philippines.

While Ferdinand Blumentritt is not known to the average Czech citizen today, his name is familiar to most Filipinos, who know him from textbook history, as José Rizal’s BFF (best friend forever).

In the age before texting, Facebook, Twitter and Viber, theirs was a virtual friendship maintained through an exchange of over 200 letters documenting a decade, from the time Rizal began writing the “Noli me tangere” in 1886 to his death in 1896.

There is no bromance, no gay angle to the relationship viewed with raised eyebrows by people today, who cannot understand why two grown men would exchange personal letters that sometimes signed off with the courteous Spanish valediction or closing “s.s.q.b.s.m” (su seguro servidor que besa su mano)—in English, “your sure servant who kisses your hand.”

I set off last March on the trail of Rizal and Blumentritt on the invitation of Jaroslav Olsa, Czech ambassador to the Philippines, and the Czech Tourism office in Korea. I presumed the trip would merely validate what I already knew from three decades of Rizal research, only to realize that Blumentritt alone requires further research.

First stop was Litomerice, a small town 64 kilometers northwest of Prague, that I knew under its German name, Leitmeritz, when it was still under Austria. With Jed Dayang, charge d’affaires of the Philippine Embassy in Prague, we drove two hours to call on Litomerice Mayor Ladislav Chlupac, who had thoughtfully arranged to have the town’s ancient memorial book taken from the municipal museum to his office. There it was, opened to the page where José Rizal and Maximo Viola signed their names on May 16, 1887.
This month marks the 130th anniversary of Rizal’s visit documented in Leitmeritzer Zeitung, the town newspaper, on May 18, 1877 as follows:

“Today two gentlemen from the Philippines, Dr. José Rizal and Maximo Viola, arrived for a visit to professor Blumentritt. Both belong to the Tagalog branch of the Malayan race, and might be the first ones among their people to step on Leitmeritz soil. Under the able supervision of professor Blumentritt and Robert Klutschak, they saw places of interest in our city and signed their names in the memorial book of the city after they had been introduced to Mayor Gerbhardt.

“On Saturday evening, the gentlemen attended a board meeting of the Leitmeritz Mountaineering Club. The chairman welcomed the guests who came from afar. Mr. Rizal, who is not only an excellent poet but also an artist, responded in a speech that was as witty as it was thoughtful, and was received with approval by the audience. The two departed from here for Prague on Tuesday from where they will proceed to Switzerland through Vienna; there the two will go their separate ways. Don Maximo Viola will travel to Spain, Don José Rizal, who has been staying for 15 months on German soil in Heidelberg, Leipzig, and Berlin, the capital city of the German Empire, where he was designated as a member of the Anthropological Society there, will return via Naples, Suez and Singapore to his beautiful motherland.”

Four days in Litomerice, from his arrival on May 14, 1887 to his departure on May 17, 1887—that was the first and last time the friends would meet face to face.

In memory of this visit, two sites associated with Rizal in Litomerice are marked with bronze busts, and a small museum in an old bastion documents their friendship as well as the sister city agreements established between: Litomerice; Calamba, Laguna; and Dapitan, Zamboanga del Norte.

While one literally traces Rizal’s footsteps in Litomerice, Brno and Prague, the highlight for the historian is in Ceske Budejovice, capital city of Bohemia, where the regional museum provided me unprecedented access to 20 boxes of Blumentritt Papers from Ferdinand and his son Friedrich, an accomplished artist. Walking to the museum from my hotel made me realize that beer provides a link between our two countries. Ceske Budejovice is also known under its German name Budweis, that should remind Filipinos that Budweiser is a wonderful Czech draft beer, not the stale canned version of the United States that appropriated the name into an international brand.

“Pale Pilsen” is on the iconic brown bottles of San Miguel, a reference not just to a type of beer but to a place: Pizen or Pilsen, the Czech town in Western Bohemia where beer has been made by the Pilsner Urquell Brewery since 1842.

Having handled all the Rizal-Blumentritt correspondence at the National Library of the Philippines and knowing these were acquired by our government before the war, I was floored to find that Blumentritt heirs retained the more precious relics now at the Ceske Budejovice Regional Museum and City Archives: inscribed copies of the first editions of Rizal’s: “Noli me tangere” (1887), “Sucesos de las islas Filipinas” (1890), and “El Filibusterismo” (1891), the earliest printed versions of the “Ultimo Adios” printed in Hong Kong in 1897, etc.

Priceless are a self-portrait of Rizal in charcoal, and perhaps the most moving letter written on the eve of his execution:

“My dear brother: When you receive this letter, I shall be dead. Tomorrow at seven, I shall be shot; but I am innocent of the crime of rebellion. I die with a tranquil conscience. Farewell, my best, my dearest friend, never think ill of me!

“Fort Santiago. December 29, 1896. José Rizal. My best wishes to your family: Frau Rosa, Loleng, Curt, and Freidrich.” On the margin he added: “I leave you a book as a souvenir.”

Holding this farewell letter from December 1896 in my hands was an experience both professional and personal, reminding me of another letter from 1886 that accompanied the charcoal self-portrait, a letter significant because in it Rizal addressed Blumentritt with “Verehrter Freund” (Dear Friend) for the first time, dropping the formality of previous correspondence that opened with the formal salutation “Herr” (Sir), varying slightly from “Dear Sir” to “Esteemed Sir.”

In the end Rizal and Blumentritt addressed each other as brothers, establishing a personal bond that lies at the foundation of the current friendly diplomatic relations between the Philippines and the Czech Republic.

Two days I spent in the archives opening the many boxes and folders of Blumentritt material, realizing that Rizal unfortunately dominates the conversation.

It was disappointing, however, that the pen portrait of Blumentritt made by Rizal during his visit to Litomerice is missing, with the original sculptures and many other papers.

Fortunately, the loss of the Blumentritt portrait by Rizal is offset by another one, made by Juan Luna, who visited Litomerice from late March to early April 1899, a little known episode that requires new research.

A younger scholar should take time someday to go over the Blumentritt papers more thoroughly, with the Blumentritt artifacts in the Museum’s Ethnographic collection that I failed to examine for lack of time.
Rizal and Blumentritt is just one among many historical relations between the Philippines and the Czech Republic waiting to be unlocked. – all photos taken by the author