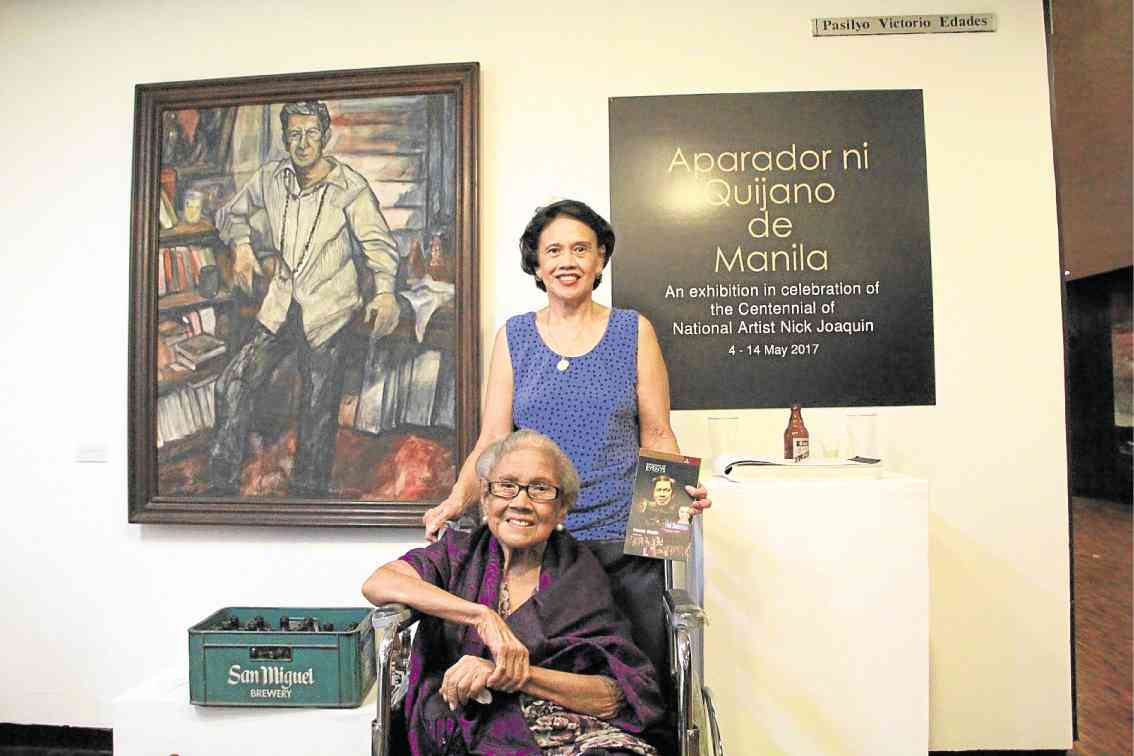 Elena Roco (on wheelchair) and daughter Marissa before Danny Dalena’s portrait of Nick Joaquin and beside a case of San Miguel beer. Roco, a retired mathematics and Spanish professor at UST, wasNJ’s “Muse” and beer buddy. —PHOTOS BY VINZ LAMORENA

National Artist for Literature Nick Joaquin is the greatest Filipino writer next to José Rizal.

This claim was made by National Artist F. Sionil José during Joaquin’s birth centenary celebration at Cultural Center in the Philippines (CCP) last May 4, during which the late writer’s friends and family gathered to honor and pay tribute to him.

Nick’s short stories and novels are required reading in high school. His most famous short story “May Day Eve,” a haunting tale about a young girl fated to a doomed marriage, remains foremost in the minds of Filipino readers. Now that the Penguin Classic editions of his key fictional works—“The Woman Who Had Two Navels and Tales of the Tropical Gothic”—are available, readers all over the world have the chance to discover and appreciate Joaquin.

He was also a poet and playwright. But according to his closest friends, he wanted to be recognized more as a journalist than a creative writer.

He was also known as Quijano de Manila, an anagram of his family name. He wrote the collection “Reportage on Crime” and the controversial “A Question of Heroes,” among other works of journalism and general nonfiction.

José first read Joaquin’s work in 1948 through a story that was published in the Sunday Evening News Magazine edited by N.V.M. Gonzalez.

“I was really awed,” said Jose. “And I really thought, This is the man to beat.”

José’s admiration for Joaquin went beyond affection. When Joaquin died of cardiac arrest in 2004, José cried.

“Nick Joaquin was a living keeper of our national memory,” said Jose. “This is what all writers do, whether they are lousy or excellent. They are the keepers of memories. Without this memory, there is no nation.”

Writer, poet and editor José “Pete” Lacaba was one of Joaquin’s longtime buddies. He started out as a proofreader in the Philippines Free Press where Joaquin was the editor in chief. They developed a deep friendship.

In 1974, two years after President Ferdinand Marcos proclaimed martial law, Lacaba, then 29 years old, was arrested. At the time, Joaquin would accompany Lacaba’s wife, Marra PL Lanot, to look for him.

Two years later, Joaquin was chosen National Artist for Literature, which was instituted under the Marcos administration. He refused the award as a protest against martial rule. But his friends saw it as an opportunity to get Lacaba out of prison.

“The story is that he made that a condition,” Lacaba recounted. “Someone suggested that he can accept the award first, then tell Marcos about my release. Marcos accepted the condition and said that Lacaba’s release would be part of Joaquin’s prize. Then the following day, I was out of prison.”

Elena Roco, a professor at the University of Santo Tomas, was introduced to Joaquin when she tagged along with a female friend who was picking up her husband from the Free Press office. Roco and Joaquin learned they were neighbors in San Juan.

So, every Sunday morning, they would go to Mass together. That was how they became friends.

After that, they would go out together a lot. People started to mistake them for lovers. In fact, the parish priest in San Juan came to Roco’s place to inquire about the gossip.

“I said to Nick, ‘We do love each other, don’t we? I love you, and you love me,’” she said. “But there was nothing romantic or malicious about our relationship. We were simply best friends.”

Everyone who personally knew Joaquin was aware that he was never without his beer. After going to Mass, he would be in his room writing while drinking cold San Miguel Pale Pilsen.

He had a column in the Philippine Daily Inquirer called “Small Beer.” Metaphorically, small beer is something trivial or unimportant.

His niece Charo Joaquin recalled that one her chores was to bring his Uncle Nick fresh beer every so often.

“Morning is always reserved for his writing,” Charo said. “And, yes, he would consume a few beers. After his siesta, he would be off to do his press work, his research, his interviews, and piano-bar-hopping. The next day, I would get a pasalubong from him.”

One of the many things Charo admired most about his Uncle Nick was that he never stopped learning or reading.

A formidable presence, Joaquin had a booming voice. When he was out with friends, he would be loudly singing Cole Porter. But despite his seemingly intimidating personality, Lanot did not find him scary at all.

“Later on, I found Nick to be a very shy person,” she said. “He spoke loudly, but he was a very secretive man. And he never, ever talked about himself, mind you. His achievement, his work, never. He was more interested in the people he was talking with.”

Poet Luis Francia said Joaquin was the type of person one could joke around with.
“Nick never made you feel he was superior to you,” he said. “So you feel you could talk to him. He was very fun to be with.”

Cecille Joaquin-Yasay, one of Joaquin’s nieces, said that, growing up, they were not aware of the great artist in their midst.

“While he had many laurels to his name, he remained painfully shy; never comfortable with attention or recognition,” she said. “He was a private person who does not like to get his picture taken. His personality was ethereal, yet his writings present a profound picture of the man in his world that is both encompassing and timeless.” —CONTRIBUTED