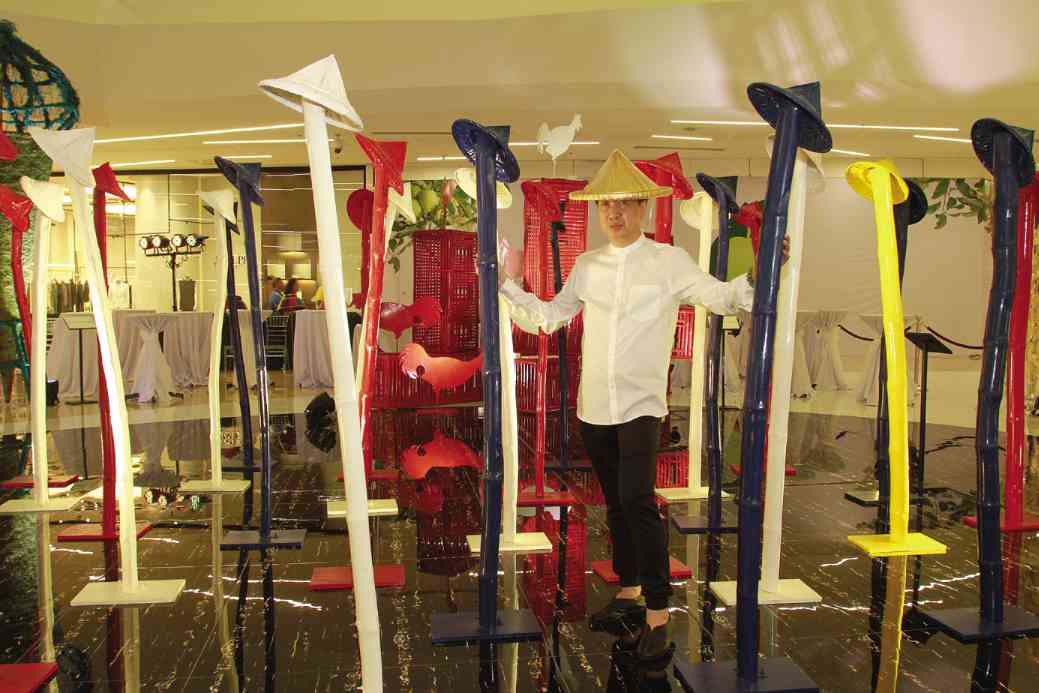 Rachy Cuna’s zest for life is shown in his works. —NELSON MATAWARAN

Rooster cages in a high-end mall?

It is just one of nine installations in an exhibit, “Arte Filipino,” organized by the Filipino Heritage Festival Inc.

Painted in the colors of the Philippine flag, bamboo trunks are crowned with tiny salakot, wide-brimmed conical hats from Mindanao. Rachy explains that some of the bamboo are bent to represent the Filipino’s humility and flexibility, and resiliency in difficult situations.

The installations show his range as an artist and his resourcefulness in gathering materials and working with different artisans.

“Hulog ng Langit” (Fallen from Heaven) is a cascade of rattan vines with fossilized leaves and flowers. Rachy says rattan is one of his favorite materials for its malleability.

Although Rachy does paintings only as commissioned projects, for this show he gladly shows his art with the public.

“Grande Flora” is a mixed-media work which pays tribute to the shape of the phalaenopsis. Set against an apple green acrylic background are abstractions of the orchid, filled with jade, crystals and amethysts.

Rachy always makes the ordinary seem special in his treatment.

In “Salu-Salo” (Gathering), the simple table setting of white enamel plates is set against a saffron-painted table he found in a flea market. The legs don’t match as two of them are built on top of hollow blocks.

A master of exaggerated proportions, Rachy designed a wire cover that protected the entire table top.

“Sorbetes Pinoy,” yet another food theme playing on exaggerated proportions, is a 20-ft tall cone made of woven moss and swirls of pandan leaves evoking the ice cream scoop.

Rachy also explores metal sculpture in two humorous installations. The wire face of a woman with matching lashes is topped with bingo baskets for her hair and bingo cards for earrings.

Metal silhouettes of Igorot dancers show their outstretched arms draped with Cordillera textiles. Instead of war plumes as headdress, they are capped with antique native baskets with tiny coconut trees.

Rachy started out his career in the ’70s curating and organizing events for the Ayala Museum. Soon he earned a reputation for dramatic floral arrangements.

Over time, his creativity, wit, lightness and generosity of spirit landed him decorating and styling jobs. Rachy was thrust into the limelight when he created table settings for the book launch of “Entertaining with Ease: Etiquette and Protocol for the Modern Filipino,” by Ada Ledesma Mabilangan.

Over the years, he has done projects for the late society doyenne Imelda Cojuangco and special projects for businessman Manuel V. Pangilinan.

For the Manila visit of Pope Francis in 2015, Rachy made an art installation of San Francisco flowers and rattan baskets in front of the altar at the Quirino Grandstand.

Rachy Cuna is currently Manila Hotel’s design director. He aims to revive the Old World elegance that once defined the hotel known as the Grande Dame. “We have more casinos but they don’t show much of our culture,” he says. “The hotel should reflect Pinoy pride.” —CONTRIBUTED