‘This guy is phenomenal’: How Gerald Santos won the role of Thuy in ‘Miss Saigon’ UK | Inquirer Lifestyle ❮ ❯ 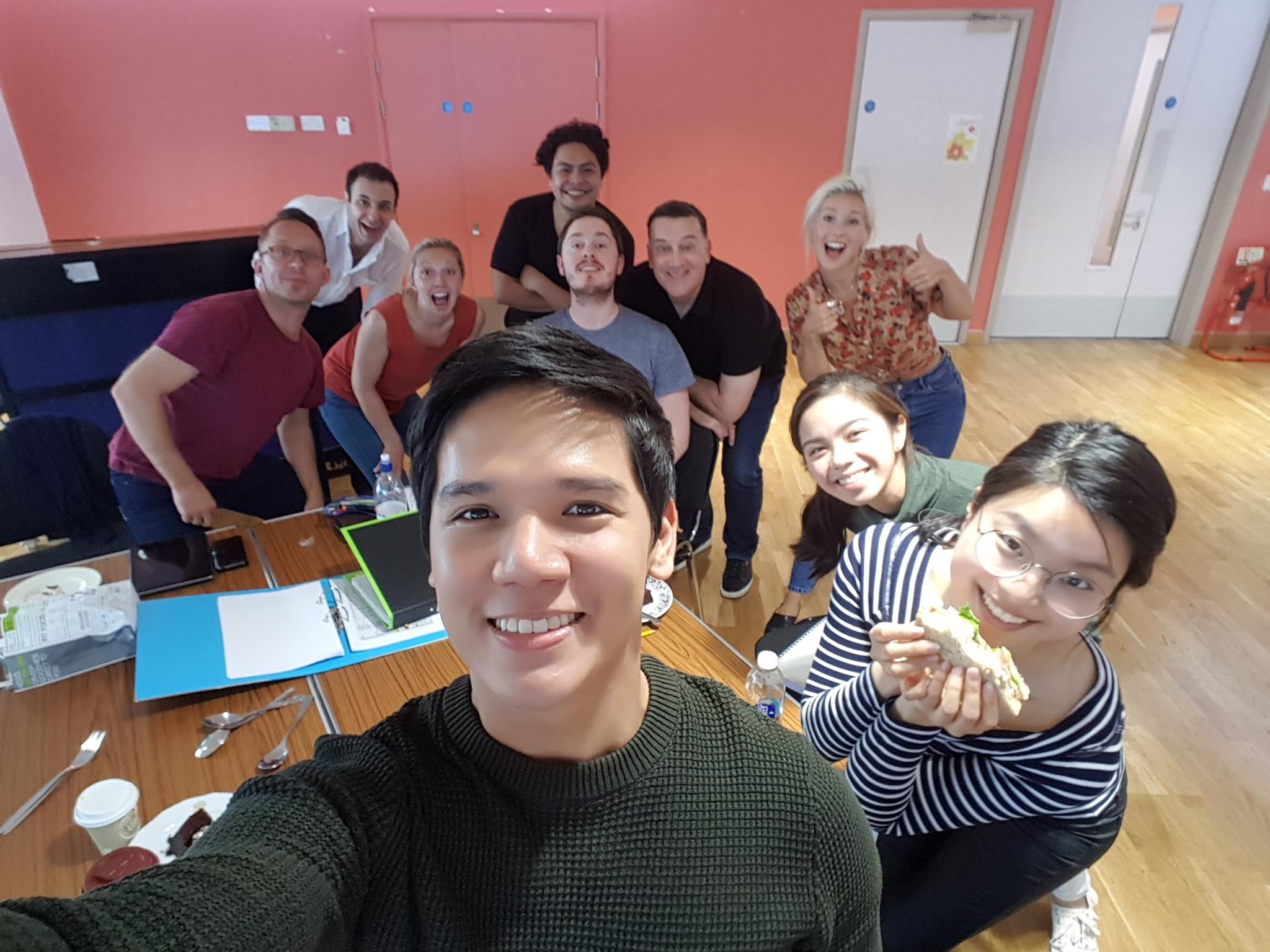 In London, with director Jean Pierre Van Der Spuy (in maroon shirt) and other co-actors and production staff during rehearsal break; Red Concepcion (The Engineer) is at the back, in black.--ALL PHOTOS FROM GERALD SANTOS' INSTAGRAM

‘This guy is phenomenal’: How Gerald Santos won the role of Thuy in ‘Miss Saigon’ UK

“Pop singer” and “pop balladeer” kept popping up in an earlier conversation with Gerald Santos, the newly chosen Filipino talent to play Thuy in the “Miss Saigon” production that will tour the United Kingdom and Ireland starting first week of July this year.

He shares the news in an almost apologetic tone, as if he’s stepping on a sacred territory.

Santos will play Thuy with no alternate, eight times a week, and doing it twice on two days for matinee and gala performances. His contract will last until April 2018, but there’s an option to extend.

It’s been a long way for the boy whose talent in singing was discovered at age 7.

Throughout his growing-up years, he joined and won amateur singing contests, reaching as far as Laguna. “I think, more than once, Charice Pempengco and I were in the same contests. But I remember I competed more with her (now ex) girlfriend Alyssa Quijano, who’s also from Navotas.”

When “Miss Saigon” was staged at the Cultural Center of the Philippines (CCP) in 2000, Santos was only 10 years old. For him, Lea Salonga, the original Kim and who topbilled the CCP run, was someone he saw only on television and later in films.

Santos was propelled into national consciousness in 2005, when he won the grand prize in the second season of GMA 7’s “Pinoy Pop Superstar.” Aicelle Santos (“Katy,” “Rak of Aegis”) was the first runner-up in that batch.

He would go on to record five studio albums and perform in countless concerts. When he transferred to TV5, he found more free time and tried musical theater.

In 2011, he was handpicked by director Tony Espejo of Gantimpala Theater Foundation to play Pepe, the lead role in Nonoy Gallardo’s “Sino Ka Ba, Jose Rizal?,” which played at various venues in Pampanga, Antipolo and the AFP Theater in Quezon City. It was Santos’ baptism of fire in theater; Espejo described his interpretation of Pepe as “visceral.”

His next project was a musical based on the life of Filipino saint Pedro Calungsod. “San Pedro Calungsod, The Musical” opened October 2012 at the Peta-Phinma Theater in Quezon City, directed by Joey Nombres for Mga Artista ng Teatro ng Pilipinas and Prinstar Music Philippines.

Santos recalled he initially did about 10 shows, including those toured in schools in Pampanga and Nueva Ecija. Eventually, until 2016, Santos’ life would revolve around “Pedro Calungsod,” with a touring show produced independently by Red Life Entertainment Inc. and directed by Cocoy Ramilo, who also did the libretto. Santos would do two shows a day because he had no alternate or understudy.

“There was a time I did three shows in one day—morning, afternoon and night—in Notre Dame University in Cotabato. And we toured ‘Calungsod’ for two years in Davao, Cebu, Pampanga, Nueva Ecija …,” he said.

Santos now believes those gruelling years of touring were what prepared him for “Miss Saigon.”

The intense eight-day selection process for “Miss Saigon,” held middle of March last year, reportedly had around 900 auditionees, among them big names in local theater and pop music. Santos was among the hundreds who lined on the first day.

When he sang his audition piece, “Kim’s Nightmare,” he was told to stop after about 40 seconds.

“Nabigla ako kasi wala pang one minute yung kanta ko. Ang dami pa kasing nakapila. We were there at 10 a.m. and they let us in at around 11 a.m. I was called to sing at 4 p.m.,” Santos said. But he remembered casting director Paul Woller saying, “That’s actually pretty good, you’re done.”

He thought the remark was just standard British politeness and prayed to get a callback slip. He did. On March 18 for the second round, he sang “Thuy’s Death” and “Thuy’s Intervention.”

In the middle of the dance session, he was called to a separate room where there were only the London search team, among them musical supervisor-conductor Stephen Brooker, casting director Paul Woller and “Miss Saigon” director Laurence Connor.

“Nagulat ako kasi, they began coaching me. Kung paano i-attack ng tama. May pinabasa sila telling me ‘That’s how you’ll sing it, just like you’re saying it…’ Dig deep into the character. Ganito attack. Hindi villain si Thuy. It’s not like you want to kill Kim here. You’re also just a victim of the situation.” He was asked to sing Thuy’s three songs four times.

On March 23, Santos was back for the final callback with composer Claude-Michel Schönberg himself.

With Ceejay Javier on the piano, Santos sang “Thuy’s Intervention.”

More notes from Schönberg: “Be attentive, always be ready with your lines. Let’s do it again, I want to hear you more.” Schönberg also asked him if he knew Thuy’s lines in the “Back In Town” segment. The composer was apparently testing Santos’ ability to learn his lines fast and spontaneously.

Schönberg asked Santos to learn the scene; “he told me he didn’t care how long it would take,” said Santos. “Lumapit siya sa akin and explained to me the ‘Back in Town’ scene. Three years siya nawala, you should feel the longing, the sadness but also the happiness …”

Schönberg’s strictness would eventually turn into approval. In front of Santos, when Connor asked Schönberg what he thought of their new Thuy prospect, Santos recalled Schönberg saying, “This guy is phenomenal. Gerald, thank you for your hard work.”

Santos went home that day as if he was floating on clouds. That night, he got a personal message from one of the Filipino members in the production staff, quoting Schönberg: “That guy is amazing.”

Santos got the news on December 23 last year. He was about to perform in a family gathering, and he remembered not being able to speak for a few minutes.

“It was the best Christmas ever.” —CONTRIBUTED