Father writes book for daughter to show characters that look like her | Lifestyle.INQ ❮ ❯ 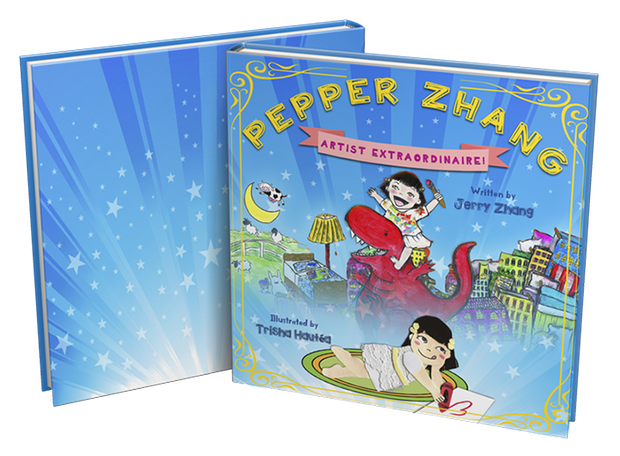 While reading children’s books can be a time for bonding between parents and children, Jerry Zhang was forced to take it a step further when his daughter didn’t identify with any of the characters in the stories.

The Chinese-American father of two was faced with a harsh reality: “She told me she didn’t want to be Chinese anymore, and it broke my heart,” Zhang shared. He said Madison was a huge fan of blonde- and red-haired characters and wanted to be like them.

He cited that he tried introducing Madison to other books on Chinese girls, but since they were too “heavily cultural” she didn’t identify with them either.

The writer and lawyer was thus prompted to write his own children’s book to represent his daughter and ultimately, all Asian-American girls. “Pepper Zhang: Artist Extraordinaire!” follows a girl who refuses to go to bed and discovers she has a unique artistic talent.

Zhang took to crowdfunding site Kickstarter to independently publish the book and intends it to be a series. “Isn’t it about time for an illustrated book series starring a quirky and imaginative Asian girl?” he posits.

He brought up startling statistics on representation in children’s literature: “In 2016, out of 3,200 children’s books published in the United States, only 7 percent featured Asian children—yet there are 17 million Asian Americans in this country.”

Besides Asian-Americans, girls are far underrepresented in children’s books: a 2011 study showed that of 5,600 books, only 31 percent had female central characters, reported The Guardian. Lead researcher Janice McCabe, associate professor of sociology at Dartmouth College said that the lack of female characters “contributes to a sense of unimportance among girls and a sense of privilege among boys.”

Zhang’s efforts could contribute to a movement that is increasing the representation of minorities in children’s media. The hardbound book, filled with bright, “hand-crafted” illustrations received pledges of over $30,000; Zhang’s goal was $5,000. “My broader mission is to bring “Pepper Zhang” onto the bookshelves of libraries, book stores, schools and homes of children all across America and beyond!” said Zhang—and it looks like Pepper is well on her way.