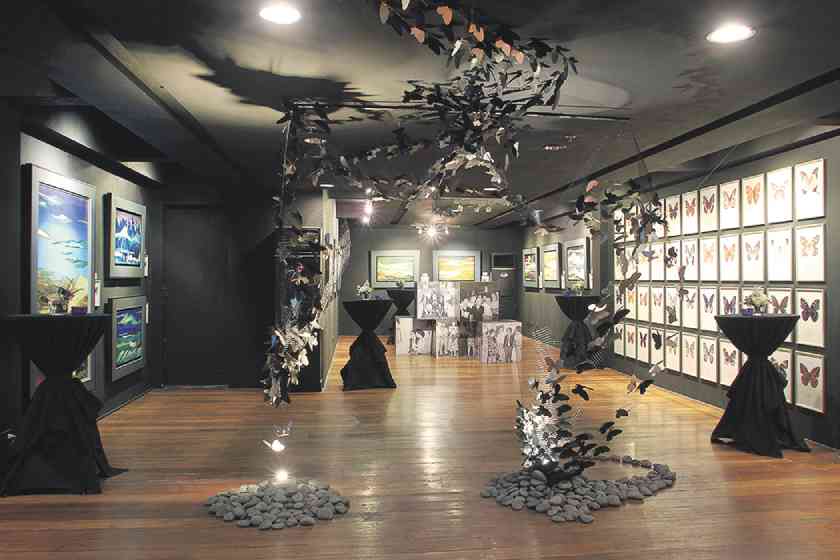 The artworks and butterfly photos are set against black. Butterfiles swirl from honeycomb wires. Memory cubes serve as glimpses of Nuyda’s past. —PHOTOS BY NELSON MATAWARAN

The exhibit is like no other. Instead of antiseptic white walls and ceiling, the gallery of LRI Plaza has been washed in black to allow the paintings and photographs of rare butterflies to pop out. A swarm of laser-cut paper and metal butterflies swirl from the pebbled floor to the black ceiling.

As if they weren’t enough, there are portraits of Nuyda by photographers Patrick de Koenigswarter and Rupert Jacinto and a blowup of Nuyda’s works at Greenbelt which were taken by Don Jaime Zóbel.

In his 52-year career as a painter, Nuyda claims he has never seen an exhibit that is as innovative and as comprehensive as “13,” the 13th anniversary show of LRI Plaza.

Designed and curated by Adefuin Design Studio and furniture-maker Sigvard Collections, the biographical show pays homage to Nuyda’s dedication to lepidoptery, the study of butterflies and moths, and his signature painting style, inspired by impressions of his butterfly-hunting trips around the Philippines.

Interior designer and art collector Jigs Ranada Adefuin explains the project was the outcome of his friendship with the artist.

The first phase portrays his childhood and family life in the province and a photo of a 6-year-old Nuyda holding his first butterfly net. The second phase shows his early butterfly expeditions.

The last phase documents his first award from the Arts Association of the Philippines in 1968; early exhibit openings; group shots of fellow artists; the CCP Thirteen Artists awardees, and the Saturday Group, both of which he was a pioneer.

The artist cites journalist Alfredo Roces’ columns as one of the more significant ones.

“He booked me at Solidaridad Gallery where I had my first-ever one-man show,” recalls Nuyda.

A significant part of the exhibit shows Nuyda’s life work as a lepidopterist. About 110 photographs of rare butterflies from his collection are mounted in matte silver frames.

In 1968, he discovered one of the rarest butterflies in the world, so it was named after him: Liphyra brassolis justini.

One corner shows a microscope to detect the butterfly’s gender; the Fil-Kulisap, the specialized magazine which he edited, and stamps showing his collection.

Nuyda explains his fascination for butterflies was born out of its prodigious variety in the Philippines.

Painted in warm neutrals and earth tones, “Field of Dreams” depicts swelling clouds over a barren land filled with spikes.

“There are no greens. It’s my statement about deforestation,” says Nuyda.

“Fortress of Solitude” sets off the mood of isolation with the use of cool colors. Gradations of violet to lilac serve as background to the pleated dark-blue strokes with white highlights.

“Morning Calmness” is a picturesque impression of Mount Parker and Lake Maguhan. Undulating white strokes break off the uniformity of burnt sienna tones of the hills. The subtle blue tones of the lake contrast the dark-blue colors of the sky.
“You can’t go wrong with the colors of nature,” says Nuyda. —CONTRIBUTED