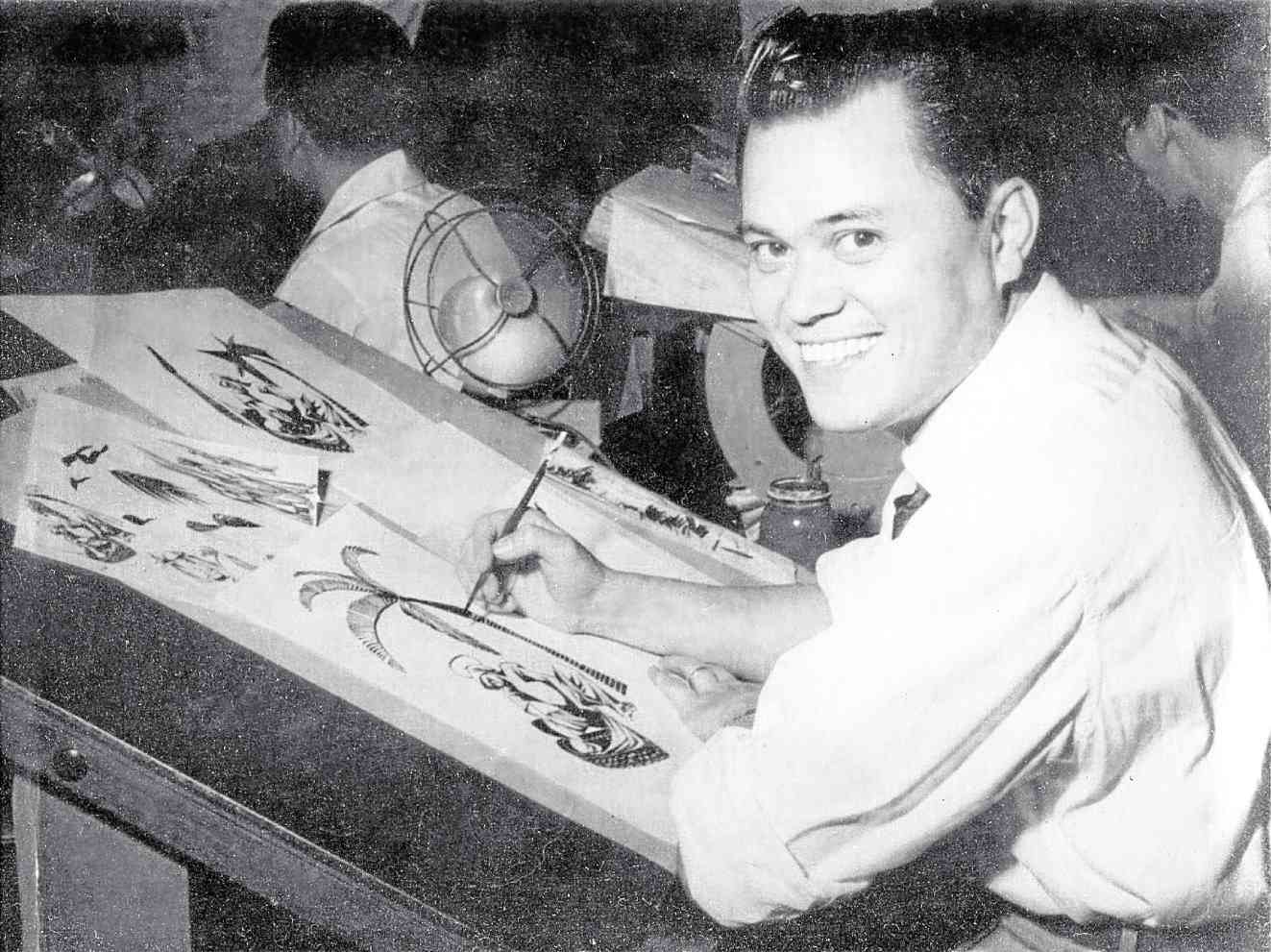 There is no doubt that the artwork standing quietly in a corner of Cultural Center of the Philippines (CCP) portrays Imelda Marcos. The signature bouffant, terno with exaggerated butterfly sleeves… But wait, is she wearing three shoes instead of two? And is her brooch the lid of a mayonnaise jar?

Eileen Legaspi-Ramirez remembered “jumping up and down” when a scion of the art collector who owned the work agreed to lend it for the celebration of the birth centennial of her grandfather, Cesar Torrente Legaspi, National Artist for Visual Arts.

The work, “Portrait of Imelda Marcos,” done in 1987, is one of two assemblages (three-dimensional collages) that the collector purposely kept hidden from friends and family.

The other, called “Great Hero,” is a “thinly-disguised parody” of the late dictator Ferdinand Marcos’ fake World War II medals.

Granddaughter Eileen—art critic, curator and assistant professor at the University of the Philippines (UP) Department of Art Studies—and partner Claro Ramirez Jr. put together the exhibit, “Lying In State” (available for viewing until June 4) at CCP and initially asked to borrow “Great Hero” for Legaspi’s 100th birth anniversary.

“Ayaw pahiram. The owner, whose family feels very indebted to the Marcoses, found it too controversial and didn’t want the image shown in public,” Eileen said. “The ‘war medals’ used were tansan (soda bottle caps).”

Born in 1917, Legaspi or “Mang Cesar” would have been 100 last April 2. Schooled in formal art at UP and through extensive studies abroad, he later found himself in the group of Filipino modernists or neorealists that rose to popularity during the martial law years.

In separate interviews with Eileen and the artist’s daughter, singer Celeste Legaspi-Gallardo, it was evident that Mang Cesar was not comfortable with the attention that then First Lady Imelda Marcos bestowed on the modernist painters.

(While Mrs. Marcos was widely praised for giving attention and government resources to art and culture during the dictatorship, she was also criticized for using local talent as propagandists for her husband’s New Society agenda.)

“The exhibition wagers that perhaps the best way to honor a National Artist is to come clean about how… his artistic life became enmeshed in the working of state propaganda and the myth-making machinery upon which politicians continue to rely to keep a semblance of nation operative,” Eileen said.

Eileen, then a young girl, once witnessed her lolo “become irritated” after Mrs. Marcos sent back a pastel-on-paper portrait she commissioned in 1978.

The work had Mrs. Marcos sitting gracefully on her left side in a delicate white lace camisa and apple green skirt. The skirt covers her long legs but her sandaled right foot is exposed.

Eileen recalled the First Lady did not like herself drawn with an up-do, preferring to see her hair falling down her shoulders “para mas goddess ang dating.” She also wanted the artist to elongate her fingernails and her toes.

The granddaughter was already in high school when Legaspi did the assemblage of the Marcoses. Although she remains unsure whether the pair was commissioned or was a gift from her lolo, Eileen recalls being in her grandfather’s studio when he was creating the artwork of Mrs. Marcos.

Did he enjoy portraying her with three feet? “I believe so,” Eileen replied. “There’s a very naughty aspect to my grandfather… I was not surprised at all.”

Daughter Celeste may have referred to the whimsical portraits commissioned by the then First Lady when she told Lifestyle: “My father was doing things for Imelda because they [artists] couldn’t say ‘no.’ Nobody could.”

The CCP exhibit includes Legaspi’s works from the martial law period that were subtle commentaries on the times.

“Struggle,” an oil-on-wood from 1978, features muscular men pushing back a boulder that threatens to crush them. Eileen said the work depicts the “struggle and torment happening at that time, an indication that my grandfather was not oblivious to what was happening in the country.”

“Conquerors,” “Descent” and “Survivor,” done in the early ’80s, echo the same theme, she added.

Celeste said it was understandable that her father chose to keep it low-key.

“He was raising a family, he was afraid just like the rest of us, but was brewing inside,” she noted.

Celeste was one of the country’s most popular singers during the dictatorship. Despite her thinly-veiled song “Saranggola ni Pepe,” which skewered Marcos and his henchmen, Celeste herself was a favorite of the Marcoses, invited to join out-of-town trips to sing at the First Lady’s behest.

The singer remembers how, at one point, she suddenly broke down upon coming home from one of those gigs for Mrs. Marcos.

“I took a bath and suddenly I was crying,” she recalls. I realized I had to make sipsip… At times magdu-duet siya with me, siyempre you cannot be good. She has to be better. It was terrible, I hated myself.”

Celeste remembers how proud her father was after she joined Jim Paredes and other artists who trooped to Edsa and the government station channel 4 in the 1986 uprising to protest the electoral fraud committed by Marcos.

“That was the first time I heard him say anything political,” she said.

Observers noted the irony that Legaspi was given the National Artist award after Edsa 1.

“Perhaps partly because of his reticent nature,” Eileen surmised about her lolo keeping under the radar every National Artist scouting season.

When he finally received the plum in 1990, President Corazon Aquino said: “We in government do not intend to use artists for our own ends. This was done by the dictatorship that was overthrown by Edsa.”

(Legaspi’s heirs had his remains disinterred from the Libingan Ng Mga Bayani last year after President Duterte allowed the burial of Marcos in the heroes’ cemetery. The dictator’s remains were buried in November 2016.)

Even before the Marcoses came to power, Legaspi was already a presence in the local art world. His iconic piece, “Gadgets II,” completed in 1949, was his oil-on-canvas prediction of how man would eventually metamorphose into a machine.

Celeste thinks her father would be active in social media, given the prevalence of technology in daily life, had he not succumbed to prostate cancer in 1994.

The daughter added that Legaspi did not lose his sense of humor even after he became more spiritual during his final years.