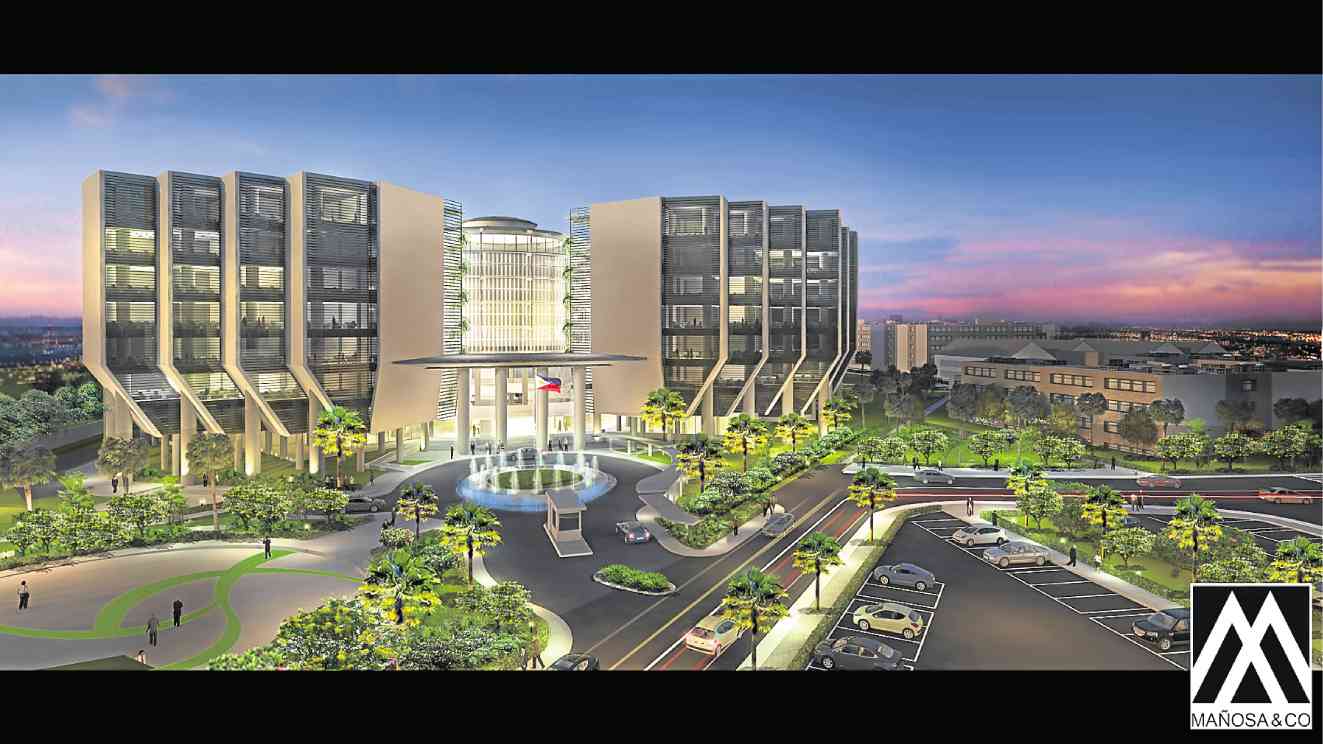 A contemporary, eco-friendly design by Filipino architectural firm Mañosa & Company has won the International Conceptual Design Competition for the new Supreme Court complex, which will rise on a 2.1-hectare site in Bonifacio Global City.

The winning design was chosen among 10 finalists—local and international architecture firms—by a jury consisting of all 15 Supreme Court justices in an en banc session.

In the parameters for the contest, the Supreme Court called for a “culturally iconic building and a legacy for generations to come.” In keeping with tradition, the rules stipulated that the design had to incorporate the traditional “four pillars of justice,” namely: prosecution, law enforcement, corrections and the community.

The competition also required that the design be for “a green and resilient building for the effective and efficient dispensation of justice.”

Sustainability was front and center in the design considerations. Not only should entries have the smallest carbon footprint possible, but the parameters also called for the incorporation of environment-friendly design features and the maximum use of alternative sources of energy, such as solar, wind and biomass.

As it turned out, the contest rules played to the Mañosa firm’s strengths: not only has it built its reputation on contemporary Filipino design, it has also become known for practicing green architecture, with designs that incorporate passive cooling, natural lighting, water reuse and recycling and the use of locally-sourced building materials.

Taking its design cues from the sun motif on the Philippine flag, the winning design envisions a new Supreme Court complex consisting of three building clusters surrounding a central, circular tower which will house the En Banc Session Hall, the heart of the court’s operations.

In keeping with the Supreme Court’s dual function, as the highest court of the land and the administrator of the country’s entire court system, one of the clusters will house the chambers of the 15 Supreme Court justices, while the other two will house the offices for the staff and employees.

All these will sit on a sprawling complex that includes a central plaza and other public areas, a system of roadways and paths, and bridges linking the various structures.

“We went for a timeless design that evokes the historic associations of the institution, while also being relevant to present-day lifestyles,” says lead architect Angelo Mañosa.

“As the home of the judiciary, one of the three co-equal branches of government, our design for the new Supreme Court complex projects the dignity and grandeur of the institution. At the same time, the contemporary Filipino design projects vibrancy, modernity and a progressive outlook as key hallmarks of our open, democratic society.”

Because the site is only three kilometers from Ninoy Aquino International Airport and directly under many of its flight paths, sound insulation was one of the primary design considerations, specially for the En Banc Session Hall and the auditorium where important hearings and meetings are expected to take place.

Most of the energy consumed by modern buildings is used for temperature control and lighting. Significant energy savings can be realized by designing passive cooling and natural lighting features into the buildings and the grounds.

For instance, the arrangement of the building clusters around a central tower, with an inner courtyard and numerous corridors, allows maximum air circulation throughout the complex and prevents the build-up of heat.
Additionally, the buildings are supported by stilts, creating an additional space underneath for more air circulation. Additional cooling is provided by greenery and water features such as a moat that also serves to enhance security.

Other design features minimize the heat from the sun while maximizing its light. A system of sunshades and windows made from a special “dynamic” glass that adjusts to the direction of sunlight minimizes heat gain. Meanwhile, reflectors direct sunlight into the buildings’ interiors to provide natural light, minimizing the need for artificial lighting.

Finally, the design includes a solar farm, a system of solar panels on the roofs that harvests sunlight, turning it into solar energy for running some of the building utilities.

All of these features combine in a comfortable, convivial space that should enhance workplace productivity, and set the benchmark for government building design, says Mañosa.

The Supreme Court is now on land owned by the University of the Philippines. The government has earmarked P3.28 billion to fund the design and construction of the new Supreme Court Complex over a period of four years.

Although Mañosa & Company won the design competition, the contract still has to be bidded out according to government procedures.