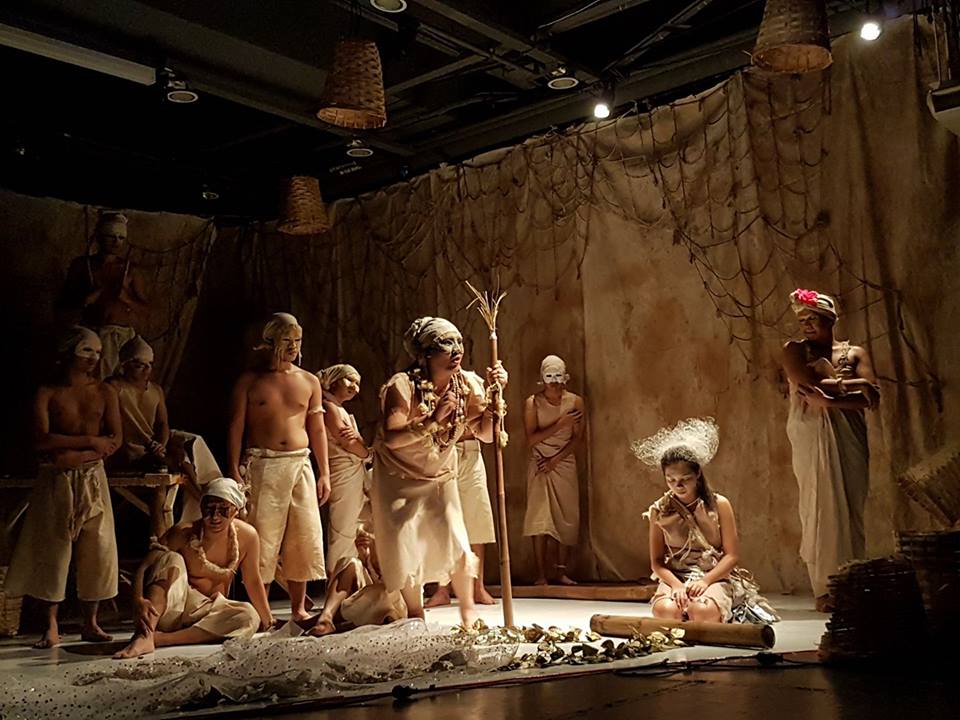 The frisky month of May: ‘Smaller’ productions of adventurous creativity

This month, with major companies seemingly on a summer break, I caught mostly “smaller” productions.

It was still an amazing range of sophisticated creativity. One can see how adventurous our young theater practitioners and young theater companies have become; how well and truly plugged in to the universe of cultural idioms and styles they are, and how adept they are in appropriating these for local themes and talents. It makes a viewer all the more excited over the foreseeable future.

Since I had been so entranced by their “Makikitawag Lang Ako” two years ago, I was intent on catching the new Far Eastern University Theater Guild’s adaptation of yet another Gabriel Garcia Marquez story—into a musical at that! The mouthful-titled “Ang Pinakamakisig sa Mga Nalunod sa Buong Mundo” was adapted from a typically elegiac Garcia Marquez tale (“The Handsomest Drowned Man in the World”) about a man washed ashore in a “timeless” village and how it changed the lives of its inhabitants.

Director Dudz Teraña crafted the story into an outstanding production with beautifully atmospheric stage and costume design (I had no program but I wish I knew who did the design) and evocative music to match. I did find the story rather static and, honestly, I did not see the point of the gender-bending casting of males in women’s roles.

Nevertheless, the student ensemble delivered heartfelt performances, and I do not know another local group that successfully captured the Garcia Marquez magic-realist combination of otherworldly ambience and grounded human tragicomedy. If anything, it was an incentive to catch more of this group’s future productions.

Theater of the absurd

I very nearly skipped the twinbill “The Xplicit Show” at the University of the Philippines, coming as it did right after Dulaang UP’s outstanding “Angry Christ.” I was wary about having my euphoric mood dissipated, but it proved to be an outstandingly brave production of a daring material, very finely directed by Fitz Edward Bitana (listed as his thesis effort—turned out he is still a student)!

Both pieces were exemplars of the Theater of the Absurd, by their nature, devilishly difficult to pull off without confounding the audience. I was particularly amazed by the Edward Albee adaptation “Sylvia Q” and how its ostensibly outrageous story (a man in love with a goat!—no, seriously) rose above sniggers into a wrenching human drama.

I have to pay tribute to Eljay Castro Deldoc’s adaptation of Albee’s “The Goat, or Who is Sylvia?” but even more to the wonderful acting of the quartet: George de Jesus III, Karenina Romualdez, Jerome Ignacio and Jules de la Paz.

I confess I was less taken by “Matyag” (Jean Genet’s “Deathwatch,” adapted by Pat Valera) whose alienating material (a tangle of power and sexual predation in the stifling confines of a prison) I found harder to relate to or even completely grasp. But Bitana’s direction and the passionate performance of the young cast captured the claustrophobic, even miasmic, convolutions of the piece. I suppose my very alienation was a measure of the production’s success.

Out of the box

The most audaciously out-of-the-box production I got to watch (if only partially) was UP Repertory’s “Walang Katapusang Godot.” Staged in a bare, almost dingy multipurpose center in Pook Dagohoy next to the UP campus, it sought to recreate life conditions in a local mental health facility for the disadvantaged, inspired by a direct experience of the young director Eshei Messina.

The whole production lasted a staggering eight hours, but structured in three “waves.” I only caught one two-hour wave, but what an in-your-face experience it was. Ostensibly based on Samuel Beckett’s “Waiting for Godot,” (in the Rolando Tinio translation) this wave, at least, had little, if any, of Beckett’s actual text, but it most certainly enfleshed the tedium and pointlessness of the “waiting.”

For two hours, we, the audience, stood, walked about or sat on patients’ cots in the drab room watching some 10 boys and men, ragged, unkempt and shirtless, in various catatonic or manic states, obsessively drawing on walls, stumbling about in circles, mumbling religious mantras, flailing at each other over a jug of water and spilling pathetic rations.

One might expect to be overwhelmed with the pitiful tedium, but, in fact, I found it both absorbing and harrowing, not to say discomforting. What gave the performances life was that the denizens were no generic “baliw,” but were acted out as real individuals, each with his own quirks and tics, and all trapped in an awful purgatory of “waiting.” One felt drained after two hours, yet I confess to being sorely tempted to stay for the other waves.

Quite a contrast was The Egg Theater Company’s social tragicomedy of middle-class relationships and breakups, “Kung Paano Maghiwalay.”

Structured as a series of vignettes of interrelated characters coping with a whole variety of forms of falling in and out of love, it was like a minuet of humor and satire and sentiment, intricately scripted and directed with panache by George de Jesus III.

Not all the vignettes were equally effective and, at times, they seemed to run into each other. But taken all together, it was an affecting and colorful human tapestry. It could be seen as a modern comedy of manners pitched to millennials, except that it had more than an admixture of tragedy.

By far, the best thread was of the wonderfully moving older couple played by real-life husband-and-wife Juliene and Stella Cañete-Mendoza. The close of the first act revealing the nature of their “breakup” was the emotionally devastating highlight of the play, and Cañete-Mendoza’s performance was absolutely riveting.

The second act did not quite match the impact of the first. And while winningly comedic and sentimental by turns, the younger performers’ “hugot” ultimately paled beside the complex depth of the senior couple’s relationship and the much deeper pain of their separation. —CONTRIBUTED