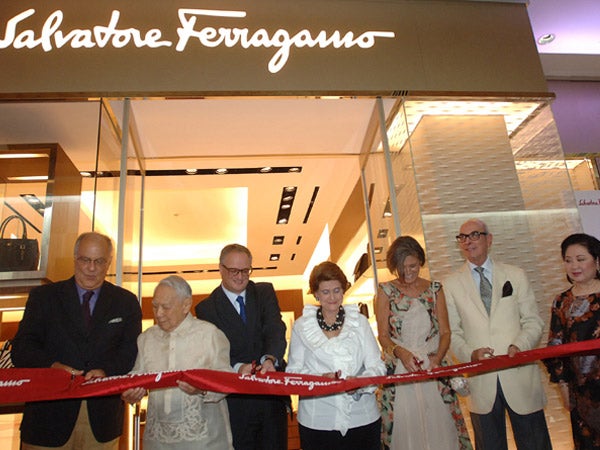 Finally, bespoke women’s shoes from Ferragamo; next year, men’s, too

Launched here Thursday, coinciding with the reopening of the renovated flagship boutique in Greenbelt 4, Makati City, the well-attended event underscored the luxury brands’ zeal to cater to the affluent market. The moneyed lot, it seems, is no longer content with just buying designer; it also now has to be personalized and made to his/her exact specifications.

“Our idea of luxury is that you can have something made especially for you, in your color, in your style, something which not every brand is offering,” says Paul Cadman, chief executive of Salvatore Ferragamo Asia-Pacific.

“All our products are made in Italy. So you can select a product in your home city, we have it made in Italy for you, have it shipped back and you can wear it in the city where you bought it. It’s romantic, luxurious and most appreciated by our customers.”

For the Red Carpet service, a customer selects from four evening styles, picks a color from the 23 satin swatches (including bridal whites), have her feet measured, and the order is sent to Italy. It takes six weeks for delivery, with all adjustments done later in-store. The service is exclusively available in Manila only at the Greenbelt boutique.

The service is so named to pay homage to the brand’s heritage. Salvatore Ferragamo was an Italian cobbler who migrated to the United States as a young man. In California, he set up a made-to-order shoe shop that catered to the stars of 1920s Hollywood. He later returned to Italy and settled in Florence, where he set up shop once more to create shoes for some of the world’s most famous women, most notably movie stars like Marilyn Monroe, Audrey Hepburn, Greta Garbo, Sophia Loren—all fixtures of the red carpet. Ferragamo has been a shoemaker to the stars for over 80 years.

“We have a strong association with movie stars owing to our history,” Cadman notes. “Even today, celebrities like Jennifer Lopez, Sarah Jessica Parker, Angelina Jolie [wear Ferragamo on the red carpet]. Eventually, we decided our customers have many red-carpet events to go to as well, so we should give them the opportunity [to wear bespoke shoes like the celebrities]. It’s a very successful program.”

Red Carpet was first introduced in 2010 in key cities like Florence, Milan, Rome, Paris, New York and London. It began rolling out in Asia early this year.

“We have a similar ready-made line called Tremezzo, but we also have made-to-order,” he explains. “These are shoes made from one piece of leather and all hand-stitched. The process is the same. The gentleman comes in, his feet are measured, he chooses from a selection of leather swatches and styles. They’re made in Italy and shipped here. It can be personalized with his initials if required.”

The women’s bespoke shoes also offer free monogramming. There are four styles to choose from: Fragrance, an ankle-strap platform sandal with a ruched bow vamp and the iconic Vara plate; Dalila, a slingback platform sandal with crisscross vamp; Fiordaliso, a peep-toe platform pump; and Fioretta, a simple platform pump, easily the favorite of the younger set on Thursday night, including actress-models Solenn Heussaff and Sam Pinto.

Dalila, Fiordaliso and Fragrance all cost P36,500 for a made-to-order pair; Fioretta is P44,500. The consensus among the guests was that the prices were reasonable considering they’re made to order. Full payment is required upon ordering.

When Red Carpet was first introduced, it had six style choices. But Cadman says they decided to whittle it down to four and keep the two styles exclusively for celebrities. “Eventually we may release those styles. We may rotate. But four is sufficient for now.”

Surveying the guest turnout—a mix of the social, business and diplomatic sets—Cadman feels optimistic about the brand’s growth in the country, even hinting of the possibility of bringing back Ferragamo apparel in Manila.

“Of course, the number of people tonight isn’t the regular number of people who shops in the store. But as we develop as a company, we look to expand our categories… We really hope we can bring our ready-to-wear back because we had it here before,” Cadman says.

“But we like to focus on our core categories… Leather is our providence and men’s and women’s shoes are growing very fast. We launched our fine jewelry early this year and we’re looking to roll it out in all of Asia.”

While he sees global economies to be volatile in the coming year, Cadman says the company is looking into expansion and entering new markets. “We’re developing long-term. Our outlook is very positive.”