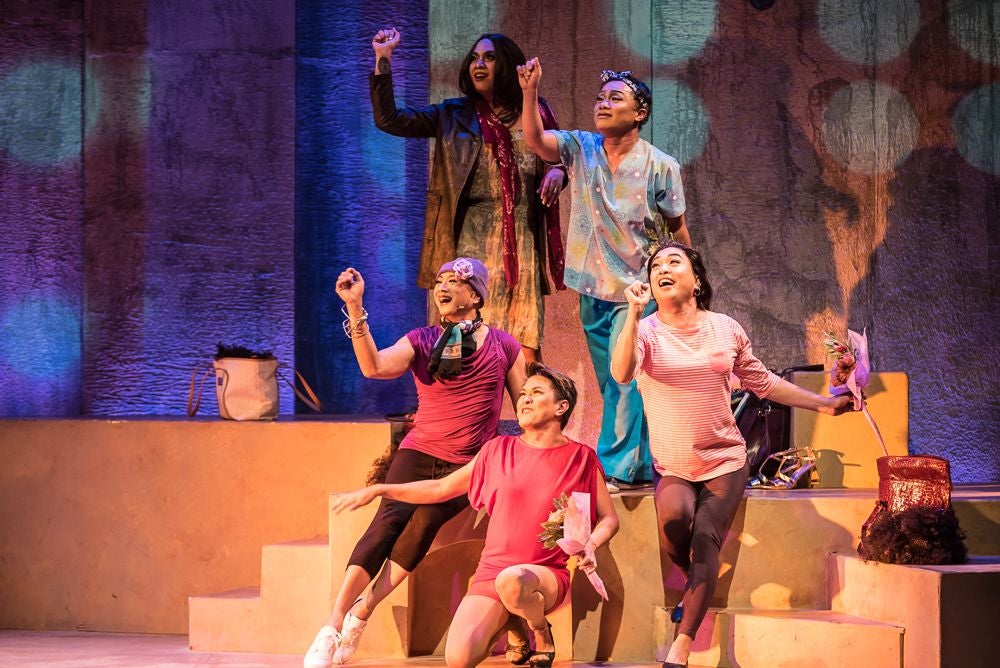 Owwa partners with Peta to bring back ‘Care Divas’

“The character I was playing, Kayla, was inspired by his life. As Cheska embraced me in tears, no words came out from both of us. I understood [what he felt]. And I will never forget that day. It was one of the most memorable acts of gratitude, of appreciation I’ve ever received from playing a role,” says Napoles in Filipino.

Napoles may have become more identified with Tolits, the funny male lead in “Rak of Aegis” (2014), but before that he played Kayla, one-fifth of a group of Filipino caregivers in Israel who moonlight as drag queen performers, in the original 2011 run of Peta’s hit musical “Care Divas.”

While a funny and colorful show, the musical, written by Liza Magtoto and directed by Maribel Legarda, also touches on bigger issues such as labor migration, alienation, discrimination, and all the hardships overseas Filipino workers experience in trying to provide a better life for their families back home.

Napoles, now a contract star of a major TV network, is back as the vivacious Kayla, alternating with Gio Gahol and Ricci Chan, in the restaging of “Care Divas” on June 24-July 30 at Peta Theater Center. Original cast member Phil Noble also makes a comeback, playing the moody Jonee, alternating with Thou Reyes. Dudz Teraña and Jason Barcial alternate as the delightful bimbo Thalia.

Vincent de Jesus, the composer-lyricist as well as musical director-arranger, plays Shai, the sardonic mother hen (alternating with Ron Alfonso), while Melvin Lee reprises the role of the soft-hearted Chelsea.

A January 2017 Inquirer report said that the number of OFWs in Israel has reached its highest figure in the last five years, citing data from the Philippine Overseas Labor Office in Tel Aviv. Workers in that country rose from 2,288 in 2015 to 2,850 in 2016, an increase of 24.56 percent.

The Overseas Workers Welfare Administration has partnered with Peta for the upcoming new run of “Care Divas” as a way of paying tribute to OFWs. On June 7, during the celebration of Filipino Migrants Day, also known as “Araw ng Pasasalamat,” Owwa gave away free “Care Divas” tickets to families of OFWs for the opening show on June 24.

“We expect at least 300 OFW families who will watch on the first day. The tickets were coursed through NCR (National Capital Region), which took charge of the distribution. We have other groups invited to watch for free. The others are Owwa and Dole (Department of Labor and Employment) employees,” says Josephine Tobia, head of Owwa’s advocacy and social marketing division, an attached agency of the Dole whose mandate is to take care of the welfare of OFWs and families left behind.

Before joining government, Tobia was a member of Peta from 1978 to 1988. She was, at various times, an actor, workshop instructor-facilitator and production designer. She started working in Owwa in 1992 as a welfare officer, and has since been assigned as overseas attaché in Singapore, Japan and Cyprus, before heading a department in Manila.

“I hope to invite more Owwa, Dole employees and their family members to watch it so they would know the lives of our OFWs, not only from what they read in the papers, or watch on television and films,” says Tobia.

Lee and De Jesus say that, since 2011, they have noted major changes in the kind of audiences watching “Care Divas.”

“In 2011, the audiences were mostly gays and their friends, or women who brought along their boyfriends. Now I see a lot of straight guys and even children. I have also experienced, on a regular day at the mall, being approached by strangers and being called Chelsea. Nakakatuwa, ’di ba?”

“One time there was this cute dad and his 5-year-old son who approached me after the show,” recalls De Jesus. “The father told his son to sit on my lap; I was still dressed as Shai. ‘I like you Ate Shai,’ the boy said to me. I was surprised and happy about it. I mean, hindi naman ako si Spongebob, ’di ba? But they saw the character, Shai, as a person and not as a flamboyant caricature. So that’s a major development.” —CONTRIBUTED