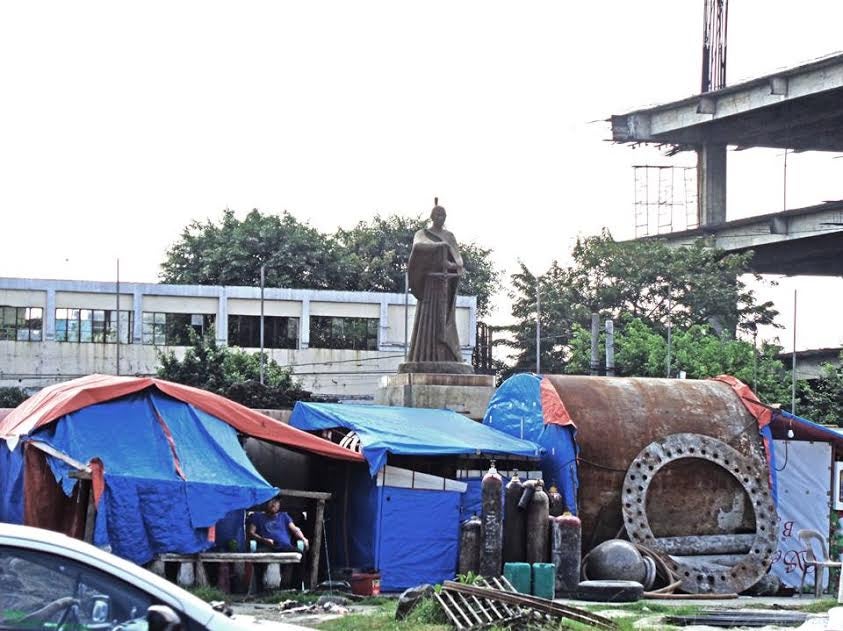 Plaza Dilao and the monument in March 2017 —PAULO ALCAZAREN

Plaza Dilao in Manila’s Paco district, the park where the monument of the Japanese Catholic warlord Justo Ukon Takayama stands, has been converted into a tambakan, or a dock for construction materials and heavy equipment, in connection with the Skyway Stage 3 project, incurring the ire of heritage advocates and even devout Catholics.

Takayama was beatified last Feb. 7 in Osaka by Pope Francis’ special representative, Cardinal Angelo Amato, prefect of the Vatican’s Congregation for the Causes of Saints.

Heritage Conservation Society chair Tats Manahan said “making the park a loading dock in the name of practicality sort of negates” the significance of the place, which “speaks well of our country’s gentility in our ability to forgive, perhaps because of our faith.”

A question of ‘delicadeza’

“It is really a question of refinement and delicadeza,” she added. “But then, if developers can just brazenly destroy buildings of historical and artistic significance, what’s stopping them from desecrating a space that commemorates an intangible historical memory?”

Lawyer Roger Paz of DMCI withheld comment on the issue.

Ludovico Badoy, executive director of the National Historical Commission of the Philippines (NHCP), said the site was not going to be affected by the Skyway project.

“The monument of Lord Ukon Takayama will stay in Plaza Dilao alongside the Skyway development project according to the technical personnel of our Historic Preservation Division,” he said.

It was NHCP that gave the go signal to the construction of the multistory Torre de Manila, even if it turned out to be a “photobomber” to the Rizal Monument and was surrounded by historic places with NHCP markers.

“The monument and the NHCP marker are safely protected until the project is finished,” said Badoy.

The immediate area of the monument and the historical marker has been cordoned off using GI sheets. The monument itself has been covered by what seems to be plastic sheets.

It is not clear though whether the NHCP gave the go signal for the construction materials to be placed on site. Badoy said he would have this investigated.

But the park is a memorial not only to Takayama, but also to 25 Japanese volunteers of the Philippine Revolution.

Previously, the area had been assigned by Spanish authorities for Japanese refugees, such as Takayama.

In 1943, the Philippine Historical Markers Committee, forerunner of NHCP, proposed the site to memorialize the Japanese volunteers of the Revolution.

Takayama was born in 1552. He was exiled together with over 100 companions to the Philippines in 1614 after refusing to renounce his Christian faith—which had been outlawed by the shogunate.

His life was marked with heroic virtues, and protecting Japanese Christians against persecution, according to the formal cause of his beatification.

Fifteen years after his death, the Archdiocese of Manila petitioned in 1630 for his declaration as a saint.—CONTRIBUTED