Why even the millennials must know the imprint of Luis Ma. Araneta | Lifestyle.INQ ❮ ❯ 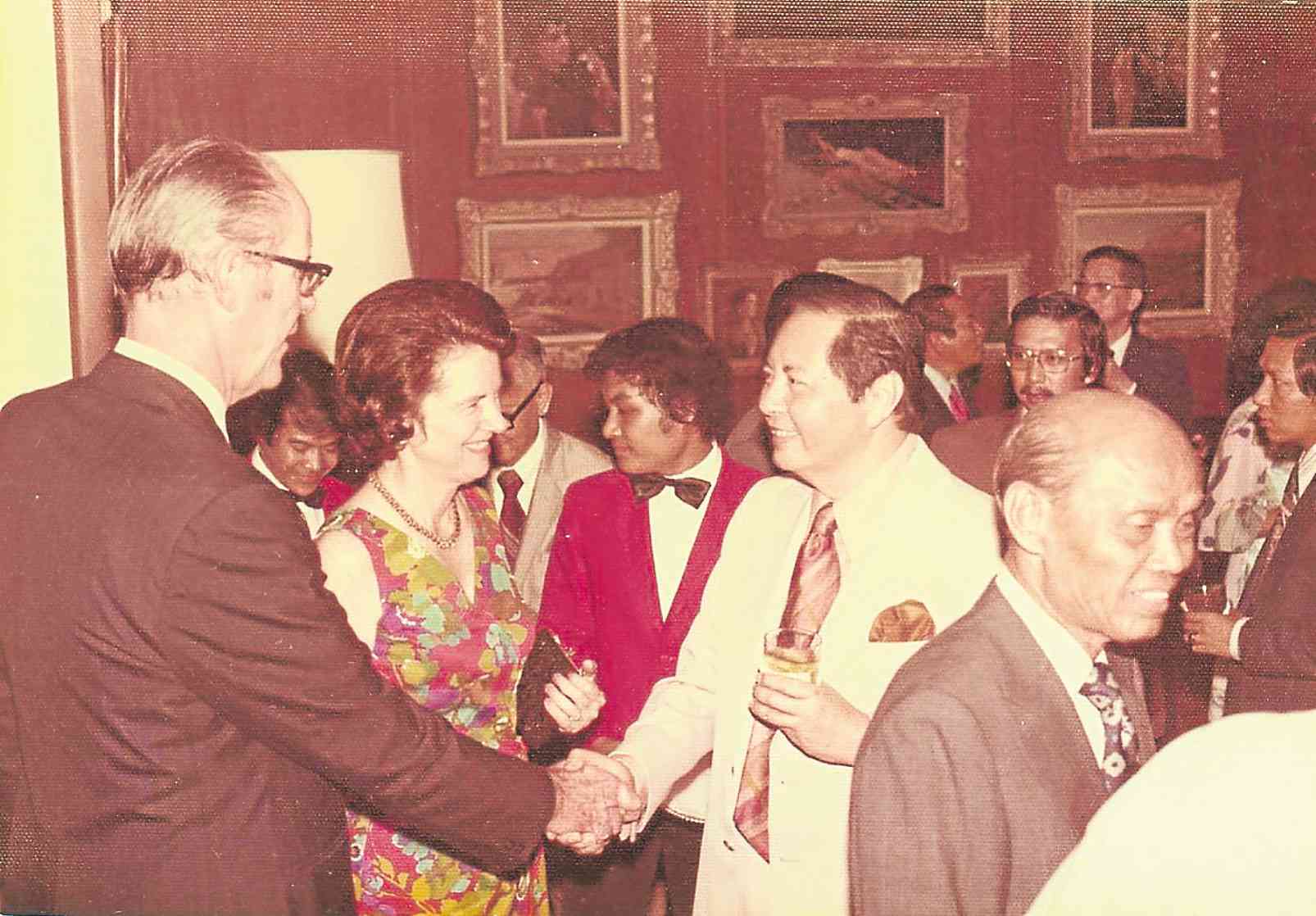 In the mid-20th century,men wore suits and ties at his parties. Luis Ma. Araneta is in his trademark light suit with pocket square.

Why even the millennials must know the imprint of Luis Ma. Araneta

In Philippine elite society and its history, there was no one quite like Luis Ma. Araneta.

They were famous for theatrical parties, nonchalant elegance, aesthetic snobbery and continuous acquisition of art and antiques.

Araneta was an architect, decorator, businessman and art patron.

As part of the yearlong celebration of the Luis Ma. Araneta birth centennial, there will be a lecture titled “Crafting Identities” on June 24, 3 p.m., at W17, La Fuerza Compound, Chino Roces Ave., Makati.

As architect, Don Luis—as Araneta was called by Manila society—was progressive. His daughter Elvira noted, for instance, how the Times Theater on Quezon Boulevard, Quiapo, was the first cinema to install neon backlighting as a decorative element on the facade and the equipment to clean the air inside.

In the halcyon days of Escolta, Araneta designed Botica Boie, then the watering hole of Manila’s swell set and a popular place for people-watching. He also designed the Araneta and Tuason Building, which was the first to use the brise soleil or sun baffles as architectural embellishment.

During the Macapagal presidency, Araneta expanded the Heroes’ Hall and the riverfront balcony azotea of Malacañang and renovated its Social Hall into a colonnade.

His residential clients were kindred spirits such as Dr. Constantino and Elvira Manahan, and J. Antonio Araneta.

The home of his sister, Teresa Araneta-Albert, in Sta. Mesa, Quezon City, was likened to the fine decor of a Parisian apartment. Her dressing room was covered with genuine leopard skin.

In Forbes Park, Araneta’s home set the template for high-style. “He showed Manila’s upper crust that incorporating ecclesiastical antiques in the home was chic, not scary or nunnish,” said Gonzalez. “Santo (religious icons) were interspersed with classical paintings of Filipino masters, antique and modern furniture. In the mid-20th century, these antiques were placed side by side with Filipino furniture.”

Araneta adopted the latest technology. Elvira recalled that he built the first wall oven in the country to integrate the appliance in the kitchen design. He also discovered the capos shell and used it to embellish the Philippine pavilions in international world fairs.

“When we were growing up, he’d have all these gadgets in the house like a portable, personal spa—which looked more like a torture chamber to me—and a personal massage furniture which was new then,” recalled Elvira.

Araneta would always be remembered for repurposing antiques and using them to lend history to a house.

One of Araneta’s hallmark styles was to recycle parts of the carroza (silver religious float) into décor. A large sanctuary lamp from the Vigan Cathedral was repurposed into a statement piece, perfect for the lanai, while other carroza parts were turned into a champagne cooler or other home accessories.

“Some wooden chandeliers were built with parts of the carroza. He designed the main body and used the arms for viriñas,” said painter-designer Adolfo Liwanag.

Liwanag met Araneta when he was a student and member of the world-renowned Bayanihan Dance Company and Araneta was one of its pioneer board members. Araneta worked with Bayanihan’s costume director Isabel Santos for 41 years. The folk dancers would either perform in or model his costume collection in Araneta’s Filipiniana-theme parties.

Among such well-attended events was one in honor of foreign dignitaries such as then Princess Beatrix of the Netherlands.

Liwanag, a Fine Arts graduate of the University of Santo Tomas, was asked by Araneta, then president of the luxury department store H.E. Heacock, to become its display director. Liwanag went on to assist Araneta in interior design projects.

Araneta’s home was a stylish repository of his art and antique collections. His foreign trips exposed him to the works of great architects typically characterized by understated entrances that would reveal extraordinary interiors—a sense of arrival, the experience was described. The curved driveway led to the entrance.

“There was a 14.8-meter walkway made of piedra china over a koi pond, lined with fountain sprinklers and fountains,” recalled Liwanag.

Elvira said her father was a perfectionist: “That walkway went through several permutations before he was finally satisfied with the placement of the stones.”

Guests were greeted in style in the vestibule, with a six-foot-high mirror, ornately framed by parts of the carroza.

The Araneta house was built in 1959, when the split-level design or intersecting tiered floors was popular in America for its judicious use of space. The staircase, lined with customized brass balusters, led to the living room on the second floor.

At the top of the stairs, which displayed his grandfather’s portrait by Miguel Zaragoza, Araneta, dressed in either a suit with a pocket square or a costume, welcomed the guests.

Liwanag remembered that the living room was painted in off-white to bring out the colors of the Luna and Hidalgo paintings. The accent wall was built with four-ft-wide narra planks. The classical paintings complemented the rounded profiles of the European furniture.

Elvira explained that Araneta worked with Juan Culala Flores, who was said to have led a secret life as New People’s Army commander. Araneta did the furniture design which Flores and his carpenters executed. Today Flores is regarded as the progenitor of Pampanga sculpture and woodcarving or the famous Betis style.

The furniture’s lavishly sinuous shapes blended with the wing chairs and long sofa.

Flores also remade the carrozas into a coffee table. “The carroza had a round platform that was carved and gilded,” said Liwanag.

The Araneta dining room, which overlooked the garden, had a 14-seat table. The Ming and Quing blue-and-white porcelain collection adorned the wall sconces.

In some parties, the long table was removed to give way to a large round table with a hollow center—where the fountain would be.

The lower level, the gallery, displayed Araneta’s ecclesiastical art, bas reliefs, vestments and religious icons that were flanked by salvaged church columns or were set on an altar table.

Liwanag likened Araneta’s bedroom to Napoleon’s tented bedchamber. His king-size bed was held up by brass legs he designed himself. It blended with rare Campaign furniture—vintage foldable furniture with simple but elegant hardware. Fragments of santo and lamps were mounted on wooden brackets.

The circular guest powder room was lined with a mosaic mirror. “He had the pieces cut inch by inch. Nobody ever did that before,” said Liwanag.

The parties embodied high style. For instance, to honor his house guest, Chilean painter Claudio Bravo—the toast of Manila’s high society in the ’60s—Araneta held a fantasy party around the theme “Dance on the Magic Carpet.” Guests were dressed in pantaloons and harem pants and walked on Persian carpets.

In another party, following the theme “Lovers of the Great Century,” Liwanag came as Shah Jahan, the Mughal emperor who built the famous mausoleum Taj Mahal. His wife came as Mumtaz Mahal.

In 1984, with daughters Patricia and Elvira, Araneta flew for a medical checkup at Stanford Medical Center in California. His close friends, Dr. Constantino and Elvira Manahan, came along.

However, Araneta suffered a stroke and was rushed to Mount Sinai Medical Center in San Francisco.

His son, Gregorio, flew from Manila to be with him.

Araneta died on Easter Sunday, leaving the country a heritage of cultural treasures and his imprint of fine taste, which even the millennials must know about and be proud of. —CONTRIBUTED