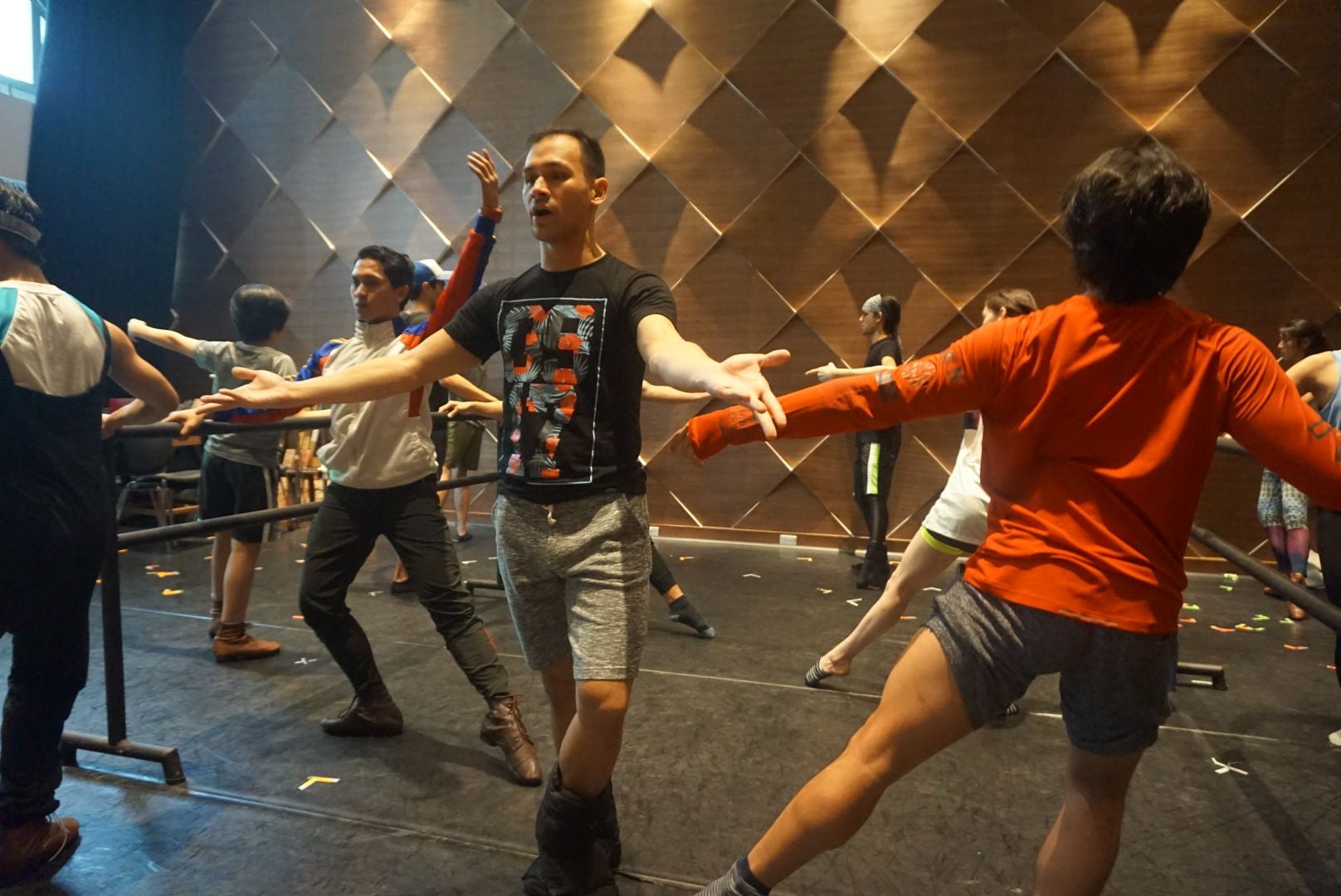 In 9 Works Theatrical’s upcoming staging of “Newsies the Musical,” only the book, lyrics and music must be followed. All other aspects of the show (direction, costumes, set, lighting, etc.) must be created from scratch.

“We can’t do what they did on Broadway,” says the show’s choreographer Patrick John “PJ” Rebullida. “We have to create and are required to have our own vision.”

The musical is about boys who sell newspapers on the streets of 1899 New York City and their strike to challenge the low wages paid to them by publishers. With music by Alan Menken (“The Little Mermaid,” “Beauty and the Beast”), lyrics by Jack Feldman and book by Harvey Fierstein (“La Cage aux Folles,” “Kinky Boots”), the musical is based on the 1992 Disney movie of the same title that starred a teenage Christian Bale.

The New York Times described the Broadway production’s choreography as “coming at us in full-speed-ahead phalanxes … [with] back flips, cartwheels, somersaults and kick lines galore, not to mention enough pirouettes to fill a whole season of ‘Swan Lake.’”

Rebullida has been working with director Robbie Guevara and the rest of the artistic team to build a differently choreographed show—but with the same level of energy and intent.

“We began by discussing who and where the newsies are in the whole scheme of things. Where do they come from? How do they live? What are all the aspects that led to a successful strike?

“These kids are survivors, they are tough. They made the headlines by coming together and fighting a system that did not value them.”

The performers who’ve been cast for the show—a 21-member cast of “newsies,” among them Gian Magdangal, Jef Flores and Ariel Reonal—also have to be tough. They have to undergo and pass a six-week boot camp Rebullida put together that includes ballet, jazz, hip-hop and gymnastics.

“I never meant to be a choreographer or an artist,” says Rebullida. He directed and choreographed small and amateur shows when he was still in school, “but it was all just for fun and for extracurricular events.”

He’d geared himself for the life in the corporate world and worked for an IT firm in Ortigas. But he promptly quit on his second day. “I couldn’t take being cooped up in the office. I went to Megamall to watch a movie and soul-search. There I saw a Trumpets Playshop poster for Adult Musical Theater.”

Choreographer James Laforteza spotted him during the workshop and gave him a scholarship to take up jazz, ballet and modern dance at Steps Dance Studio.

“I was old at 22 to even start, but with hard work and inspiring guidance, I became a full-fledged dancer,” says Rebullida.

He started choreographing while he was in Germany and continued to do so upon returning to Manila, working with groups such as Red Turnip and Stages.

He received the Philstage Gawad Buhay for outstanding choreography in a musical for 9 Works’ “American Idiot” last year. He had competed against himself with another nomination for “A Christmas Carol.”

He admits that the first few weeks of choreographing “Newsies” were difficult. “All the signature steps from the Broadway staging are off-limits. I had to provide my own solutions to the demands of the story.”

But “the more we worked, the clearer the path became. The dancing must be driven by intent. What do we want to push forward?”

In addition to ballet and jazz, Rebullida is including tap and boxing moves into the dance vocabulary. Though he says even he doesn’t know how it will turn out exactly just yet.

“We’re still in the creative process. We might throw everything out after a week and go for something completely different.

“We’re all excited. We want to put on a great show. Despite all the pressure, I’m taking my cue from the newsies: ‘We will carry the banner, persist and seize the day!’”