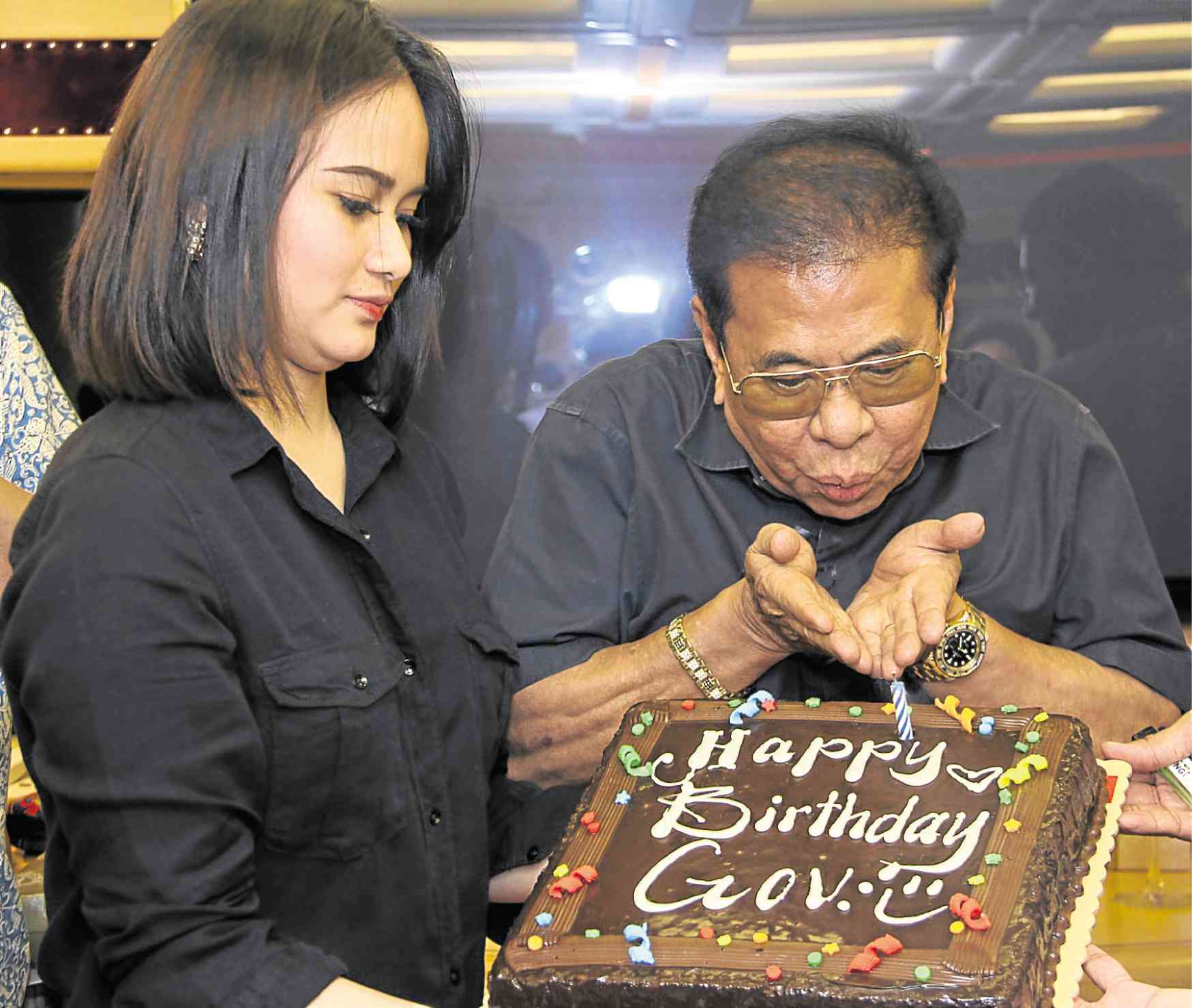 The birthday boy makes his wish and blows his candle.

Your mantra for the week: “A shower of blessings awaits me everyday.”

In this column last week, I discussed the first five of 10 biblical quotations that are not just scriptural but also philosophical and psychological truths.

The depth of your belief is where your faith is. In IAMISM, our deepest beliefs are found in the subconscious mind, so even if we consciously think we will succeed but subconsciously feel we are failures, it is done unto us. It behooves us to constantly remember the other biblical quotation that further explains this one: “For as he thinketh in his heart, so is he.”

Humans have their own respective karma to work out. Keep in mind that each one enters a lifetime with a set of lessons to learn and a batch of challenges to resolve. It’s a reminder that we should not compare ourselves to others because there’s “KKK”—kanya-kanyang karma!

This is probably the most controversial biblical quote of this batch. It proves the Truth that the God we speak of has no judgment, and that the Lord in this quotation is another word for Law, the Law of Sowing and Reaping likened to “Revenge is mine, saith the Lord” and the “I AM THAT I AM,” which is the name of God, can make peace and create evil through any of its creations like you and me.

In IAMISM, you are the king in the kingdom of your mind, and whatever you have decreed, it is done unto you because the God I speak of is a God that says yes to all, whether negative or positive, because It judges not.

This particular quotation only proves that Jesus of Nazareth never claimed he was The God, and that he recognized that the God he spoke of was within each man and, therefore, he had humility enough to proclaim that others are capable of greater works than he had done.

If you find yourself going through challenges in life, reflect on these biblical quotations with the IAMIST interpretations. You will understand why I claim that IAMISM is a path to happiness.

Narvacan, Ilocos Sur councilor Chavit “Mr. Universe” Singson celebrated a birthday last week in his fabulous yacht so appropriately called Happy Life. It is one of those boats that have to be docked at the very end of the Manila Yacht Club because of its enormity. It can take as many as 200 people if one were to use it for a party.

The only hitch for guests is the long walk they have to take from the yacht club proper to where Happy Life awaits its passengers especially on a drizzly late afternoon. It can be likened to walking on a shaky ramp toward the middle of the bay. But one forgets all that as we gain entrance to the luxury of Happy Life.

That evening, I had the pleasure of meeting members of the diplomatic corps who are new in the country, like Canadian Ambassador John Holmes and his author wife Carol Bujeau who has just finished writing a book with a most intriguing title, “Sex for Three and Other Tales.” On that title alone, it should land on the bestseller list.

There was the Taurean Ambassador of Morocco Mohamed Rida El Fassi who has three Scorpios in his life: his charming wife Monia, his daughter, and son. They are starting their diplomatic stint in the Philippines after seven years in Pakistan.

Vietnamese Ambassador Ly Quoc Tuan and his wife Vu Tam Dan are here after several years in Washington DC. I asked how they were treated in America, when someone countered, “I am sure they were loved because the Vietnamese are more pro-American than Filipinos.”

I was introduced to Belgian Ambassador Roland van Remoortele, whose wife, the friendly Singaporean Sylvia, I had met a few months earlier at a baptismal affair. Unfortunately, many relationships are cut short when ambassadors are reassigned to another country.

No offense, but their wives have more interesting stories to tell, which is understandable since they don’t have to be as conciliatory.

The Greek Ambassador Nikolaos Kaymenakis came by himself. Someone whispered that his embassy had just turned down 10 members of a prominent Makati family who could have spent a big bundle of euros which the Greeks really need to grease their financial engine. The group instead proceeded to Germany.

As Happy Life was cruising along the bay, we were on the third deck marveling at the glorious Manila sunset, accompanied by a rainbow—truly an awesome experience and a good omen for Manong Chavit.

Dinner was set for 20 people but, like many gatherings in this country, more people arrived than those on the guest list. “So similar to a barangay caucus,” someone commented.

I must say that Jazz Carreon has come up in the world of playing host with the support she gave Manong that evening. Needless to say, we were serenaded the whole evening by a quintet with two female singers who sang familiar melodies that made it easier to eat dinner while the boat was swaying gently with the rhythm of the waves.

It was such a happy evening for Manong Chavit, who told me last year, while in the middle of preparations for holding the 65th Miss Universe pageant in Manila: “I am now at the point of my life when I want to give back. I have been greatly blessed in my life in many ways”—from his supportive family to his successful businesses in transportation, Partas and Platinum Skies, not to mention agriculture and energy.

To those who have, more shall be given. Here’s wishing you, Manong, many more years of a Happy Life!

In the ’70s and ’80s before the Edsa revolution, today was the date when all Blue Ladies and their Blue Boys fell on their knees, even if it was not Christmas, out of reverence to Imelda Marcos—The Beautiful One (TBO).

Around four years ago to this day, I sat beside TBO for a few hours and got a chance to ask how she felt about those who double-crossed her and never returned what was given to them for safekeeping.

She calmly replied: “I have already forgiven them. At least, alam nilang lahat ako ang nagpayaman sa kanila (they all know in their hearts that I made them rich).”

And speaking of rich, last year, also around this time, I wrote about de buena familia which refers to the old rich (OR), and the binuenas na familia, the new rich (NR) who have become wealthy through industry and management talents. I inadvertently forgot that there should have been a third category under the acronym CR, the crony rich—and they know who they are, according to The Beautiful One.

E-mail the columnist at [email protected] Listen to his “Positive Session” radio program on DWIZ 882 AM every Saturday, 9-10 p.m.