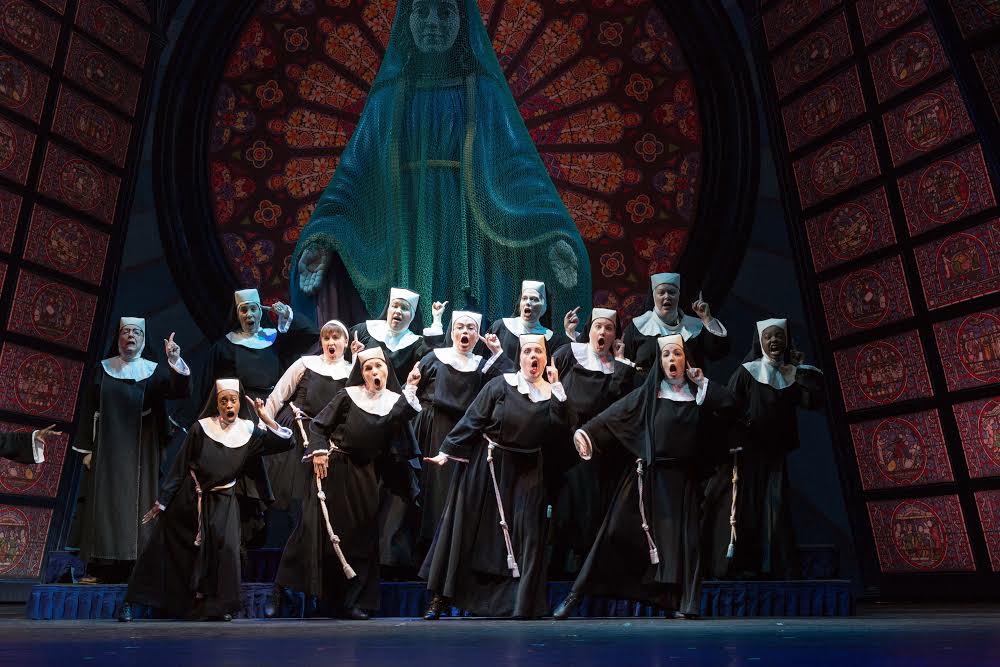 “Sister Act,” brought to Manila by Ovation Productions, has remaining performances today and tomorrow at The Theatre at Solaire. OVATION PRODUCTIONS

‘Sister Act’–where the convent is now a sorority house

Midway through the second act of “Sister Act,” its protagonist, down-on-her-luck club singer Deloris Van Cartier, sings: “I’ll have my sisters with me still/I’ll have my sisters, always will,” and one can’t help wondering whether or not she’s still talking about the same sisters of the immaculate frock and immaculate voice bopping all around her.

Deloris, one should recall, is on witness protection after walking in on her gangster boyfriend shooting a henchman dead. Now she’s hiding out in a convent, in the process resurrecting the once-hopeless choir while clashing with the traditional Mother Superior.

When Deloris breaks into the title song, however, it’s the ultimate cue for the audience to finally accept the fact that “Sister Act” the movie and the musical are only half-sisters at most.

Though it basically follows the movie’s plot, this stage version has lost much of the whimsy, that slightly out-of-your-mind quality, that made the iconic 1992 film starring Whoopi Goldberg such a trip. The nuns, for instance, no longer blackmail a helicopter pilot to fly them to Vegas, where they’d scurry through the slot machines to save Deloris.

In place of flat-out zaniness, we now have a “Sister Act” for the girl power generation, if your sisters were chaste and ardently Catholic. The nuns as Deloris’ sorority sisses, anyone?

There is now also a dispensable love story on the side, plus one too many song-and-dance numbers and a glittery bear hug at the end to pummel the message that, hey, sometimes the people we least want to accept end up changing us for the better. Who knew?

This stage version also has a totally original score (music by Alan Menken, lyrics by Glenn Slater) and though some of the numbers do raise the rafters during the show, none of the songs really cling to your brain the way, say, “I Will Follow Him” unfailingly follows you around.

The production at The Theatre at Solaire, an international tour that ends its two-week run tomorrow (July 9), is a model of efficiency. It shares the direction, choreography and almost the same design team with the original Broadway production.

Like a well-orchestrated mass, this touring production moves fluidly, singing and dancing and transitioning from scene to scene without a hitch. So fluidly, in fact, that it all feels perfunctory.

Dené Hill as Deloris, for example, is all surefire spunk and feisty confidence—a one-note performance that’s as predictable as the plot. When she leads the nuns in prayer for the first time, she’s like an overconfident girl scout cluelessly bungling an oath.

And she never fully sheds that skin of overflowing enthusiasm to reveal a more vulnerable, conflicted interior—the kind that made Goldberg’s portrayal worth rooting for.

Hill and Rebecca Mason-Wygal (as Mother Superior) do manage to evince the bullhead-against-bullhead dynamic that Goldberg and Dame Maggie Smith did so well in the movie. But they never feel like equals—more like a school principal contending with her childish ward, which makes their eventual reconciliation less satisfying.

Alas, the rest of this “Sister Act” settles for the unsurprising. Thus, while performed with a surplus of smiles, it can get monotonous pretty quick, like a sorority party running dry on booze and crazy.

“Sister Act” runs until July 9 at The Theatre at Solaire. Visit ticketworld.com.ph.