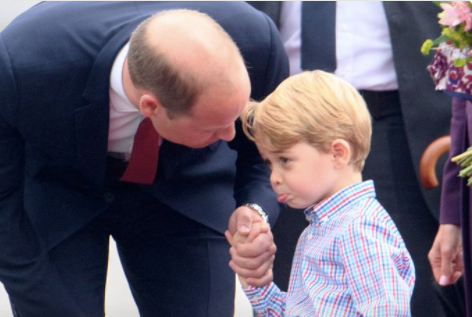 The family is currently visiting Poland for an official tour of the country:

According to an official statement, the royal pair embarked on the trip to “acknowledge the complex 20th century history of each country.”

They visited monuments such as a former Nazi concentration camp, the Gdansk Shakespeare Theatre and the Warsaw Rising Museum.

However, young Prince George, like any toddler, wasn’t keen on the trip, probably knowing that there would be all these grown-up stuff:

Prince George was a little hesitant about leaving the plane in #Warsaw pic.twitter.com/tWyiskJ7ub

While baby sister Charlotte looked relaxed in her mom’s arms, Prince George looked uncertain with his dad as they walked through the red carpet welcome:

The family receives a warm welcome as they touch down for #RoyalVisitPoland 🇵🇱 pic.twitter.com/qwQsTfJkJL

With quite the mature posture (see hand in pocket), the toddler pouted as they walked on the runway:

Poland, being an ever gracious host, tried to comfort the young royal:

Dear Prince George, there is no need to worry. #Poland is Great just as Britain is! 🇵🇱🇬🇧

Probably noting that their children would be overwhelmed by the crowds, the Duke and Duchess of Cambridge went on their own when facing throngs of Polish supporters:

During his great-grandmother Queen Elizabeth II’s birthday, the tot didn’t hide that he was less than amused by the hours-long proceedings, earning the title “the most relatable royal.” JB