2 books about ‘Harry Potter’ world to come out this October | Lifestyle.INQ ❮ ❯ 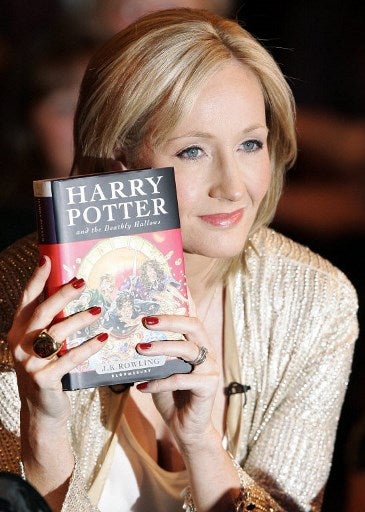 This file photo taken on July 20, 2007 shows British author J.K. Rowling presenting her novel "Harry Potter and the Deathly Hallows" which went on sale at midnight 20 July 2007 at the National History museum in London. The creator of a wizarding empire which has dazzled the world, J. K. Rowling struggled through hardship to become an unrivalled children's author with a global voice. Now 20 years since "Harry Potter and the Philosopher's Stone" was first published, inspiring a generation of young readers -- and their parents -- it is hard to imagine Rowling before the seven Harry Potter books. AFP FILE PHOTO

2 books about ‘Harry Potter’ world to come out this October

The “Harry Potter” wizarding universe is as vast as they come and could become subject to multiple spin-offs for years to come.

Much to the delight of “Potterheads” all over, Bloomsbury Publishing announced two new “Harry Potter” books slated for release this October.

The former, as per The Business Insider, will feature the wide array of magical subjects that pupils study at the Hogwarts School of Witchcraft and Wizardry.

The latter, meanwhile, will divulge the mystique of the Potter world, particularly the mythical creatures, enticing spells and a rundown of famed wizards and witches.

Although it will not be connected to the original stories unlike “Harry Potter & The Cursed Child,” both titles are expected to delve further into the magical fantasy  world created by J.K. Rowling.

As of this writing, there’s still no word as to how much the books will retail to the public.  Khristian Ibarrola /ra