Rony Fortich, back from HK Disneyland, takes us to the ‘Best Seat’ in Manila | Inquirer Lifestyle ❮ ❯ Rony Fortich, back from HK Disneyland, takes us to the ‘Best Seat’ in Manila 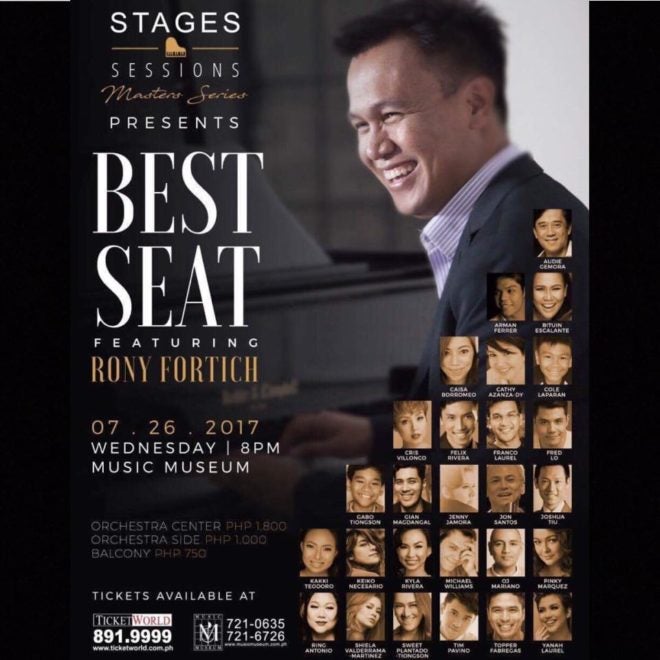 Being a musical director in the happiest place on earth is a dream job for many people. For 12 years, Rony Fortich lived that life, as the top music guy of Hong Kong Disneyland.

“I learned a lot about the magical combination of storytelling and music. Everywhere you look in Hong Kong Disneyland, a story is being told and there is always music to help tell that story. Over the last 12 years, I got to explore different ways of using music to celebrate Christmas, tell a Halloween story, invite people to enjoy summer, to express love, joy, fear. That’s something I want to continue to do, find more ways of telling a story through music,” he says.

But when he turned 40 this year, Fortich decided to move on.

“After 12 years with Hong Kong Disneyland, I felt this need to explore what else I could do musically. I’ve learned so much from so many amazingly talented musical directors and directors; it was time for me to take all that and see how else I could fly with it,” he says.

Back for good in Manila, he is busy rehearsing for his homecoming concert, “Best Seat,” on July 26, Wednesday, at the Music Museum, as part of the Stages Sessions Masters Series.

“My best friend is performing, my nephew, my godchild. I’ll be surrounded by friends and family. I’m very excited,” says Fortich.

Family is actually a major reason why he’s back for good. “To be able to spend more time with my family, my partner and kids as well,” he says.

Last year, Fortich also received the Ten Outstanding Young Men Award, and it touched him deeply. “I want to give back to the country by making more music for the Philippines in whatever way I can.”

The earlier iteration of “Best Seat” was Fortich’s “Best Seat in the House” concert, held on July 26, 2014 at Teatrino in Greenhills and also produced by Stages. “It was theater friends being amazing on stage, singing pieces we chose together to best show them off,” he recalls.

On October 22, 2015, he starred in “Best Seat in the House 2” at the Cultural Center of the Philippines, as part of its Triple Threats series featuring young Filipino composers. “Naturally, what we did were all my compositions.”

The idea for the “Best Seat” concerts came up when Fortich turned 30, when he started hosting an annual birthday jam with friends.

“We would gather and sing songs around a piano—something I missed living abroad. As years went by, more theater people would come and would so generously jam a tune with me and for my friends. Then one year, Audie suggested making it a full concert. So we came up with ‘Best Seat in the House’ in 2014, where I gathered my theater friends to perform a song while I would tell stories about them—stories I had gathered from being at the piano bench, literally the best seat in the house,” he says.

For the Music Museum concert, Fortich says they are back to theater pieces “but told in a new, exciting way.”

“The theme for the evening is stepping outside of your comfort zone, as I have by leaving a job that I’ve had for the last 12 years. So everyone will be singing songs from shows or roles that they wouldn’t normally be cast for. It’s scary and fun for everybody, I think … On a personal note, it’s both my farewell to Disney and my ‘welcome back to Manila’ show.” —CONTRIBUTED
“Best Seat” is on July 26 at the Music Museum. Call 8919999, 7210635 or 7216726.