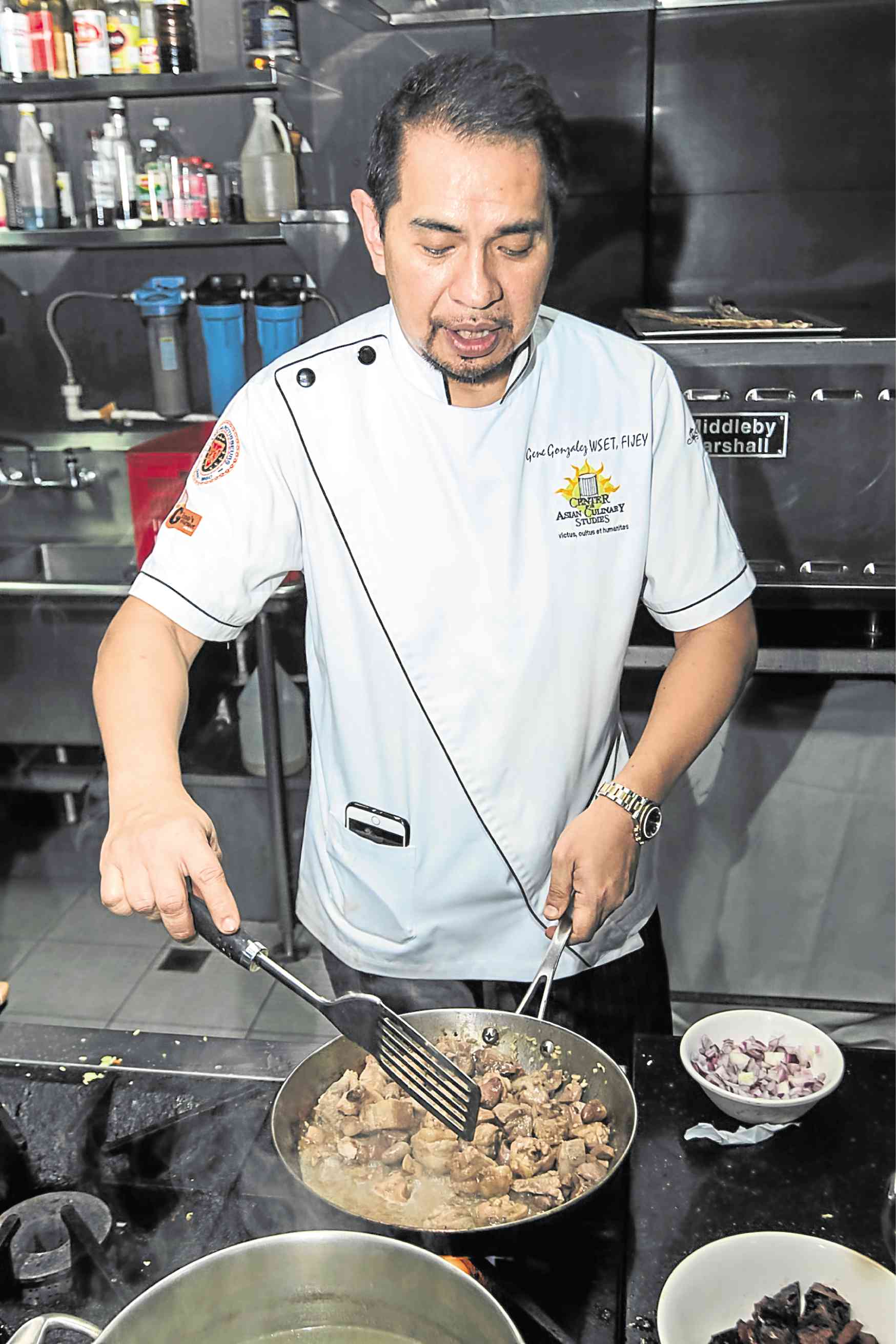 In collaboration with San Miguel Pure Foods Culinary Center (SMPFCC), Gonzalez and the SMPFCC chefs exhibited ways of preparing Pinoy food done in the Mountain Province, from cooking over an open flame using hay or wood shavings, to steaming food in bamboo.

“One must know where one’s food or cooking comes from,” Gonzalez said. “If we are to expand Filipino food overseas, we have to know how it evolved and how it was done in the past.

“It’s important for the younger generation of chefs to understand these things,” he added. “Before you create a dish that has Filipino influences, you have to know its history. It’s not enough that you put garlic and vinegar in a dish and it’s already called adobo.”

Gonzalez demonstrated one traditional method of cooking using an empty oil can.

In the absence of a stove, empty cans were used by the Hukbalahap, a postwar communist guerrilla movement formed by the peasant farmers of Central Luzon.

Gonzalez’s recipe, the Oil Can Chicken, called for a whole chicken rubbed in garlic and rosemary. (In the mountains, natives used only garlic and lemongrass). The chicken was then cooked in the empty can by covering the can with hay (dayami) and then lighting it up.

The extreme heat inside and outside the can acted like an oven, allowing the food to cook fast, resulting in a juicy, flavorful chicken dish.

Victoria said the bamboo was soaked in a bucket of water to prevent it from burning. Once the chicken was placed inside, the bamboo was wrapped with banana leaves and aluminum foil and then charcoal-grilled.

Gonzalez, who grew up in Sulipan, a small barangay in the town of Apalit, Pampanga, also shared some of his favorite Kapampangan recipes, including Adobo del Diablo. The Kapampangan adobo uses only garlic, pepper, fish sauce (patis) and vinegar.

It has a deep-bronze color, produced by constant simmering and deglazing of the pan with stock when a crust is formed. The tasty caramelized stock is brought back to the meats to give them that deep, reddish-brown hue.

“I like my adobo the way we do it in my town,” Gonzalez said. “No soy sauce—it’s a crime in the Kapampangan household.”

Adobo del Diablo offered a rich but sharp, garlicky flavor that blended with the variety of meats in the dish—chicken heart, blood and giblets, beef liver and pork kidney.

Gonzalez also prepared Bringhe, which he had demonstrated at the recent Madrid Fusion Manila. Similar to the Paella, Bringhe originated in Pampanga and is made with glutinous rice cooked in coconut milk and turmeric, and tossed with pork and chicken.

Aside from Bringhe, Gonzalez also showed how to make a proper binalot using banana leaves, which helps preserve the quality of food. He heated the banana leaf over an open fire and rubbed it with rock salt. The salt added flavor to the leaf without compromising the taste of the dish.
The banana leaf was then stuffed with steamed rice topped with adobo, tinapa, salted eggs, tomatoes and green mangoes.

“Buro is not unique to Kapampangan,” Gonzalez said. “It is a method of preserving protein with rice. It is practiced all over by Southeast Asian mountain tribes in Taiwan, Korea, Japan, Malaysia. They just bear different names and terms.”

For buro, aside from pork, one can also use any freshwater fish such as tilapia, dalag or hito.

Gonzalez and SMPFC chefs said that going back to basics and classic cooking should be a top priority for aspiring chefs.

“It is important to know and understand the origin of Filipino food,” SMPFC culinary services manager Llena Tan-Arcenas said.

“The value of food history and old cooking techniques are slowly vanishing due to technology and modernization. So, with this kind of activity, we relive who and what we are. It’s always fun to go back to grassroots cooking.”

E-mail the author at vbaga@inquirer.com.ph