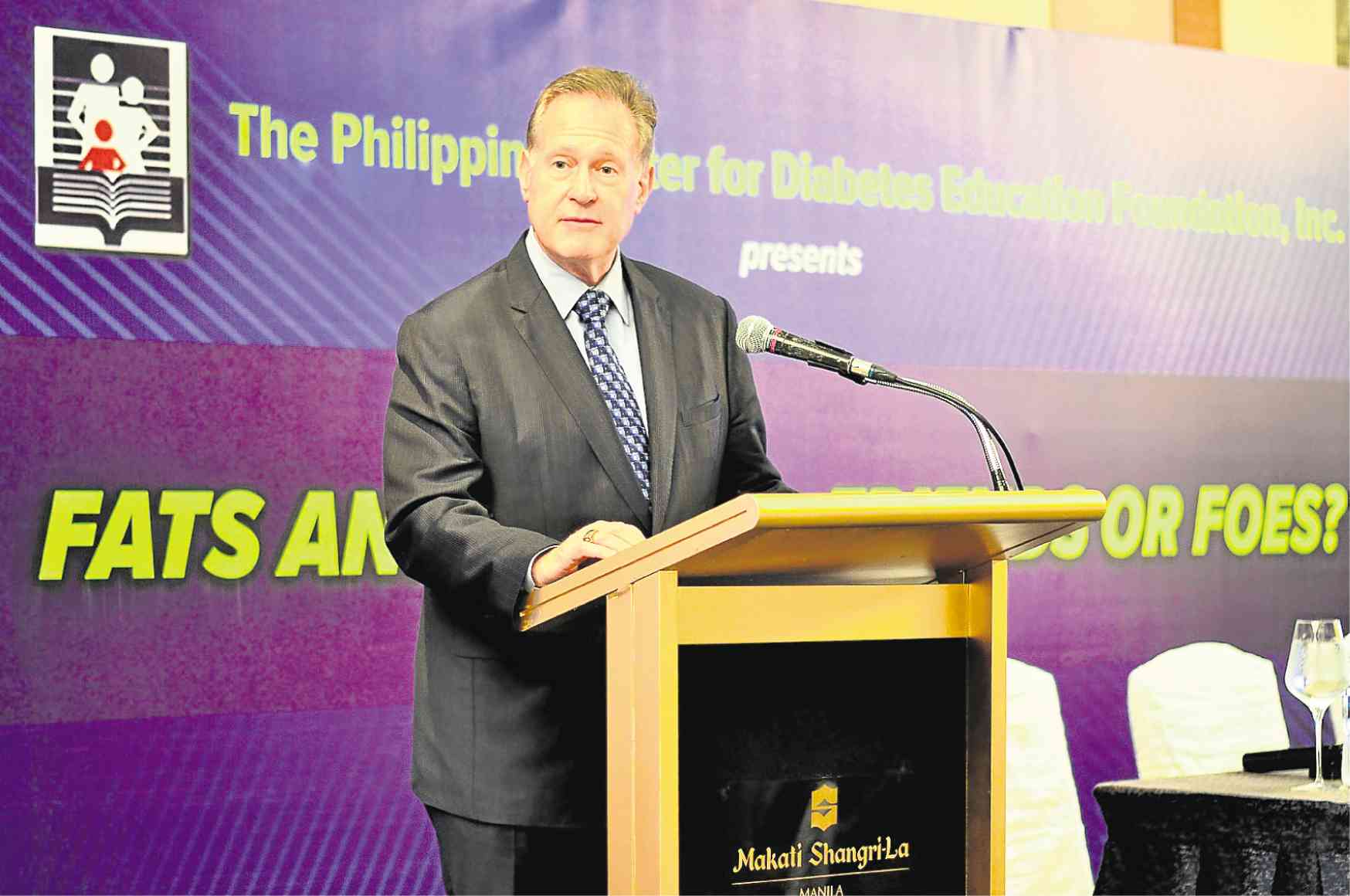 The root of the world’s health problems may be summed up in one word: sugar.

“It’s not about obesity, it’s about diabetes … Our sugar consumption is killing us, and you can’t fix this until you fix the food,” said Dr. Robert H. Lustig, world-renowned endocrinologist and author of the book “Fat Chance: The Hidden Truth About Sugar, Obesity, and Disease.”

Lustig was in the country as a guest speaker for the event mounted by the Philippine Center for Diabetes Education Foundation Inc. and  United Laboratories, with a theme, “Fats and Sugar: Friends or Foes?”

For decades, Lustig said, people had been made to believe fat was the bad guy. But not all fats were made equal. Some saturated fats elevated bad cholesterol, others had no effect and others actually increased good cholesterol. Also, while some foods high in saturated fat, such as processed meat, are linked to heart disease, other high saturated fat foods like dairy had no such effect.

A new paper by James DiNicolantonio, Sean Lucan and James O’Keefe in the journal “Progress in Cardiovascular Diseases” made a comparison between sugar and fat: To match the damaging cholesterol influences of the added sugar in a typical diet, one would have to eat 40 percent of daily calories in saturated fat (most people can eat only about 10 percent).

Decades of research have suggested that sugar is the real culprit when it comes to weight gain. High amounts of sugar, especially when not balanced with protein and fat, which the body breaks down more slowly, can lead to dramatic increases and drops in blood sugar.

All carbohydrates, such as rice and bread, are broken down into glucose that circulates in the blood to give us energy. Sugars get broken down quickly and raise blood glucose most dramatically. For the human body, a slice of bread and a packet of sugar are essentially indistinguishable.

“There are two definitions of sugar and fat, and the food industry has used them interchangeably to confuse people. There’s blood sugar and there’s dietary sugar. Dietary sugar is glucose-fructose. Blood sugar is blood glucose,” Lustig said. “With fat, there are two definitions: There’s fat around your middle (body fat) and there’s dietary fat. Does the fat you eat contribute to your body fat? The answer is, it does not. Eating fat doesn’t make you fat.”

Lustig said there was a correlation between obesity and diabetes, but there were countries that were obese without being diabetics, such as Mongolia, Iceland and Micronesia, and diabetics without being obese, such as India, Pakistan and China.

“If we’re fatter than them, how come they have a bigger diabetes problem than us? Obesity is increasing worldwide at a rate of 1 percent per year, yet diabetes is increasing worldwide at the rate of 4 percent per year. If obesity is the cause of diabetes, then how come the normal weight people are getting diabetic as fast as the obese person?” Lustig said.

There’s no question, though, that obesity is a risk factor in the development of metabolic syndrome. Metabolic syndrome is a cluster of conditions—increased blood pressure, high blood sugar, excess body fat around the waist and abnormal cholesterol or triglyceride levels—that occur together, increasing your risk of heart disease, stroke and diabetes.

“If thin people get sick, how can it be about you-eat-too-much-and-exercise-too-little? It’s not about obesity, it’s about the metabolic dysfunction, of which obesity is the result. We now have the paper trail and data that shows sugar, not fat, is the cause of all those diseases,” he said.

If eating sugar is bad, should we then stay away from fruits?

When you take the juice out of fruit, you take out the important part—fiber—Lustig said. When you consume the fiber, it forms a lining on your stomach that controls the absorption of sugar. When you take that out of the fruit and just take the juice, you take in all the sugar and water. That’s like drinking soda. So, it’s better to eat your fruit than drink it.

“Every diet that works has two things: low sugar, high fiber. You need five things to live: water, essential amino acids, essential fatty acids, vitamins and minerals. That’s all you need,” he said. “Everything else is not necessary. Carbohydrates are not on that list. Your liver can make glucose from protein.”