New Las Piñas destination: Tes Pasola, Tony Gonzales build ‘space where we can express whatever we want to do’ | Inquirer Lifestyle ❮ ❯ 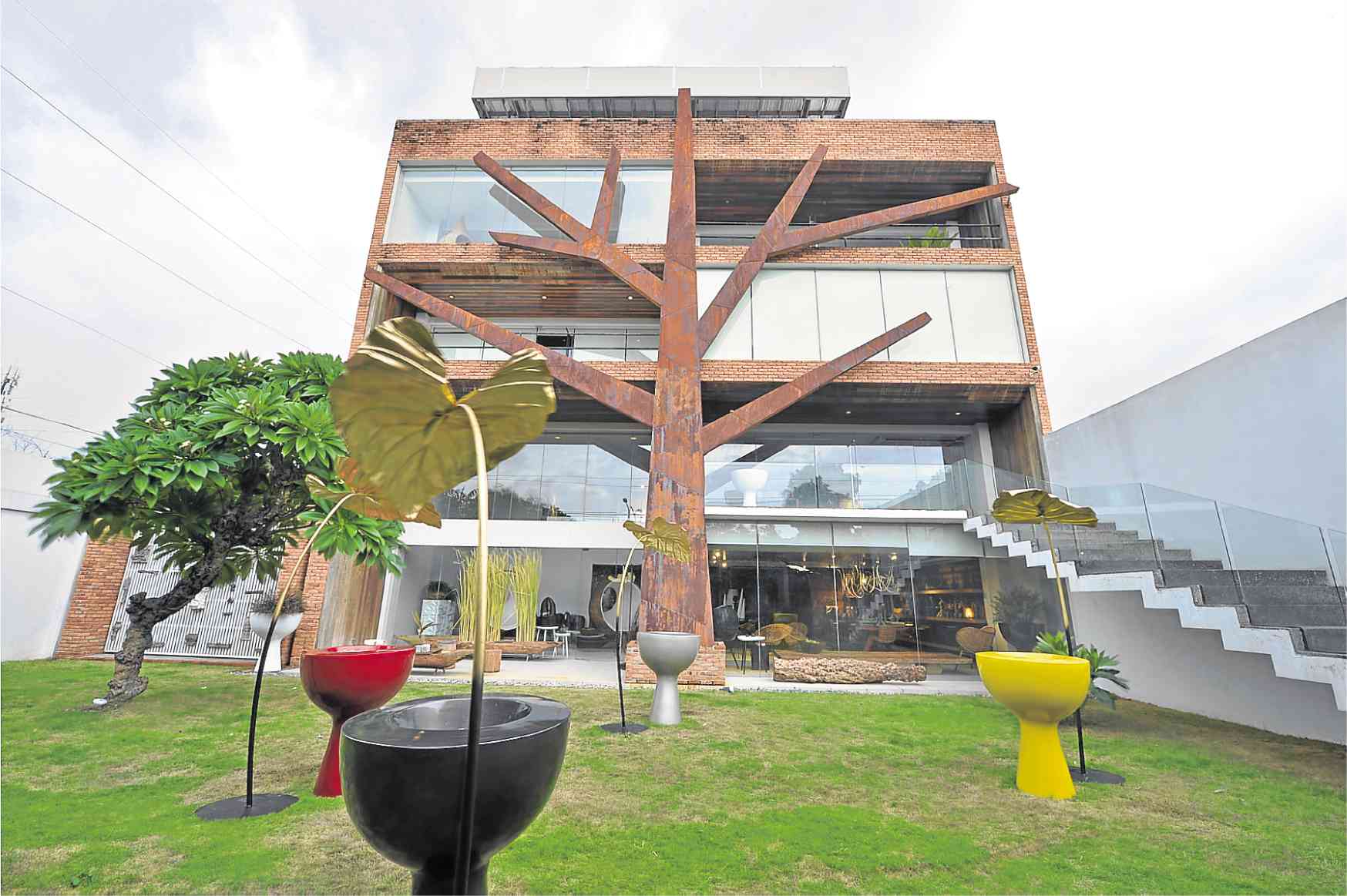 Bauhaus-inspired showroom is given a twist with a symbolic tree made of distressed metal. The garden is adorned with Pasola’s “gabi” leaves lighting fixtures. -PHOTOS BY PAUL SAN JUAN

New Las Piñas destination: Tes Pasola, Tony Gonzales build ‘space where we can express whatever we want to do’

After guiding furniture and home accessory manufacturers for over 30 years, designer-artists Tony Gonzales and Tes Pasola, this time, are satisfying their creative urge by creating a “playground” called One of T.
The name means “one-offs” or limited-edition objects, or “one of” Tony’s or Tes’ designs.

“We’ve been designing for companies, now it’s time to design for ourselves,” Pasola said.

“As consultants for Citem (Center for International Trade Expositions and Missions) and other companies, we always took in consideration that the design would sell,” Gonzales said.

“If a design doesn’t sell, it is not a good design,” Gonzales explained. “Over time, we thought we should have done it like this. With One of T, we don’t care if the design sells one or two pieces. Or how expensive it will cost to make it. We don’t call this a furniture store. This is a space where we can express whatever we want to do.”

He and Pasola highlight proportion, shape and surface material to produce something fresh and eye-catching.

“They are authentic,” German design consultant and long-time friend Detlef Klatt said. “They combine craftsmanship and typical materials of the Philippines but there’s this twist and different thinking. Tes, especially, shows humor. These details make a simple design special.”

The design and location of One of T are unconventional. The five-level building along Daang Hari, Las Piñas, stands out for its Bauhaus-inspired architecture—a voluminous brick building with a flat roof, devoid of embellishment, with huge expanse of glass and unadorned glass balusters.

The building uses recycled bricks from an old sugar mill in Quezon, wood salvaged from ancestral homes in Manila, and cast-off steel brackets from a ship. To soften the austere simplicity, Gonzales designed a tree, made from distressed metal. “When the building was constructed, I felt it needed something. We made a sculpture, the tree of life. It stands for ecology, strength and sturdiness,” he said.

Being graphic designers, both use calligraphy in unconventional ways such as lighting fixtures, backs of chairs, handles of spoons and forks.

One of T’s items draw influences from their trips. The visits to Germany are reflected in the architecture. The mosaic lighting fixtures are a reference to the intricate mosaics of the
Hagia Sophia Museum in Turkey. A large coffee table with carvings of the lyrics from “Both Sides Now” was inspired by the metal calligraphy on the door of Sagrada Familia in Barcelona.

The use of terrazzo, a composite of marble and granite, in tables and surfaces are reminders of the buildings in Europe.

Middle Eastern tent fabrics with Pasola’s silk-screened designs are made into pillow covers.

“Nobody would silk screen on traditional fabric. We want to put another dimension into materials,” Gonzales said.

There are finds such as ipil bowls from Palawan and canoes from Sorsogon that have been converted into coffee tables. Architectural fragments from old Pampanga buildings adorn the gate.

Pasola said she always challenged the conventional use of materials. She cites how paper is always seen as a flat dimension. Her experimentation evolved into her signature James Bound collection—die-cut, multicolor handmade papers, bound like books and fanned out into oversized vases with slim necks and wide vases.

Even flat metal sheets take on the shape of graceful elephant ears, and lilies that float in space. Her nature-theme designs reflect her penchant for gardening.
“I have spoons that talk,” she said, referring to flatware that says, “Be happy” or “Go for it.” Fine bone china cups are shaped like funnels. Ornate plate chargers contrast the simplicity of the plates.

A touch of the unexpected: placemats from Bicol are woven from paper.

Her giant chairs, which resemble two broken coconuts, are made with rattan, arurog and abaca. These complement the round area rugs made of bakbak that swirl into a little side table.

Gonzales is known for furniture with huge proportions but he shows slender profile chairs that echo the silhouettes of the ’60s. Instead of coming up with a sleek and minimalist look, he used the rawness of rattan with wrought iron.
Gonzales shows his respect for materials: A kamagong bench has a tail on both ends to highlight the dark grain. Driftwood is turned into a bowl or lighting fixture. The trunk of felled acacia is sculpted into giant jars.

The gallery displays a retrospective of the works of Pasola and Gonzales. Pasola used newspaper wound up into disks. Gonzales played with pulp to create a repetition of shapes.

One of T shares space with Maricris Floirendo-Brias’ t’nalak products such as stools and pillowcases. Fronting Brias’ algae-like screen are Gonzales’ onion bulb lamps, made of paper and arurog for Roche Bobois.

For Raphael Legacy Designs, a Cebu manufacturer, he
designed a long, mosaic, resin matchstick lighting that mimics the translucency of alabaster. The lighting fixtures have been tweaked by consultants Detlef Klatt and Joseph Crisanto.

Asked where is design heading, Gonzales says there’s a thin line between design and art.
“With mass production and computer, people want something individualized. The Philippines is not a mass-manufacturing country. We have many craftsmen. If you want
to go high end, the way is between art and design. We started or came from design. Now we start with art before design.”
—CONTRIBUTED