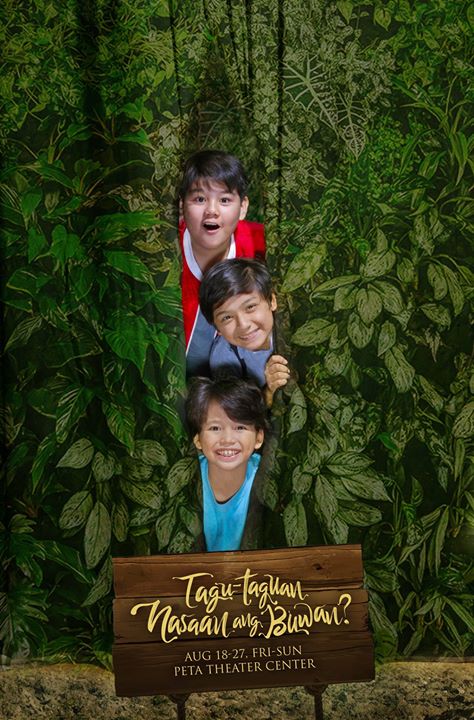 Storytelling and remembering in ‘Tagu-taguan,’ a new children’s musical

Playwright J-mee Katanyag has written a children’s musical about a young boy, Popoy, who tries to save his forgetful grandmother, Luna. He does this by looking for her stories that have been imprisoned in a dark realm of fear, guarded by the evil monster Papaw Halimaw.

“I usually forget things like locking the door, my brother’s birthday, my anniversary with my boyfriend,” says Katanyag. “I’m fascinated by memories, how the mind works, how the heart and other senses remember.”

Her one-act play “Betang,” an entry at the Virgin Labfest a couple of years ago, also deals with a memory-challenged protagonist who only remembers her one true love.

The act of remembering and the emotional impact of memories aren’t just the premise for this musical, they’re also aspects that informed how Katanyag wrote the material.

That this musical is part of Peta’s golden season wasn’t lost on the young playwright. Katanyag took the opportunity to make a new work for the group by respectfully looking back at Peta’s long heritage of children’s productions.

“I went to our library to read scripts and watch videos of Peta’s previous children’s plays to serve as my inspiration,” she says.

She also looked to her own experiences teaching Peta’s children’s theater workshops and the lessons she learned from the person considered as Peta’s pillar of children’s theater, the late Ernesto Cloma, who died Dec. 27, 2016.

“Tito Ernie developed a creative pedagogy for children’s theater, using, for example, the use of fun theater games to teach children.”

Katanyag goes on to recall how Cloma was known as the Little Giant. “He’d attend international conferences and would speak to hundreds of delegates without using a mic; he’d just use his voice projection. He didn’t use Powerpoint presentations because he’d use his own body to demonstrate how effective theater is for education.”

She personally witnessed his mastery of facilitating children’s workshops. “He was able to make children focus. You could see the twinkle in their eyes as he told them different stories. He always had new stories, new games to share.

“He had a way of making it fun without you realizing that you’re already making a theater show with children. He taught us how fun it is to learn and create while playing.

“He was always there to empower and guide us. He taught us to trust children’s abilities. To trust ourselves to create effective syllabi to teach children with. To trust yourself as a facilitator to mine the gold within every child.”

While writing this musical, she realized that all the elements she was working hard to incorporate into the play were influenced by Cloma.

“While I was writing the musical’s conclusion, I realized that Tito Ernie is the forgetful Lola Luna! He had dementia toward the end of his life. I got goose bumps when I realized that this musical is for him.

“All her life, Lola Luna offered her stories to help children to believe in themselves, but her memories are fading. What will happen to her wonderful stories?” Katanyag asks.

But Katanyag already knows the answers: to keep on retelling them, to teach others how to tell them, and to keep on telling new stories. —CONTRIBUTED