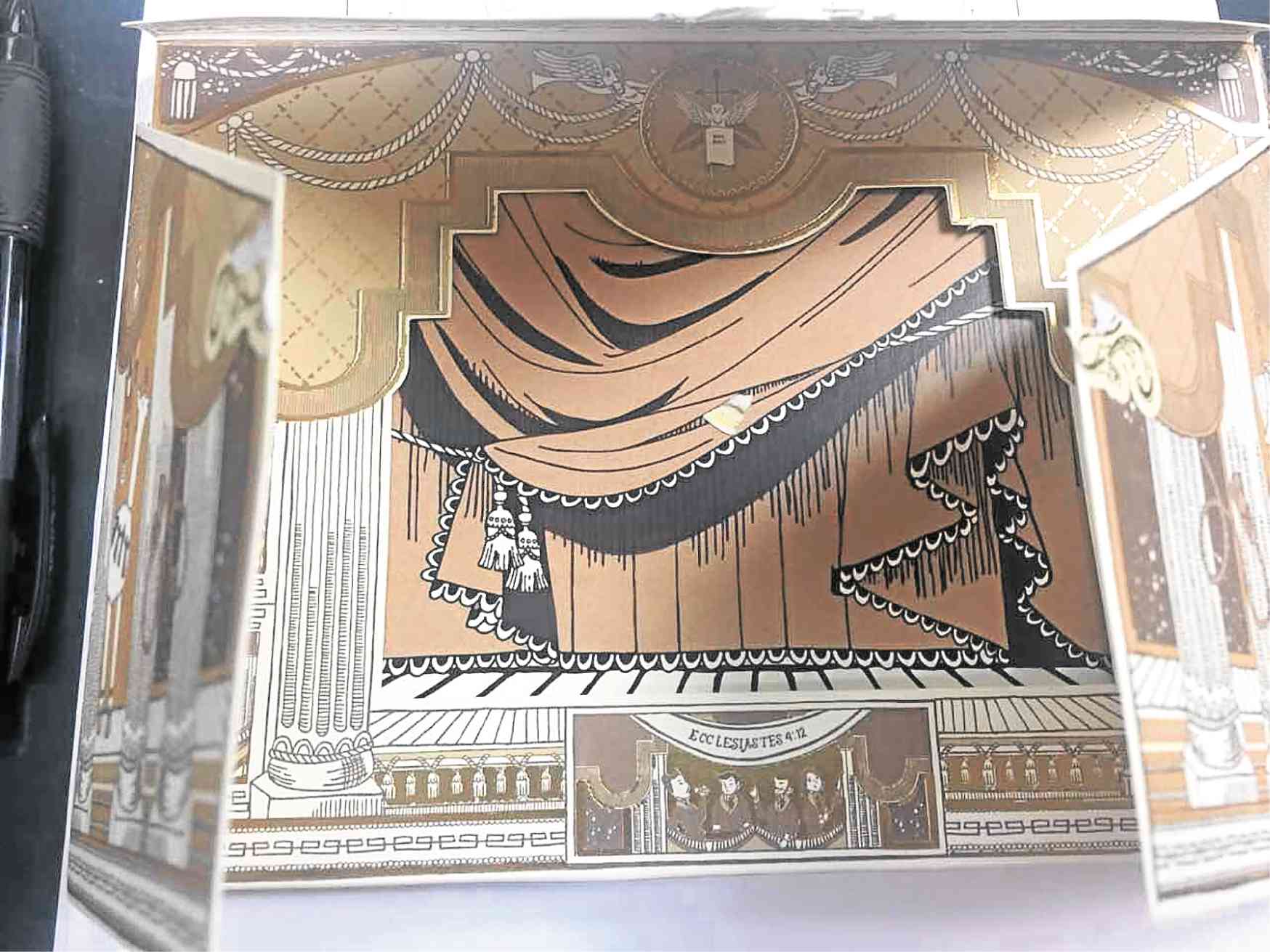 The invite is inside this elaborate illustration of a stage, its back displaying the letters H and V, the couple’s initials.

Now people are curious to go to Margarita Fores’ restos; guess why

We ran into Margarita Fores the other night in her restaurant, Grace Park, and she seemed to be in high spirits, no matter that her name has been dragged into the Andy-Tisha Bautista scandal, just because she was—was—the girlfriend of Alvin Lim, the man being linked to Tisha. Margarita’s name is inevitably mentioned in the news (including fake news) stories and gossip columns. Collateral damage, some would say; press mileage, others would see it.

“Must be that. Don’t know why, but my restos are suddenly seeing a spike in diners,” she said, with embarrassed giggle.

People might be suddenly curious about the famous chef linked to the alleged third party in the Bautista marital breakup. Perhaps diners want to catch a glimpse of her.

Margarita is no stranger to publicity, the good kind. The daughter of the prominent Araneta-Fores clan (a cousin of Mar Roxas), she worked hard to be where she is now—on top of her game, a top influencer in the culinary industry. She was named Asia’s Best Female Chef, was one of the movers behind Madrid Fusion Manila, is a proponent of Casa Artusi cooking, and runs a successful restaurant chain (Cibo, Lusso) and catering business.

In the past two decades, she’s helped put Italian cuisine in mainstream dining mainly by introducing highly innovative, creative yet delicious dishes in her restaurants.

For a so-called heiress who doesn’t really need to hold a job, she’s been an indefatigable worker.

Some would say that when her 18-year—yes, 18—relationship with Alvin ended, she plunged deep into work, and it’s been that way since.

It’s true that she and Alvin were close to the Bautista couple—she is the godmother of one of their sons. That’s why now, she’s somewhat concerned about the effect of this media circus on them.

It’s also true that Tisha, with her noted “third eye,” was the one who told her, in one of Margarita’s “readings” with her, that she (Margarita) and Alvin were already bound for “separate paths.” Contrary to the buzz, Tisha didn’t say that Alvin would leave her for another woman.

And no, she and Alvin had made no attempts to reunite.

On to another couple whose story the media has followed through the years—Dr. Vicki Belo and her longtime beau, Dr. Hayden Kho, are finally tying the knot on Sept. 2 in Paris.

After a storied relationship that spanned 12 years, the couple are taking the plunge, and have sent out the invitation that reads: “Desiring God’s will for their lives and believing his will includes each other… Vicki & Hayden invite you to share in their joy as they are finally united in the Lord Jesus Christ…”

The invitation is in an envelope that’s an elaborate illustration of an opera stage with tasseled draped curtains and solid columns—quite symbolic, I think, of their relationship that played out as if on a stage, its ups and downs lapped up by the entire country, including the Senate, its conflict and denouement certainly of Greek drama proportions.

Now Vicki and Hayden are one in saying, “Patience and forbearance pay off,” or something to that effect.

On the back of the invite runs a thought-provoking reflection: “…Love is stronger than death and jealousy is cruel as the grave… Put love above all else; let Christ’s peace rule your hearts… Receive each other in sincerity; find mercy and grow old together.”

And—they have a beautiful two-year-old daughter, Scarlet Snow, who’s now the most celebrated child on the internet, with a million followers.

Scarlet Snow will be one of the flower girls, the others being Maria Letizia Dantes (daughter of Dingdong and Marian) and Taylen Joy Tan-Chi.

More than 200 guests are expected to fly to Paris for the wedding. So—you can just imagine how some are speculating who made it to the guest list or not of this wedding of the year.

But that story—ongoing at press time—is for another day.