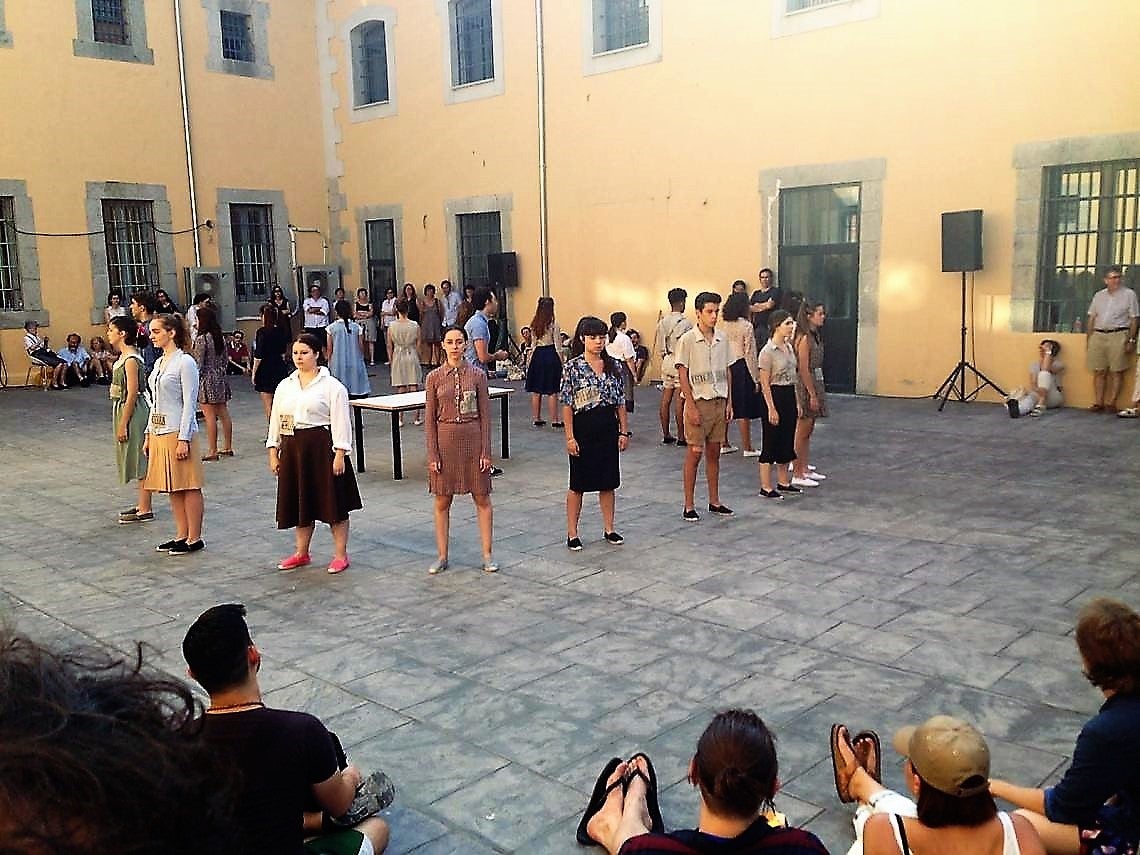 Beyond ‘The Wayside Café’: Young theater voices soar in Shanghai and Segovia festivals

Here are three more impressions I got from two recent international festivals—the 2017 Asia-Pacific Bond of Theater Schools (APB) Festival held June 13-19 at Shanghai Theatre Academy in Shanghai, China; and the Inaugural Student Theater Festival of International Theater Institute (ITI)-Unesco’s Network of Higher Education in the Performing Arts in Segovia, Spain, held July 13-23—that, in my mind, signal the shape of the theater to come.

In my experience, much of theater has been director-centered. While actors and designers may be given some freedom to play their parts, a lot of major choices in theater creation rests on the director—the concept and blocking scheme, for instance.

In contrast, much of the theater we saw in these two festivals were actor-centered, from the selection of the material, to the forms of theater-making used, the initial design ideas, and even lines of a play, if these were even needed. The director and members of the artistic staff facilitated and provoked, but the overall outcome of a production rested, in great part, on what actors produced during rehearsals.

What surfaced, then, are not works based on a single auteur, usually the director, but a “collective auteur-ship.” In this joint undertaking, actors become more empowered than in a traditional setup. This empowerment often translates to stronger convictions on stage.

To cite a case: The Segovia Festival’s culminating presentation grouped the student delegates into six teams, all internationally mixed, with each team asked to devise a short presentation around the theme of ‘Home.” The setting was the inside of a former women’s prison in Segovia, a building called La Cárcel. The students rehearsed for five days in any place they chose, with the director checking their progress on the fourth day.

Two hours before the show on the fifth day, the director looked at the different presentations and, in consultation with the students, suggested an order of presentation. The show that followed was fresh, daring, innovative and provocative, with the prison setting used in novel ways.

The amazing production thus prompted Georgetown University’s Derek Goldman, the UNITWIN Student Festival co-director, to brand the culminating show, and the entire Student Festival itself, as one of the major highlights of the 35th ITI World Congress.

Another kind of actor empowerment appeared in the solo performances that punctuated the festival productions. Gathering an audience around them in an open-air setting, actors performed their own devised compositions. Jeff Fagundes from Brazil stripped naked to express his vulnerability to the violence around him, while Sayik Siddique from Bangladesh regaled his audience with song and dance as he narrated his version of “Romeo and Juliet.”

The culminating presentation at La Cárcel had audiences move from one space in the prison to another—the admission room, the actual cells, the corridors and stairs, an open sun-drenched deck. Outside the innards of the prison—in the yards, the pathways and lobby—students from the Instituto Universitario de Danza Alicia Alonzo, Universidad Juan Carlos Rey in Madrid staged their own devised street theater experience, “La Cárasca Amarga” (The Bitter Shell), which portrayed the brutalities of the fascist regime, one of the darkest periods in Spanish history.

Performances, some big and some small, occurred simultaneously in several spaces where audiences could come and go, and then connect the scene they watched with another one they viewed in another space. In so doing, audiences formed their own narrative sequence to reflect upon as they moved along. An immersive experience!

The standard theater arrangement is for performers to stay on one side of the theater and the audience on the other side. These performances broke that barrier, as other shows did even while adopting a proscenium arrangement. “The Balancing Act,” a performance by the International Association of Performing Arts in Pune, India, on the theme of child bullying—and using gibberish as dialogue at that!—began by having actors, playing as children, walk up the audience area to chat and play simple games with audience members before the actual show.

Switzerland’s “The Object of Things” had four tables and audiences from one to the other to watch the show. Most dramatically, from Slovenia, the Russia University of Ljublana did a daring interpretation of “Conference of the Birds” and, toward the end, invited audience members to step down from their seats, join the actors on stage, sip glasses of wine, and find themselves performing as guests in a party, applauding the main characters as they entered the stage for the play’s final scene.

No need for a meet-and-greet affair after the show. Grotowski’s experiments with audience engagement had found new life!

Commitment to the social

Many plays with social and political themes usually reflect the convictions of the playwright, director or both. Actors may share these convictions, but this sharing is not a necessary requirement for the role.

But wouldn’t a play be more persuasive if the actors themselves strongly held and displayed the social and political convictions underlying a performance?

Such was the case with the American entry, “I Pledge Allegiance,” a production of the Performance Laboratory for Global Politics, a theater company housed within Georgetown University’s School of Foreign Service. The play had five students of mixed heritage (one a Filipino-American) who were actually struggling with their own identities as Americans and simultaneously analyzing policies under the Trump administration as part of their course of studies.

Their devised work, which they themselves wrote and directed, exposed their frustrations about being American while having to recite the Pledge of Allegiance. These actors were not playing characters; they were being themselves. Their performance thus edged toward the boundaries of documentary theater. Powerful stuff!

You got the same sense of shared conviction in India’s “The Balancing Act,” and Iran’s “A Week of Walking in Paradise,” which was about the frustrations of living in a violent town.

Allegory, in turn, was the force that prevailed in “The Emancipation of Alice Paws,” a production by the Western Australian Academy of Performing Arts (Waapa). The central characters were two dogs, each played by an actor, whose experiences of freedom and constraint largely depended on their masters. Student actors collaborated with a playwright in asking questions about freedom and social responsibility; the shared conviction then informed the performance.

The Philippines is, of course, no stranger to socially committed theater, but it needs to make it a key part of actor training—a committed theater that does not exacerbate polarization, but instead fosters conversation among political camps.

Young people around the world, millennials for the most part, are changing the face of theater. In Shanghai and Segovia, these millennials sat together every day to share passions and desires. They talked about collaborations, about doing theater across countries, and about learning more about forms of theater-making.

To them, theater is not simply a matter of aesthetics or entertainment. It is, rather, a commitment to change.

Festivals spark such ideals. It remains to be seen how these ideals become reality in their respective home worlds. And for those of us who believe, as I do, that theater is a weapon of change, the task lies in offering young theater artists havens for collaboration and creativity so that they can continue, once we fade away, to confront the wilderness that is society out there.

Beyond “The Wayside Café,” young theater voices are roaring and rising, getting ready to bring light to a new day.