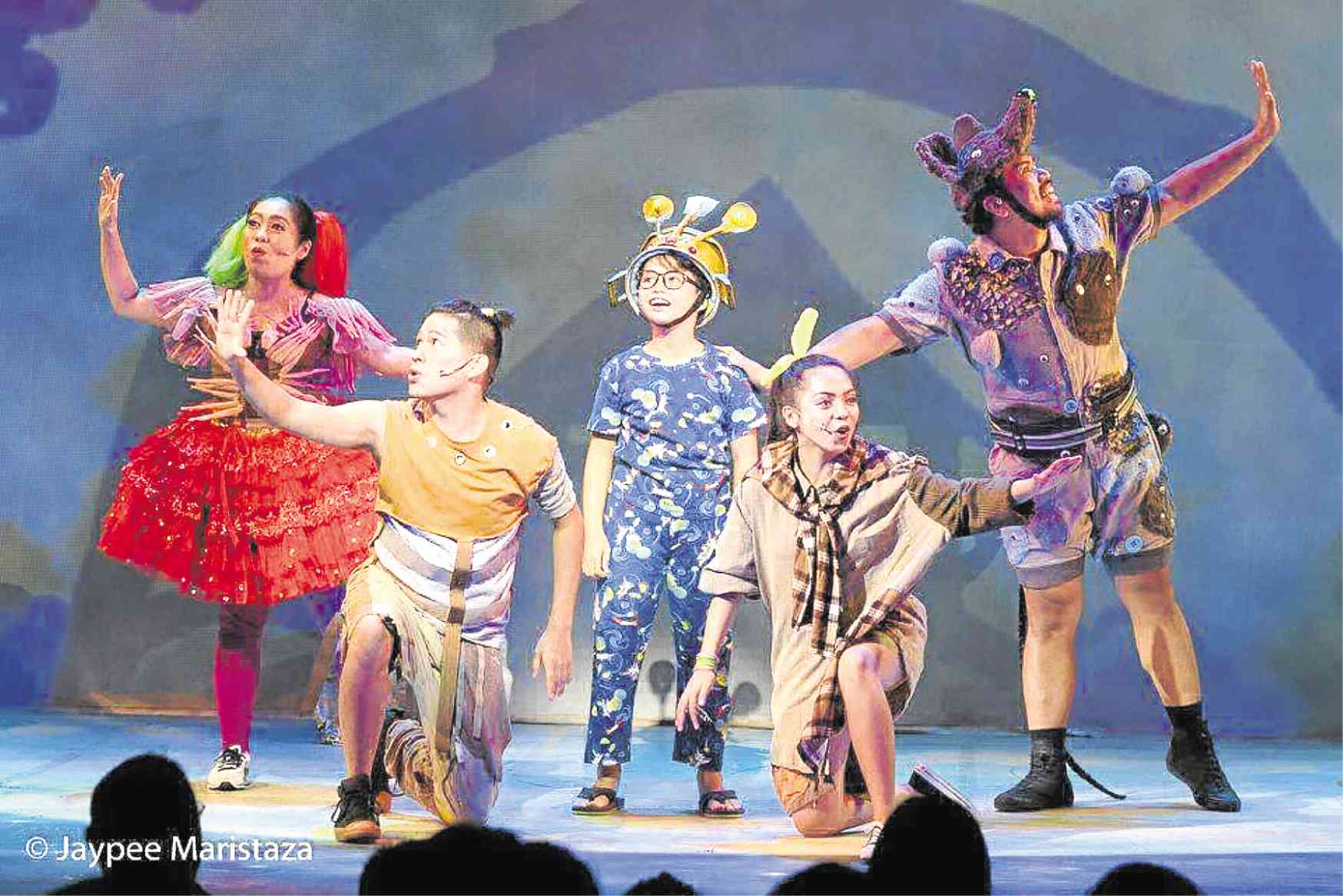 It is one of the rewards of following theater over an extended period of years that the pleasures of outstanding current productions can be enhanced by reconnecting to past experiences.

Hence, enjoyment of Sugid Productions’ recent staging of “Buwan at Baril” is deepened by indelible memories of Philippine Educational Theater Association’s (Peta) original Raha Sulayman production way back in 1985, while it is fascinating to compare Repertory Philippines’ “Agnes of God” last February with its own 1983 version.

It may not even be a case of restaging the same play: watching “American Idiot” last year, my first rock musical in decades, brought back memories of “Jesus Christ Superstar” in 1971!

On the last weekend of August, I took in a spate of feel-good productions, all young and fresh, which also allowed me to refresh past theater-going pleasures.

Over the years, Peta has had the endearing tradition of staging simultaneously entertaining and socially relevant children’s plays (“William” is my favorite)—a welcome antidote to the Western children’s fairy tales which have been the usual staple of Filipino youngsters.

Its new “Tagu-taguan, Nasaan ang Buwan?” is a delightful and quite clever roping in of several of its classics in this tradition—“Ngo Ang Dagang Patay,” “Batang Rizal,” “Ang Tiririt ng Ibong Adarna,” “Ismail at Isabel,” “Hans Christian Andersen Must Be Filipino”—into a beautifully written (by J-Mee Katanyag) framework morality tale, at once whimsical and bittersweet, of family dysfunction and reconnection, and the power of both folk tales and childhood imagination.

The storytelling is wonderfully structured in layers, intriguing without being overly complex, and retaining the essence of the component stories. In the process, it allows a reliving of those classics while setting them in a fresh context.

All the production elements come together—stage design (Charles Yee), costumes (Leeroy New), music (Jeff Hernandez)—for an elegant simplicity. Obviously, it helps if one has watched the original plays, and hence I was able to delight particularly in the referenced stories of “Batang Rizal” and “Ngo.” Otherwise, where I was more unfamiliar with the back stories, my attention could occasionally flag.

But no matter: the play is so wittily constructed, directed (by Dudz Teraña) and performed. Albert Silos was boyishly winning as the central Popoy, but  Roi Calilong and Joan Bugcat were particular comic joys in their speech-impaired and schizophrenic roles, respectively.

The ending that wraps it all up is so poignantly affirming that one comes out feeling buoyant and full of goodwill.

Back in the ’80s and early  ’90s, I got to watch the traditional komedya, a true Filipino grassroots art form if ever there was one, at its home ground in San Dionisio, Parañaque, and at the Cultural Center of the Philippines. It was always an enthralling experience.

So it was now wonderful to watch the University of the Philippines College of Music’s production of “Putri Anak,” a freshly composed and mounted komedya that breathes new life into the genre.

Visually and musically, it was beautifully done—music, choreography, sets and costumes, skillful direction by Jina Umali. But more fascinating was how it was able to meld the essential elements of traditional komedya—the stylized batalla, the earthy clown figures—with both a more “oriental” flavor (touches of Javanese wayang and Indianized myth) and “modern” sensibilities (feminine independence, transcending factionalism versus a common evil).

Purists may cavil at such adaptations, but it was refreshing to see how an adventurous approach could balance tradition and innovation to keep a genre alive. As expected in a komedya, story sophistication took a backseat to storytelling magic—and some of the staging was pure magic, like the wonderfully realized deer character (gone too soon).

Admittedly there were some overlong numbers, and the central figure of the celestial maiden I did not find as vividly written as the contending warriors (in particular, the figure of Sultan Magnaye was surprisingly nuanced). But, overall, it was a rousingly epic and evocative theatrical evening. (I should note that contributing heavily to my appreciation was the company of a brilliantly komedya-knowledgeable friend, Nikki Carsi-Cruz, who cued me in on the finer points of the tradition, as well as our interaction with San Dionisio komedya doyenne Grace Jaramillo.)

When I watched the same group stage the same 45-minute play in the same little theater this weekend, it was astonishing how freshly powerful it felt (let alone relevant—one interpretation of this complex play, written, it had to be recalled, by a high school student, is as a parable of fascism), and still totally acted out by high school kids. Some things have changed: It is, for the first time, directed not by the ever-young Onofre Pagsanghan but by an actually young Romar Chuca, himself a Sibol alumnus—perhaps, encouragingly, a torch being passed. And, in contrast to my first viewing, the staging was now more daringly unconventional, the bulk of the audience hunkered on stage in the thick of the action, the tiers of theater seats employed (sometimes a trifle awkwardly) as part of the production space.

The ensemble now included girls. More intriguingly, there were slyly subliminal flashes hinting at a version with girls playing the lead roles, a truly subversive idea. (Indeed, I confirmed this after the performance and I am now keen to catch the play again with this novel casting.)

It was very much a heart-on-sleeve high school production, with a rousing national anthem complete with flag carried up front and center and the play proper framed by spiritual chorals. With the wrenchingly passionate performances (by teenaged boys in this case), it was all quite exhilarating.

Three plays in one weekend, all of which might be considered “small” and pitched to limited young audiences—but to this viewer’s mind, as rewarding and worthy of attention as any glitzy professional production. All bearing witness, in their different ways, to the continuity and vitality of Philippine theater. —CONTRIBUTED