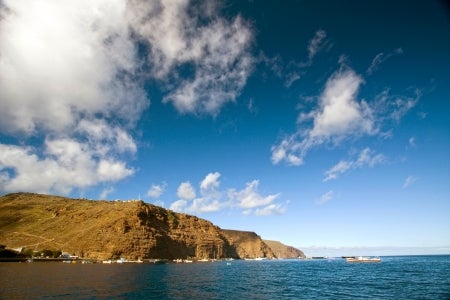 Made famous by French Emporer Napoleon Bonaparte who was exiled there from 1815 until his death in 1821, the island of Saint Helena has long been too remote to be affected by tourism. But this may be about to change. From October 14, the South African company Airlink will begin weekly flights from Cape Town and Johannesburg. Flight time will be about six hours with a stopover in Namibia. Until now, the tiny British territory was only accessible by boat.

Located in the South Atlantic to the West of the Namibian coast, Saint Helena is one of the world’s most inaccessible destinations, a fact that figured large in the decision to imprison Napoleon there in the 19th century. Until now, visitors to the minuscule British territory of 122 square kilometers have arrived on the Royal Mail Ship St Helena from South Africa, which takes at least five days to reach the island from Cape Town. Not surprisingly, the announcement of the new air link amounts to a revolution for the 5,000-strong community that lives on the volcanic tropical island.

Jamestown the first and only port of call

Life in Saint Helena is focused around island’s only port, Jamestown, the point of arrival for visitors. The more courageous among them will climb the 699 steps of Jacob’s Ladder, a historic staircase that offers panoramic views over the island’s capital. Fitter visitors will also be keen to make Jamestown the point of departure for a trek to the nearby Heart Shaped Waterfall. A tour of the town’s parks is also recommended for the opportunity to encounter some of the plants that are endemic to the island. However, for a more potent experience of nature, Diana’s Peak National Park, which is located 823 meters above sea level, features native snail and insect species as well of magnificent views on all of the island.

A major event in the island’s history, Saint Helena continues to be associated with the French emperor’s exile. The former Corsican general spent the last years of his life from 1815 to 1821 on the island, where he initially stayed in the Briars Pavillion before moving to his permanent residence in Longwood House. Both of these buildings are open to tourists, who usually conclude their historic tour with a visit to Napoleon’s tomb. Combined tickets for all three sites are on sale for £10 (around $13). The Saints, as the islanders call themselves, commemorate Napoleon’s death on May 5 every year. JB