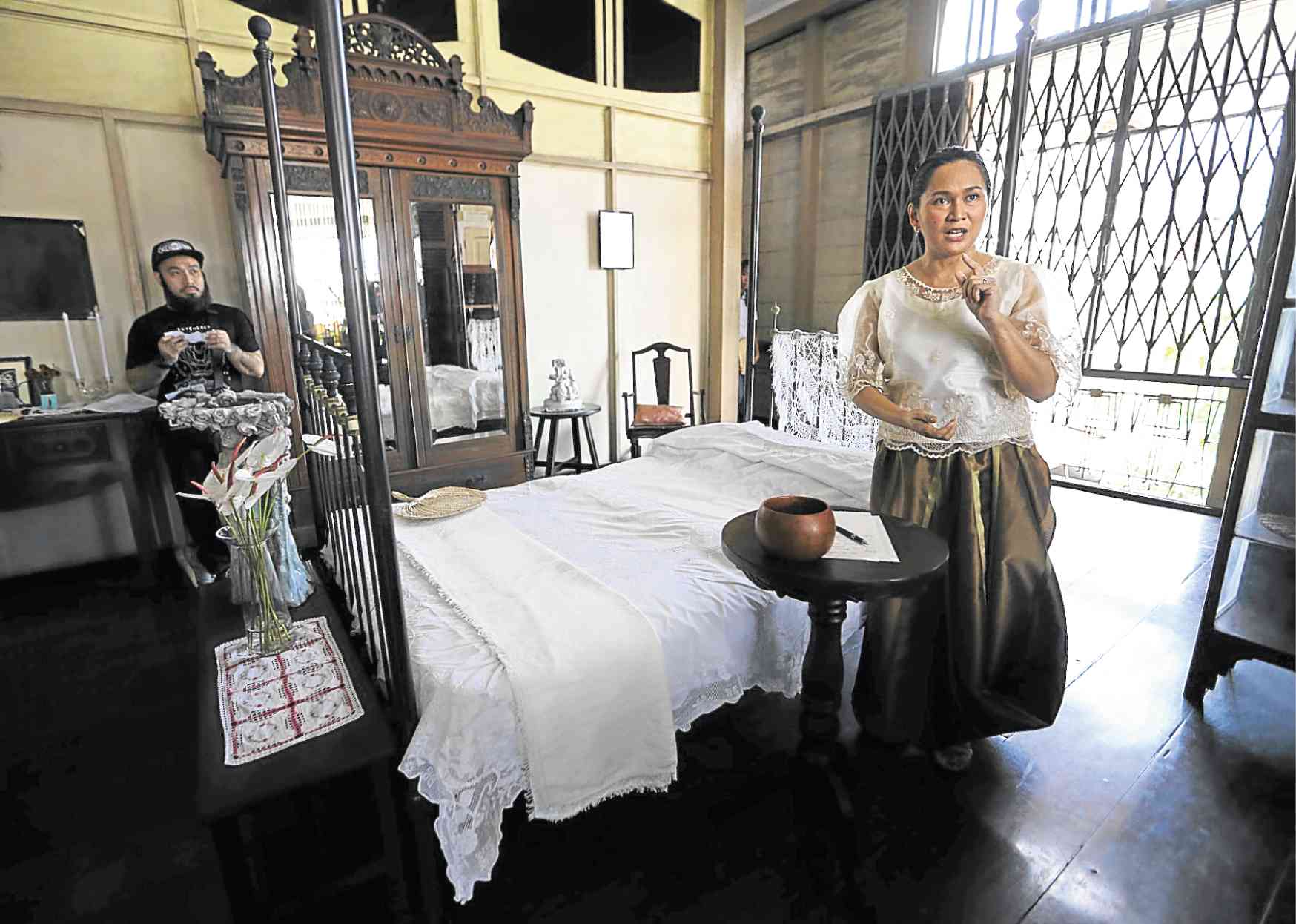 Wenah Nagales as Oryang the homemaker instructs the househelp and the youth. This is Gregoria de Jesus’ original bedroom in Bahay Nakpil-Bautista.

The passion of Gregoria de Jesús, reenacted in a Quiapo heritage house

Bahay Nakpil-Bautista, a heritage structure incongruously ensconced in a Muslim community on A. Bautista Street (formerly Barbosa) in Quiapo, recently presented a multidisciplinary performance on the life of Gregoria de Jesús, a.k.a. Oryang, the Lakambini of the Katipunan.

The site-specific performance, “Memory as Place, Place as Memory,” was part of Artkitektura, the festival celebrating “holistic approaches to architecture and built environment,” which runs until Oct. 8. It was produced by festival director Sarri Tapales and supervised by Philippine Educational Theater Association (Peta) artistic director Maribel Legarda.

The house, known in the old neighborhood as Tahanan ng Mga Katipunero, was selected as venue since this was where Oryang lived after the execution of her husband of four years, Katipunan founder Andrés Bonifacio, and she married his vice president Julio Nakpil a year and seven months later.

It had also been home to two other key figures in the revolutionary movement, Dr. Ariston Bautista-Lin and Francisco Nakpil, and architects Juan Nakpil and his cousin Angel.

The house was built in 1914 in the Vienna Secession style by Arcadio Arellano for Bautista-Lin and wife Petrona (Julio’s sister). It is now a museum.

Guests ascended from the entrance hallway (zaguán) and were welcomed at the staircase landing (descanso) by a costumed Wenah Nagales playing Oryang the homemaker.

The sisters ran commentaries on the history and architectural style of the house; the lives of its prominent residents; the old neighborhood and vanished landscape—as they ushered two groups to the second-floor hall (caida) and led them from room to room in their trailing turn-of-the-century baro’t saya.

In a showroom of KKK memorabilia, the Lakambini was portrayed by Raven Ravelo through a dramatic monologue depicting what Legarda calls “ritwal ng pagsusumpaan.” This vow of marital union is intertwined with the vow of love for country.

The performance was counterpointed by a soundscape of Jethro Joaquin featuring the harsh voice of Oryang’s father disapproving of Andrés for being a Freemason and trying to separate the lovers.

In the master bedroom, Oryang as Filipina was interpreted through a vigorous dance by Kris-Belle Paclibar, by turns flighty and earthbound, as choreographed by Agnes Locsin. Here she was as woman warrior and young widow coming to terms with Andrés’ death.

In the drawing room, Oryang as wife was depicted in two segments Legarda describes as “the bridging of two loves.”

This segued into her sweet dance with Joshua Cabiladas as Julio, to the music of the soldier-composer’s award-winning habanera “Recuerdos de Capiz” on the gramophone. With the flick of a finger, we witnessed the two loves of Gregoria de Jesús.

In her original bedroom, her role as homemaker was depicted by Nagales through a soliloquy instructing the househelp what to buy in the market, enumerating a list of ingredients for her cooking.

(It is said that from her window Oryang would fish from a creek running behind the house—the Pasig estuaries were that clean and abundant then.)

Finally they were led to the dining hall (comedor) and treated to a simple merienda of kapeng barako, suman biko and puto cochinta daintily served on bone china.

Since Oryang was known for her home cooking, Legarda says it was only fitting the finale should be set here, “as a celebration of her life—because food is life.”

Two successive performances that day were attended by a group of 20 and another of 35.

Legarda says the whole performance explores Oryang’s different states of mind, as metaphorized by the way she wore her saya in the various stages of her life.

She says it took them four intensive rehearsals and about a month integrating the performance into the layout of the house to form a narrative. The production plays around what is available in the house, showing how architecture is alive through the interactions of people living in it.

The festival—presented by Architecture Steiner, Iona Stitching, Citydesigner and Ayala Museum—aims to give people “a fresh experience of architecture and the performing arts outside the stage,” says Tapales. This year’s theme is “Wholeness through Architecture and the Arts,” exploring the 12 human senses through them.

Tapales, who suggested the integration of venue and performance, is the Santos-Viola sisters’ niece.

“We’re happy that the younger generation is involved,” says Peachi Gaston, “because we’re leaving the legacy to them.”

She says her sister Bobbi, president of Bahay Nakpil-Bautista Foundation, is also carrying on the legacy of their grandmother: Every Saturday, she holds a storytelling session with 10-15 streetchildren in the neighborhood, as Oryang used to tell fairy tales and Lola Basyang stories to her six children.

Gaston recalls this year is also the 150th birth anniversary of their grandfather.