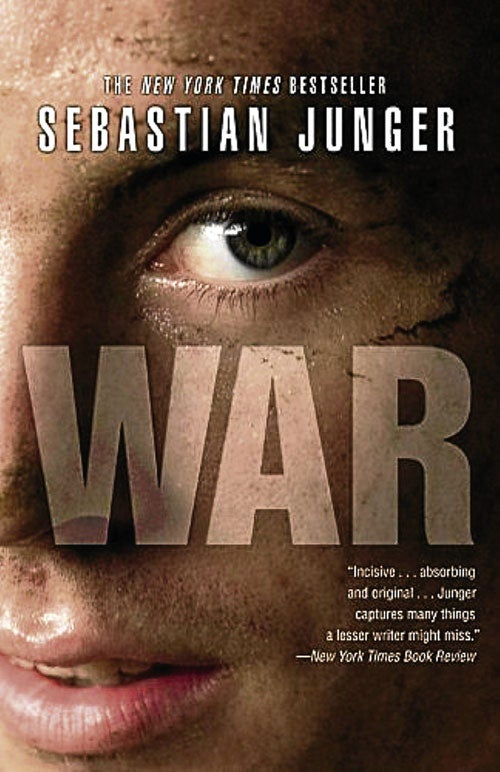 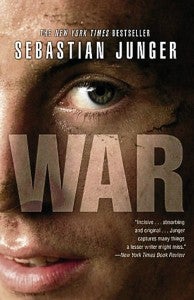 The journalist had explored how firefighter face down massive forest fires (“Fire”), how fishermen stand up to waves as high as buildings (“The Perfect Storm”), even how a serial killer might have touched your past (“A Death in Belmont”).

But all that didn’t compare to what Junger went through in the course of writing his new book “War” (Twelve, New York, 2010, 286 pages). From 2007 to 2008, Junger visited Afghanistan five times usually with British photojournalist Tim Hetherington, embedded with the American soldiers of Second Platoon, Battle Company, 503rd Infantry Regiment, 173rd Airborne Brigade.

At that time, Second Platoon was assigned to the Korengal Valley, a stark territory swarming with Taliban fighters where Americans found themselves under fire every day, a posting considered the deadliest posting in the US military.

Junger introduces readers to the shockingly young men of Second Platoon as well as to their most recent loss: the platoon medic, Private First Class Juan “Doc” Restrepo, is killed in action. The members of Second Platoon are soon tasked to establish an outpost (OP) on what is essentially enemy territory, and dub it “OP Restrepo” in honor of their fallen comrade. That outpost will receive enemy fire almost constantly and readers will see what happens to soldiers in that situation over 15 months.

This was something Junger pondered: “I was to spend weeks at a time up on that hilltop, and it soon became clear that if I were to get killed over the course of the next year, Restrepo was almost certainly the place it would happen. It wasn’t likely but it was possible, so I had the strange experience of knowing the location of my fate in advance. That made Restrepo an easy focus for all my fears, a place where the unimaginable had to be considered in detail.”

Junger and Hetherington shot video during their stays with 2nd Platoon and they constructed the documentary “Restrepo,” which won the grand jury prize for documentary at 2010 Sundance Film Festival and was nominated for an Oscar. “Restrepo” can be considered the visual companion to “War.” Tragically, Hetherington was killed in April during the unrest in Libya.

What Junger fashions is a portrait of a tightly knit brotherhood of combatants known mostly by their surnames—O’Bryne, Pemble, Jones—where big ideas are invisible and the only thing that matters are the men beside you. Junger boils down the combat behavior of the soldiers, covering each other, as a kind of dance.

Characterizing combat as something like a drug, with its requisite highs and lows, Junger is like a sniper hitting just the right targets, while ejecting his fear like smoking spent cartridges.

In that sense, Junger has put together what is a reflection on modern combat, as he takes it all in then discusses it in beautiful, often poetic language. It is more introspective than that magnificent chronicle of an operation gone wrong, Mark Bowden’s “Black Hawk Down,” becoming a kind of collective and extended version of US Navy SEAL Marcus Luttrell’s harrowing “Lone Survivor.”

“War” is true participatory journalism, where Sebastian Junger really did put his own life on the line to bring readers into the reality of the contemporary battlefield, rendering what is both ode and elegy to the American fighting man and reminding us, in the end, that “courage could be thought of as a uniquely human trait.”