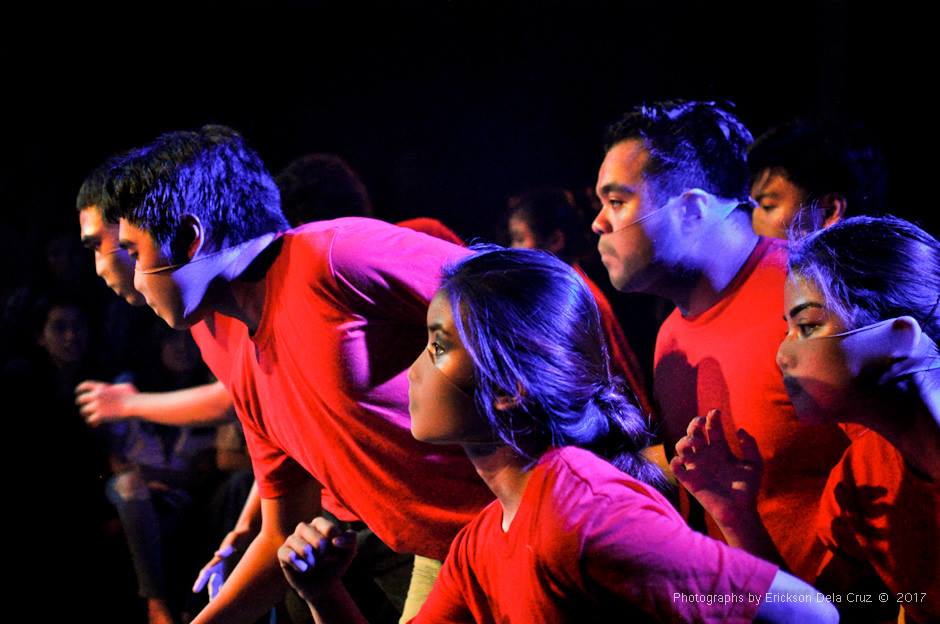 ‘Janus Silang 2’ is catnip to its millennial audience

Building on the savvy streak of its prototype predecessor, Tanghalang Ateneo’s “Janus Silang at ang Labanang Manananggal-Mambabarang” weaves a mythological montage of its own.

The sequel, the second installment in Edgar Calabia Samar’s celebrated series, kicks off with a flashback by two narrators to the events of the first book. While “Janus Silang 1” dealt with our boy-hero’s encounters with a malevolent tiyanak, “Janus Silang 2” chronicles his adventures amid an imminent war between the lofty manananggals and the crafty mambabarangs.

One easily empathizes with Janus Silang (Earvin Estioco)’s struggles: his search for a father who might still be alive; his reluctance to rescue a wayward pal; his soliloquy over the fragments of an erstwhile love. Much of this relatability comes from the fact that he is hardly messianic—his friends and guardians highlight the adage that one does not climb the rungs of success alone.

These mentor figures are ably embodied by the indefatigable duo of Mang Joey (Renante Bustamante) and Mang Isyo (Xander Soriano), who spice up the stage with their complementary personalities.

Miro (Shawn Landayan) and Mira (AJ Umali) portray twin siblings fraught with fear, confusion and disbelief—albeit with some tentativeness—upon discovering their maturing powers for the first time, paralleling the rude awakenings of adolescence.

In contrast, Jenny Jamora as Ester the manananggal commands regal authority. She is both understanding and terrifying, sympathetic and emphatic, especially when her involvement in Janus’ life is revealed.

The play indulges its millennial spectators with a generous interjection of popular colloquialisms (“pak ganern,” “charotero”) plus a hugot line or two (“Alin ang mas madaling mahalin—ang nasa alaala mo o ang nasa tabi mo lang?”) At the same time, it revisits the eternal battle between personal ambitions and higher causes: While Janus and Mang Isyo both gave up romantic trysts to embark on nobler quests, some of their fellow mystics decided to abandon a former ally’s distress call in order to protect private interests.

The production is Pinoy through and through in its stark depiction of Christmastime—an extended tableau of karaoke songs, empty beer bottles and flashy parols defying the ominous threat of dark forces. It gives tribute to the resilient families who somehow manage to make merry despite the countless calamities that throttle the country each year.

Despite Guelan Luarca’s succinct direction, the staging feels a bit too expository in some scenes. Moreover, a few characters like Mrs. Ludinia and her sidekick suffer from lack of development. These are aptly compensated for by Delphine Buencamino’s fluid choreography, which catapults the audience from the sprawling chaos of Manila to the gripping terror of Janus’ nightmares.

Set designer Gwyn Guanzon, meanwhile, transforms the intimate space of the Ateneo Black Box Theater into an archetypal bahay na bato, replete with cobblestoned floors, capiz windows and paneled doors that mark the boundary between two dimensions—
one mundane and familiar, another accessed only by elemental beings.

“Janus Silang 2” ends with our protagonist finally unleashing his dormant abilities and finding himself transported back to the time when his parents were still alive. In the same way that he is given a chance to rewrite history, we are also given a chance to rediscover our roots, to appreciate a culture that is truly and uniquely Filipino. —CONTRIBUTED