How do you deconstruct an Hermès store? | Inquirer Lifestyle ❮ ❯ 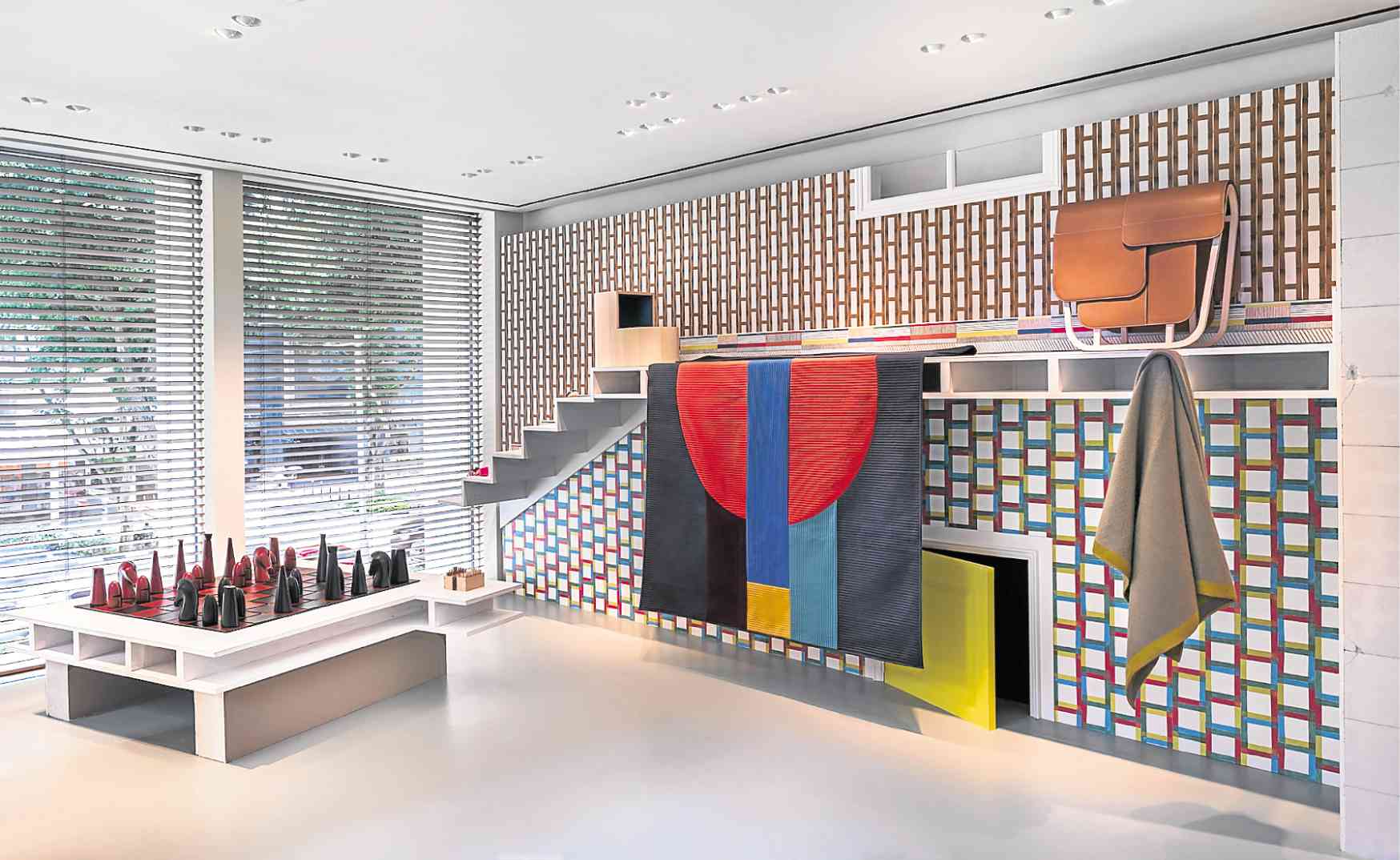 How do you deconstruct an Hermès store?

SINGAPORE—“Rigor and fantasy,” “functionality and beauty” are phrases offered to describe Hermès’ home universe under its new artistic direction.

As one steps into the elevator of the Hermès flagship boutique here (Liat Tower, 541 Orchard Road), its walls and floor covered in the vivid graphic prints of the wallpapers from the 2017 home collection, it’s easy to feel the whimsy being talked about.

The fantastical experience on the lift, however, is just a preview of what awaits on the shop’s upper floors—the ongoing installation exhibit called “Through The Walls.”

It is a deconstructed and playful presentation of the French luxury house’s home universe. It’s the first of its kind in Asia. (It runs until Oct. 29.)

The stairwell leading to the fourth floor, for instance, has 10 overlapping layers of Hermès wallpapers, ripped and peeled in random sections, such that the passageway becomes a happy mess of clashing prints and patterns.

The fantasy serves as a counterpoint to the rigor employed in the furniture collection, explains Charlotte Macaux Perelman, one-half of the home line’s artistic directors.

Macaux Perelman, an architect, and Alexis Fabry, a publisher, were hired three years ago to helm Hermès Maison’s artistic studio, to much curiosity owing to their rather unlikely professional backgrounds.

“I guess [Hermès CEO] Axel and [chief artistic director] Pierre-Alexis Dumas came to me because of my background, because in the end the scale doesn’t matter,” says Macaux Perelman, who built a name in hotel and restaurant projects.

“It’s a matter of how you approach a project,” she adds. “For me what’s important in architecture is the sense of volume and the space… Each project has its own meaning and it’s the same here. Is this object the right object for Hermès? How important will it be at Hermès in the larger scale altogether?”

Her background, though, is quite evident in the Singapore exhibit: It takes inspiration from the “anarchitecture” of Gordon Matta-Clark, a New York architect in the 1970s who dissected and sectioned buildings as in situ artworks.

Like Matta-Clark, “We wanted to destroy the store,” she told the media in jest at the exhibit preview, as she explained the cross-sections of concrete covered with wallpaper—“wrapping architecture,” she called them. “We conveyed it with broken pieces, just to show a clean design with clean wallpaper, which isn’t just a décor but part of the architecture.”

In her own welcome remarks, Hermès Maison managing director Helène Dubrule quoted Jean-Louis Dumas, former chair of the Hermès group, to underscore the house’s long heritage of creating functional and beautiful objects: “We craft objects with sense for people who have senses.”

Under Macaux Perelman and Fabry, the installation brings together rigor and fantasy, “two values that are very opposite in the real world,” Dubrule said. “This is beyond the real world.”

Coming into Hermès with Fabry, a longtime friend she hadn’t worked with before their joint hiring, Macaux Perelman says they were clear “that we’re not here to make a big change about anything. We’re just here to continue what has been done, for things to carry the same values.”

She adds in haste, “But I think we’re moving forward. The wallpapers graphically are so different from what have been done. It’s probably more personal than what has been done.”

She and Fabry make decisions together, Macaux Perelman says. “We believe in the same values. It’s nice because we have different eyes: As an architect, I see proportion, things in my everyday work… It’s important for us that it’s very homogenous, a very clean sense of the collection. We [believe] that obviously the furniture should be more rigorous and the textiles more fantasy. It’s very Hermès—you can’t say that it’s all rigorous or all crazy fantasy.”

While the spirit of the wallpapers and textiles are clear, the rigor involved in their work is less obvious at first glance. It mostly goes into the furniture, Macaux Perelman says.

“It’s very important to explore new know-how,” she says in explaining the idea behind a cast bronze table in the collection, as an example. It was designed with the British studio of Barber & Osgerby.

“Bronze is a material that’s not so much explored and uses a very antique technique. We went to a family that has been doing this for many years. Bronze has many imperfections. With sculpture you can hide that, but with a design that’s so clean on the surface, that’s very hard to do. The process is very complicated.

“The rigor is in the design and the process of making the furniture. We always go to the best manufacturer, the best craftsmen to do the pieces. It’s the leather that we can do in-house.”

On a personal level, she feels affinity to the process, owing to her profession. “I like going to the job site, and working close to the people who make the project. At Hermès I feel very close to the craftsmen and how they make things.”

Unlike two years ago, when they wanted an equal balance of leather with other materials, she and Fabry decided not to use as much leather—Hermes’ heritage material—for the current collection.

In designing the Lien d’Hermès, for instance, “Can an object not have leather at Hermès?” she asks rhetorically. “We decided to reduce the leather, to use it just like a link, to remind us of Hermès’ métier [as saddler and maker of] the harness of the horse.”

The result was a very clean, streamlined collection where thin strips of hide “reveal more than mask” the objects, as the skins clothe crystal vases or lacquered boxes.

“It’s the reverse of ‘only leather,’” she points out. “Only Hermès can do that because it’s in the DNA of the house. We didn’t reinvent anything, we just reinterpreted the code, the details.”

For Karumi, a trio of chairs made of bamboo, which is part of the exhibit, the house tapped Pritzker laureate Alvaro Siza. Hermès likes to collaborate with architects because they have “a different relationship with time [unlike] designers [who] respond to the moment,” says Macaux Perelman.

Hermès objects are about longevity and timelessness, like works of architecture.

“Siza came up with a very simple drawing, and we had a hard time for two years to find the right manufacturer. We found master craftsmen in Japan who invented this technique in bamboo” combined with carbon fiber, which makes the bamboo very strong, but extremely lightweight.

“We call it techno-artisanal, which [combines traditional] craft and technology.”

When asked if the objects she’s creating now have the ability to change the world like a monumental piece of architecture, Macaux Perelman demurs: She has no grand ideas of the work that she does.

“We try to do it correctly and properly the best we can for our clients,” she says. “We’re not changing the world, but hopefully we’re making nice objects.”

Hermès Maison in the Philippines is at Greenbelt 3, Ayala Center, Makati.