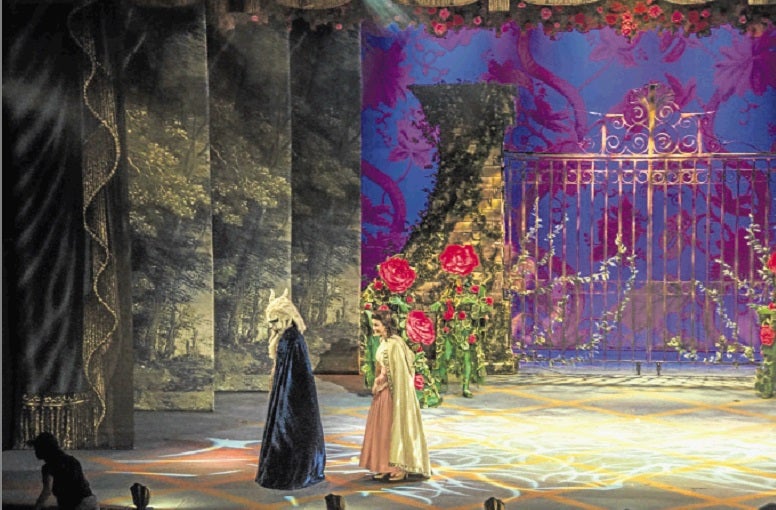 Joey Mendoza: “I imagined a lot how Charles Perrault would have liked this done. It was fun using old-fashioned Baroque elements like trompe l’oeil, verdure tapestries and false perspectives.”—PHOTO FROM REPERTORY PHILIPPINES

Joey Mendoza: Meet the set designer behind Rep’s ‘Beauty and the Beast’

When the curtains rose at the RCBC Plaza Theater for the play “Full Gallop” in 2014, a one-woman show starring Cherie Gil, the audience gasped in admiration and applauded although there was yet no one on stage.

“Joey Mendoza’s scenery for ‘Full Gallop,’ a play about former Vogue editor-in-chief Diana Vreeland after she had been axed from the magazine, received applause for every single show in its concluded run,” reported Walter Ang in the April 12, 2014 issue of the Inquirer.

And to think that was not even the favorite stage design of the designer, New York-based José Ramon (Joey) Mendoza.

“I Joined a workshop to pass the summer,” he recalls. “I met many of the friends I am still close to this day. I started out like most, thinking my love of theater was acting. It took a long time to realize my craft was design. I grew up in a family of artists and was surrounded by architecture and modernism.”

Indeed, there is talent on both sides of the family. Mendoza’s father and brother, Toti and Tonichi, respectively, are known architects and interior designers. His sister Tessa is a visual artist. His mother Maribel Gonzalez used to act in Fr. James Reuter’s plays at the Ateneo Graduate School in Padre Faura, Manila, until she got married and became pregnant every year.

And Joey’s maternal grandmother was Delfina Gonzalez, first lady of the Spanish- speaking stage in Manila.

Mendoza started at Repertory Philippines as an actor, then switched to set design when he moved to New York and worked with the famous Ma-Yi Theater Company. Broadway designer Loy Arcenas (now a director in Manila) encouraged him to take design seriously, and he took a course in Parsons School of Design. He now teaches at Fordham College at Lincoln Center.

His three favorite design outputs are for “Anon(ymous),” “Little Women” and “Into the Woods.”

The first play, by Naomi Lizuka, was also his first design work for Fordham at Lincoln Center and was a retelling of Homer’s “The Odyssey”—“episodic and epic in scale,” as Mendoza recalls it.

“Little Women” was his first for Rep: “Director Menchu Lauchengo-Yulo and I immersed ourselves in the material obsessively for many months. It was a rare and ideal collaboration and artistically gratifying.”

Stephen Sondheim’s “Into the Woods” was a production by a small community theater, with a shoestring budget “but most gratifying,” says Mendoza.

“It’s tricky to do ‘Beauty’ particularly because the motion picture is still fresh in people’s minds,” says the set designer. “The original 19th-century French novel is the version the musical adapted. It was a no-brainer. I imagined a lot how Charles Perrault would have liked this done. It was fun using old-fashioned Baroque elements like trompe l’oeil, verdure tapestries and false perspectives—how often does one have this chance?”

As for “Blackbird,” which was about sexual abuse, “Topper Fabregas and I wanted to set David Harrower’s (play) in a glass box (house). It’s a story about two people with a horrible past. The challenge was to turn this rather mundane setting into something theatrical.”

Theater people who have influenced Mendoza the most include Loy Arcenas (“definitely a big influence, I appreciate his restraint most of all”) ; Matthew Maguire of Fordham University (“He believed in me more than I did myself”); and Yulo (“whose passion and tenacity are what I long for in collaboration”).

And there are his students at Fordham, “who remind me that theater is dynamic and there is always something new to learn.” —CONTRIBUTED