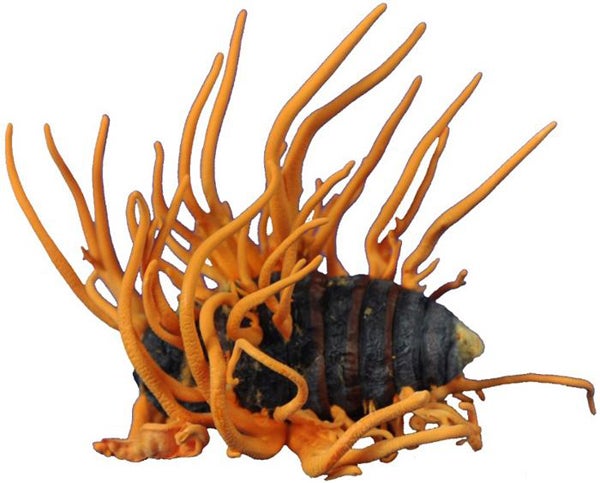 Strains of Cordyceps militaris grow on a silkworm pupa. The fungus has been found to contain chemicals that carry anti-cancer benefits. Photo provided to China Daily

The scientists found there was an interaction between two anti-cancer compounds in the fungus cordyceps militaris.

The first, cordycepin, was noted in cordyceps militaris in 1950, but how it interacted remained unknown. The second, pentostatin, was first identified from a bacterium and was developed as a commercial drug to treat leukemia and cancers in the 1990s.

“For the first time, we decoded the biosynthesis mechanism of cordycepin in the fungus and during the research we unexpectedly discovered pentostatin,” said Wang Chengshu, head of the research team at the Institute of Plant Physiology and Ecology, a branch of the Shanghai Institutes for Biological Sciences of the Chinese Academy of Sciences.

“These two compounds coexist in fungal cells in the form of a protector and protege — that is to say, cordycepin is synthesised with the coupled production of pentostatin to protect the stability of the former,” he said.

Their research also showed that the fungus initiates a detoxification process when the cordycepin in the body reaches an excessively high level, which can be toxic.

“It reminds us that excessive intake of the fungus may not be healthful,” Wang said.

A paper about the team’s findings after nearly eight years of research was published on the website of the international journal Cell Chemical Biology on Thursday.

Cordyceps militaris, bright orange-yellow mushrooms sold as a fresh supplement for soups and stews, is a much more affordable alternative to caterpillar fungus.

“However, in the research, we’ve proved that neither of the compounds is produced in caterpillar fungus,” Wang said.

Cordyceps fungi are popular in China for its widely believed immunity-enhancing and energy-strengthening properties. Their uses in medical treatment date back to the Compendium of Materia Medica, a book widely deemed the bible of traditional Chinese medicine written in the Ming Dynasty (1368-1644).

“There have been long-running arguments as to whether such fungi are anti-bacterial or anti-cancer, and people use them based on experience in most cases. It’s a major advance that our team scientifically proved that cordyceps militaris really carries such properties,” said Guo Jinhua, Party chief of the institute.