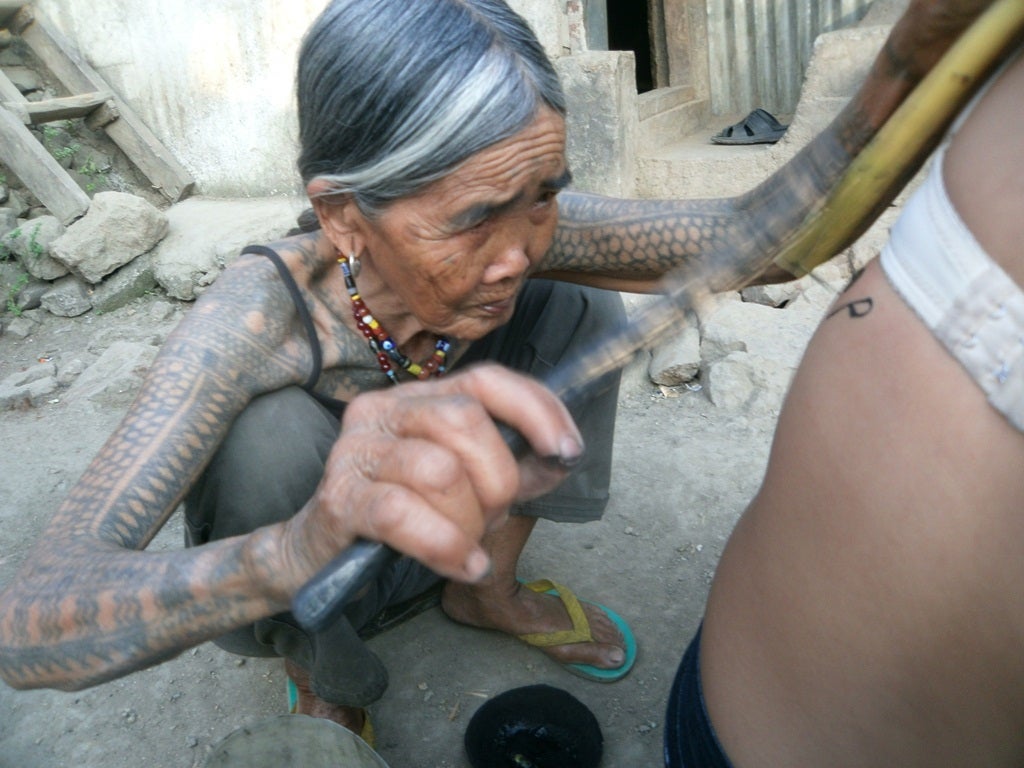 Apo Whang-od behind the ink and lemon thorns

Everybody knows her as the last “mambabatok” or traditional tattoo artist of the Butbut tribe in Buscalan, Kalinga, a province in northern Philippines.

Ever since Kara David featured her in the documentary show i-Witness, she’s already been in the consciousness not only of Filipinos but also of people from other nations who are particularly interested in tattoos and the art of tattooing.

And not only once had she been the talk of the town since then. A few years ago, there had been a clamor for her to be declared a national artist. Also not long ago, she became known internationally when she was featured in an art exhibit in Canada.

Recently, the internet was once again abuzz when she participated in a tattoo festival in Manila together with her grand niece, who is also a tattoo artist. Netizens were quick to express their opinion about her participation in the said event. Some were glad to have seen her in the city and be tattooed by her but some expressed worry and dismay that the centenarian might have been a little bit exploited.

But who really is Apo Whang-od behind all these discussions? A few years ago, this writer travelled to Kalinga province and got to be hosted by the famous “mambabatok” in her humble home.

When not tattooing, Apo Whang-od is busy taking care of her native pigs and chickens, which freely roam around their tribe. She feeds them at least twice a day.

Because it is a mountainous area, farming and raising livestock are the major sources of livelihood of the people of Butbut. Women are also into making hand-woven textiles and colorful beaded jewelry.

Although Apo Whang-od doesn’t have a family of her own, she takes care of her other relatives and is actually very motherly. There’s a dirty kitchen adjacent to her house where she cooks using wood fire.

In recent years, people from all over the world started flocking to Buscalan to get a tattoo from Apo Whang-od. There are no hotels in the tribe so tourists are left with no choice but to stay with the locals. Apo Whang-od’s house is also open for homestays.

Apo Whang-od’s abode is very simple. In her room, there is a “banig” or handwoven sleeping mat and a few pillows which guests can use. Portraits of her which were sent by tourists who previously visited her hang on the walls.

Aside from tattooing and looking after her animals, Apo Whang-od is also musically-inclined. Here she is pictured playing the nose flute at the “silong” (basement) of her house. For some reason, she loves playing sad music.

While people are interested about Apo Whang-od and the art of traditional tattooing which she is famous for, it is also important to note that there’s more to the woman than just charcoal ink and lemon thorns.

Important things to know before going to Kalinga to get a tattoo from Apo Whang-od:

It’s quite a challenge to get to Butbut tribe in Tinglayan village, Kalinga province. It requires long bus, jeepney and habal-habal rides and some trekking. Come prepared.

Apo Whang-od and the people in her tribe do not speak English or Filipino so it would be best to get a guide from Tabuk or Buscalan who speaks their Kalinga dialect.

There’s  poor cellphone signal in the area but keep your phones and cameras charged because the sceneries are quite postcard-ready.

Since the Butbut tribe is very remote, you might want to bring some treats to the tribespeople. The older ones  would appreciate a box of match or two while the children would love some candies or chocolates.