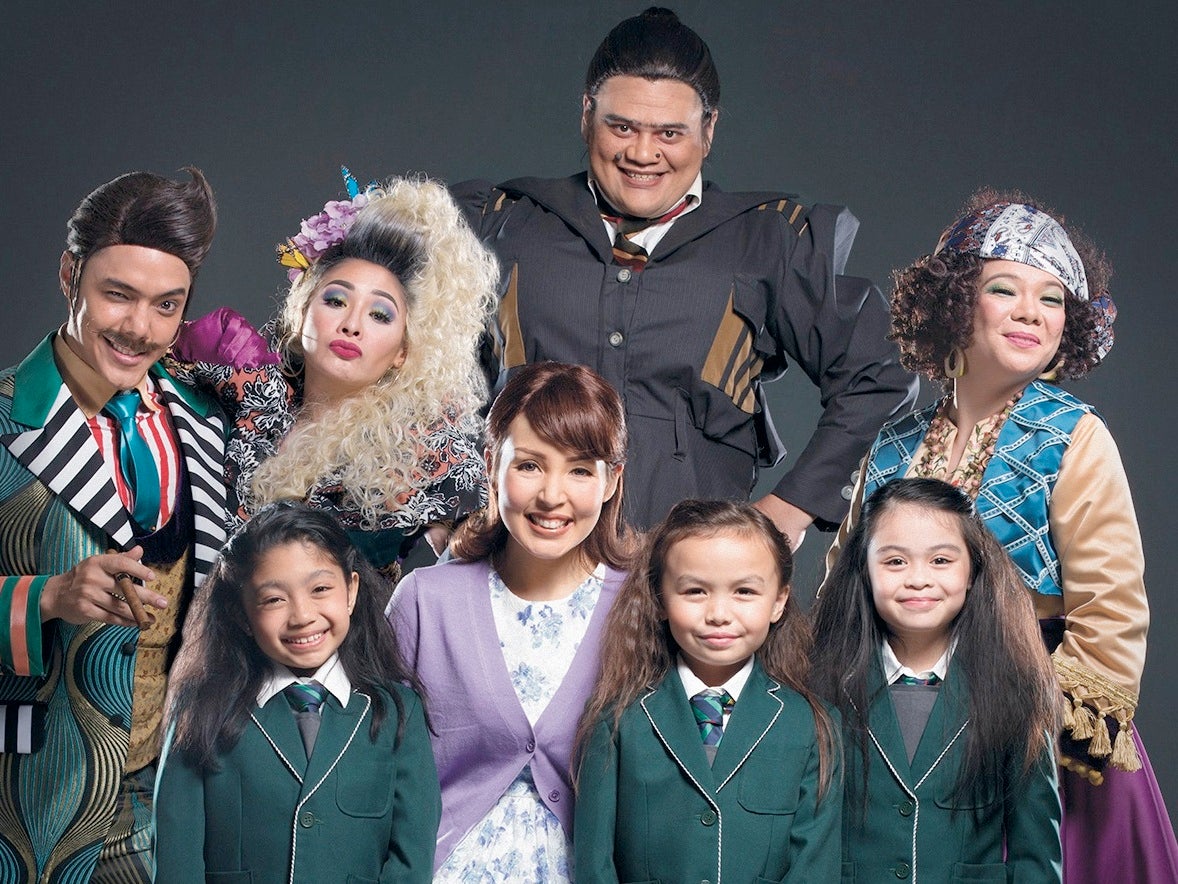 19 kids in ‘Matilda the Musical’: Behold ‘the future of Philippine theater’

At a time when people in power choose to bully, rather than listen, to those who don’t agree with them, children can best be reminded that even if they are young and small, they can stand up and fight for what is right.

Such is the premise of Atlantis Theatrical Entertainment Group’s staging of the hit musical “Matilda,” which is based on British novelist Roald Dahl’s 1988 children’s book of the same title.

“Matilda the Musical,” directed by Bobby Garcia, opens Nov. 10 at the Meralco Theater in Pasig City.

Despite having neglectful and uncaring parents, the play’s titular character grows up to be a kind and intelligent daughter, with psychokinetic powers to boot. But as if her childhood wasn’t rough enough, Matilda is sent by her parents (played by Joaquin Valdes and Carla Guevara-Laforteza) to a school run by the mean headmistress Miss Trunchbull (played by Jamie Wilson), who hates children so much that she can always find a creative way to punish them for not following her rules.

Esang de Torres (who plays Matilda, alternating with Felicity Kyle Napuli and Uma Naomi Martin) says that the musical can serve as a reminder to children like her that they need not be helpless against bullying. “Like in the lyrics of the song (‘Naughty’)—‘Even if you’re little, you can do a lot. Mustn’t let a little thing like ‘little’ stop you,’” she says.

De Torres, 10, debuted as Little Cosette in the Manila run of “Les Miserables” last year, and has also appeared on ABS-CBN’s “The Voice.”

Cris Villonco, who plays the timid and always-pushed-around Miss Honey, says she herself was bullied for being “different” during her childhood. But those undergoing the same experience, especially women and children, can learn from the play that there is always someone who’d be more than willing to stand by their side, she adds. “You’re never alone. There’s always going to be somebody who will—not save you—but give you a little push that will make you a little stronger.”

Wilson’s character might be the biggest and baddest meanie, but he notes that Miss Trunchbull is a representation to children that they can stand up to bullies no matter their shape or size.

“Even if you’re little, you can change your own circumstances. You can pursue your dreams without anybody telling you that you can’t do it,” he says.

Apart from being a play that encourages children to speak up for what is right, “Matilda” is also a showcase of what Guevara-Laforteza calls “the future of Philippine theater”—19 children in the cast (two sets of eight for the ensemble and the three lead actresses) who are expected to perform “intense numbers.”

This early, Villonco is already all praises for the young cast members, saying that if she were around their age, the kids would have easily bested her.

“I would be nowhere near these kids,” she says. “Sometimes we’re like, ‘Are these kids going to get this choreography? Because this is quite intense!’ And they have to be gung-ho about it. And you know what? They know it. They love to do it and they do it again and again. They’re really exceptional.”

Wilson says that compared to them, children today have more opportunities and resources at their disposal to nurture and develop their talents—something that the previous generation, and to some extent, Matilda in the story, didn’t have.

Hence, he offers the advice that if young people have the talent, the tools and the means to effect change, “do something good with it… Instead of spreading dissent and bad stuff, share something positive that would unify the people,” he says.