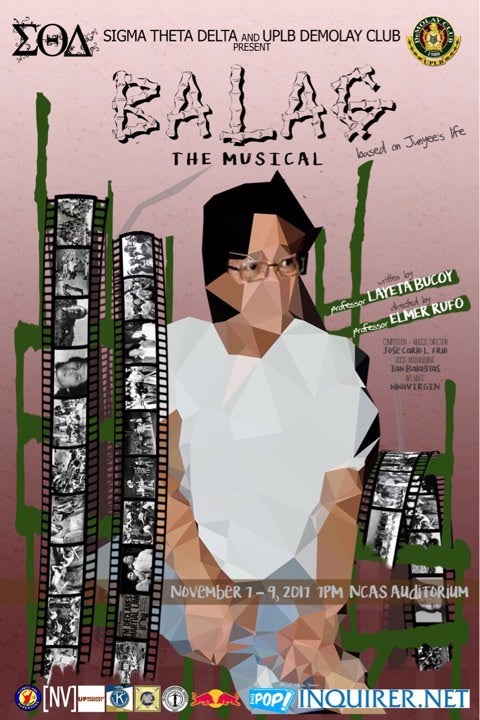 He builds a balag but it’s no ordinary trellis where climbing plants can grow. Instead, it becomes a visual art of protest.

BALAG, the Musical is based on the life story of  installation artist, Junyee. It recounts the struggles of the protagonist at the Chinese-owned funeral parlor where he works as a make-up artist.

This is his way to survive at the time when his father becomes unsupportive of Junyee’s dream to study Fine  Arts.

At the University of the Philippines in Diliman, Junyee builds BALAG, an installation art made of bamboos, where anyone can hang anything. BALAG becomes a visual art of protest as individuals hang different materials that express their sentiments, emotions and experiences triggered by Martial Law.

In the romantic vein, BALAG relives Junyee’s love story with Tess, whom he is now married to, and his moments with Pilar who is madly in love with him, but whom Junyee can only love as a friend.

The musical play, presented by Sigma Theta Delta and UPLB Demolay Club, opened November 7 and will run until November 9 at 7 p.m. in the NCAS Auditorium, University of the Philippines Los Banos, Laguna.

It was written by Layeta Bucoy and directed by Elmer Rufo.

Junyee at 75: From mortuary assistant to the Philippines’ ‘orig’ installation artist