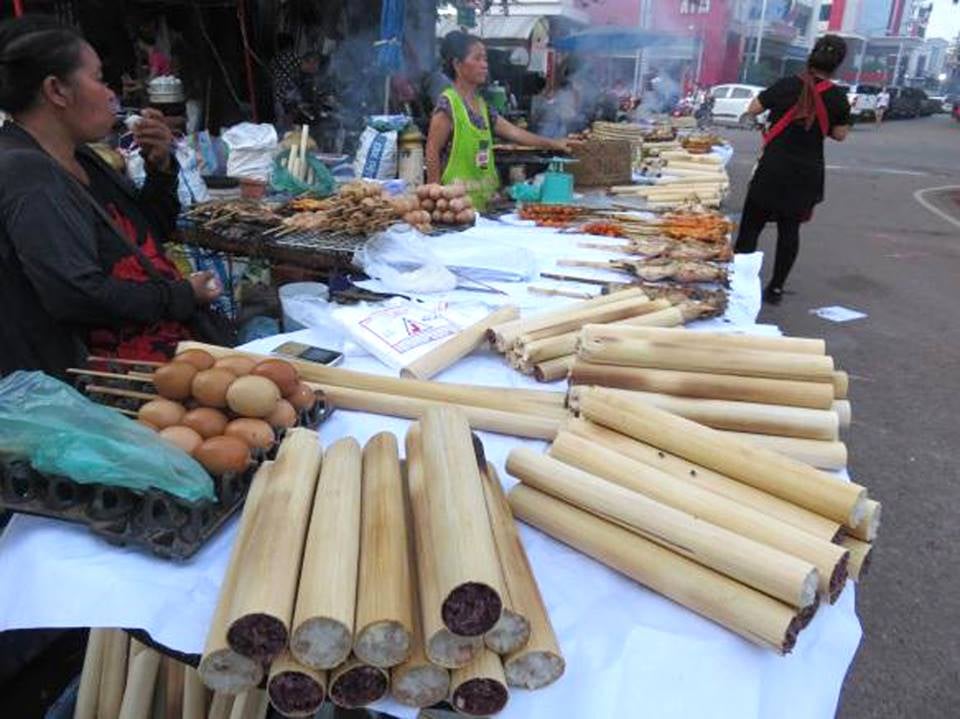 Khaolam: making the most of newly harvested rice

In the cool season, people in rural areas would make fires and sit around them to get warm and chat together.

When people are engaged in a good conversation, everyone wants to do something so they can continue talking for longer. Some years ago people hit upon the idea of making khaolam because the newly harvested rice gave off such a pleasant smell. So khaolam was invented as a dessert and a snack.

As it was also the end of the rainy season, it was easy to find young bamboo stems into which the rice could be packed.

Khaolam is sticky rice that is cooked in thin, supple stems of bamboo. There are several stories as to its origins depending on the region. While it’s not part of a main meal, it is dear to people’s hearts.

When I was a child living in Vientiane province, I remember that we could not find khaolam to eat every day as is the case now.

In those days khaolam was only available during the wet season rice harvest and also when a woman gave birth.

Based on longstanding traditions, there are many foods that new mothers should not eat for at least three months to a year, as it is believed they will affect the mother’s health.

Some young mothers are very wary about the food they eat and will only consume certain kinds of fish caught in the river, free range chickens, and vegetables grown on their farms.

For them, khaolam was one of the permitted food items. It contained salt but no pork, beans or coconut, which they abstained from after childbirth.

There are many kinds of bamboo but the “maiphai ban” species is the only one used to make khaolam because it is very thin and is easy to peel after it’s been cooked, revealing the steamed rice inside.

Any kind of sticky rice is acceptable but it’s best to use a really soft variety.

Newly harvested rice can be cooked after being soaked in water for two hours but old rice must be soaked for four hours before cooking.

Khaolam is eaten as a sweet or snack.

Back in my childhood, in the afternoons when the sun was not too hot, the men would cut some young bamboo and the women would soak the rice.

The rice was usually put on the fire in the evening after dinner or in the morning while breakfast was being cooked because the weather was quite cool and people wanted to sit near the fire. This meant it was easy to keep an eye on the khaolam so that it didn’t burn.

All parents can cook khaolam but they have different methods.

Some of the older men were very good at storytelling and would tell us a lot of stories about their childhood, wartime, and tales that had roots in their fertile imagination.

My village was quite small but we had a strong sense of unity. People didn’t think about trading. Everything they had they ate or shared, or sometimes exchanged for other goods.

This is vastly different from life today when sharing has gone out of style because people are quite busy and more concerned about their work. Unfortunately this is killing the unity that bound communities in the past. Most of the things people do today are intended to earn them some money.

Fortunately khaolam is still readily available at any time of the year along roadsides and in markets, and especially during the boat racing, rocket and That Luang festivals when it is consumed in large quantities.