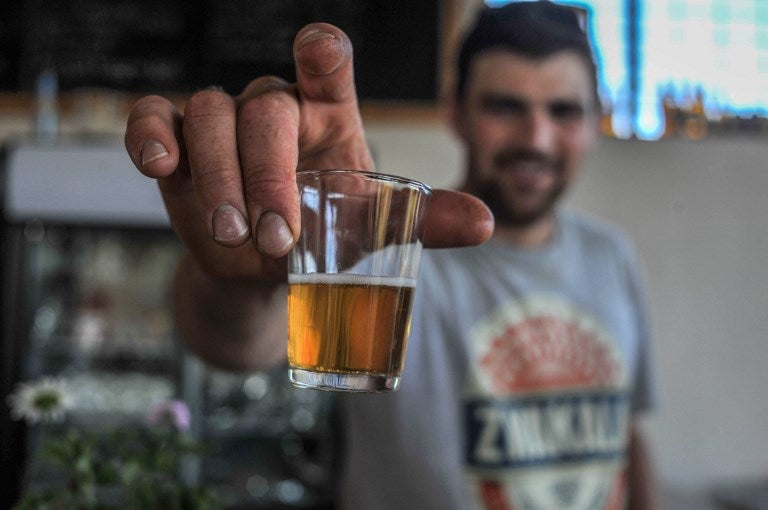 Luca Tooley founder of Zwakala craft beer made in Limpopo shows his award winning beer at the Zwakala brewery on October 19, 2017 in Haenertsburg, South Africa. More than four out of five beers sold in the rainbow nation are made by SAB, but a growing number of craft brewers are pushing to put their creations into the hands of drinkers in South Africa and beyond. AFP

“Hopefully within the next two to three weeks we’ll be sending a full pallet of beer over,” he added as he stood outside his brewhouse, overlooking the river that provides the crystal-clear water for his ales.

South Africa is renowned worldwide for its wine exports but has fallen far behind the craze for craft beers that came of age in the United States before exploding in Britain, Germany and elsewhere.

The beer market is dominated by South African Breweries (SAB) which is better known for its affordable lagers that are popular in poorer townships.

More than four out of five beers sold in the rainbow nation are made by SAB, but a growing number of craft brewers are pushing to put their creations into the hands of drinkers in South Africa and beyond.

Market analysts Grand View Research estimates the global craft ale market could be worth $500 billion by 2025 — six times more than in 2015.

Zwakala is finalising a deal with South African-run spicy chicken giant Nando’s to provide their US restaurants with hoppy hand-made brews — a major breakthrough for their fledgling operation.

“We’re also looking to export our beer to Zimbabwe and to Zambia and China,” said Tooley, 28. “Export is going to be quite a big market soon.”

As South African craft beer takes the first steps to establish itself abroad, hand-made ales are surging in popularity at home, becoming a niche premium market.

Currently just three percent of beers sold come from craft brewers but that figure has more than tripled since 2013 and is expected to grow to 10 percent by 2022, according to industry statistics. In the US, craft beer has reached 21 percent market share.

One key to securing domestic success will be tapping into the booming black middle class.

“I’ve had moments at festivals where a person would say ‘But you’re black, what do you know about beer?’ I’m thick-skinned.”

Despite the challenges, his dream is to develop a beer that will appeal to black professionals like himself who have been aggressively marketed premium products like champagne but have had little exposure to craft ale.

Local brewers are also seeking to attract beer aficionados and tourists with their quirky brewery concepts.

Johannesburg is home to Africa’s first airport brewery which is run by the Skosana family, and opened its doors to passengers in 2015.

The on-site brewery, within sight of passing aircraft, makes 3,000 litres of craft beers a month that include porters, IPAs, blondes and pilsners.

“Even the landlord was excited ahead of the opening,” said the brewery’s chairman, Brian Skosana, 57.

The Zwakala brewery in Limpopo is also a tourist hotspot and sits in the heart of a region popular with visitors from home and abroad.

Greta Edwards, 67, was brought to the brewery by her husband to celebrate her birthday.

“It’s very much a draw for overseas visitors. It’s like tasting French champagne against sparkling wine,” she said.

But all that glisters is not gold, warned Lucy Corne who runs the Brewmistress blog that chronicles the highs and lows of the South African beer industry.

“There are approximately 200 breweries in South Africa now, and if I walked into a store with beers from all of them, I would probably risk my money on a maximum 50 of them,” she said.

Major brewers also threaten to muscle in on the untapped market.

Not to be outdone, SAB has developed its own range of craft beers.

At one of its giant brewing sites outside Johannesburg, brew master Warren Wiese prides himself of the trio of craft beers that he brews manually unlike their lager stablemates.

While SAB has deep pockets to experiment and develop its answer to the craft phenomenon, Corne sounded a note of caution for start-up opportunists looking to cash in.

“There are also the bandwagon jumpers who are like ‘everyone is opening a craft brewery, I’ll do the same’,” she said. “Those guys aren’t going to survive.”