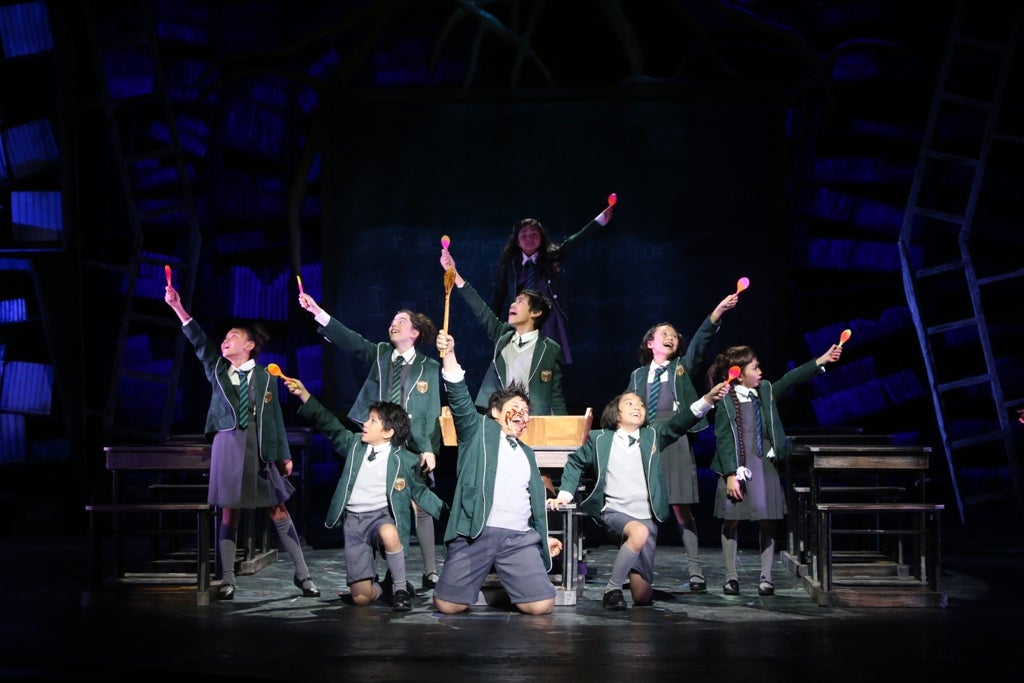 Buoyed by a cast of mostly pint-sized performers, Atlantis Theatrical Entertainment Group’s production of “Matilda The Musical”—directed by Bobby Garcia and running until Dec. 10 at Meralco Theater—packs a punch well above its weight.

The musical, based on the popular children’s book by Roald Dahl, tells the story of the eponymous gifted yet unwanted schoolgirl. Despite her uncanny intellect, she is spurned by her father who preferred her to be a boy (and keeps calling her one), and chastised by her mother for choosing books over looks.

She then attends a school run by the tyrannical headmistress Miss Trunchbull, an ex-hammer throw champion who believes that “children are maggots.” She finds solace in the company of her doting mentor Miss Honey, as well as the quaint librarian Miss Phelps.

Uma Martin pulls off a fantastic job portraying the precocious Matilda Wormwood, although she can be a tad too enthusiastic in her storytelling scenes. She ditches any semblance of saccharine sentimentality, instead making us see the protagonist for who she really is: a young girl constantly fighting for love, fairness and acceptance.

Joaquin Valdes and Carla Guevara-Laforteza both steal the show as the comedic Wormwood parents. Valdes even breaks the fourth wall with his Act II opener, “Telly,” while Guevara-Laforteza—on top of being a vivacious dumb blonde—displays her terpsichorean talents in “Loud.”

On the other hand, Cris Villonco is a breath of fresh air with her subdued depiction of the troubled Miss Honey. She stands in stark contrast to Jamie Wilson’s deliciously devilish Trunchbull, who can easily turn a classroom into a pedagogic purgatory with the flick of an eye, a sinister smile or a few choice insults.

The solid ensemble of schoolchildren rightfully cements the production’s success. Sporting impeccable British accents, the kids nail their numbers with aplomb—from the electrifying energy of “School Song” and “Revolting Children” to the quiet optimism of “When I Grow Up.”

Faust Peneyra’s design and Driscoll Otto’s lighting, meanwhile, give life to a quirky world reminiscent of “Wicked” and even the “Harry Potter” franchise. While the spiraling bookcases and effervescent colors capture the curiosity and innocence of childhood, the grim and grungy classrooms delve into our deepest, darkest nightmares.

And yet, with all its fanciful elements, the key messages conveyed in “Matilda” strike a familiar chord in today’s society. The Wormwoods’ revulsion at their daughter’s reading voracity reflects the current epidemic of smart-shaming in our midst. Likewise, Trunchbull’s corrupt power figure is juxtaposed beside Miss Honey’s supportive yet powerless character, a scenario that oftentimes plagues our beleaguered educational system.

Highlighted also is Trunchbull’s firm mantra of achieving one’s goals by strictly following the rules and staying inside the box (“Throw The Hammer”), as opposed to Matilda’s creative, quick-witted thinking, which ultimately leads to her plus-sized oppressor’s comeuppance.

The issue of bullying is the heart and soul of the show, reverberating with every scene and taking root within a child’s very foundations. While its long-term effects are manifested in Miss Honey’s helplessness and deflated self-esteem, Matilda refuses to back down. Thus, by standing up not only for herself but also for her equally tormented schoolmates, she becomes an exemplar for bullied children everywhere.

Indeed, leaving the theater, one cannot help but wonder how it is that we have managed to let present-day bullies run our show, and how it is that we all have much to learn from children—no matter how “revolting” they may be. —CONTRIBUTED