Balag of BALAG: the Installation Art in a Musical | Inquirer Lifestyle ❮ ❯ 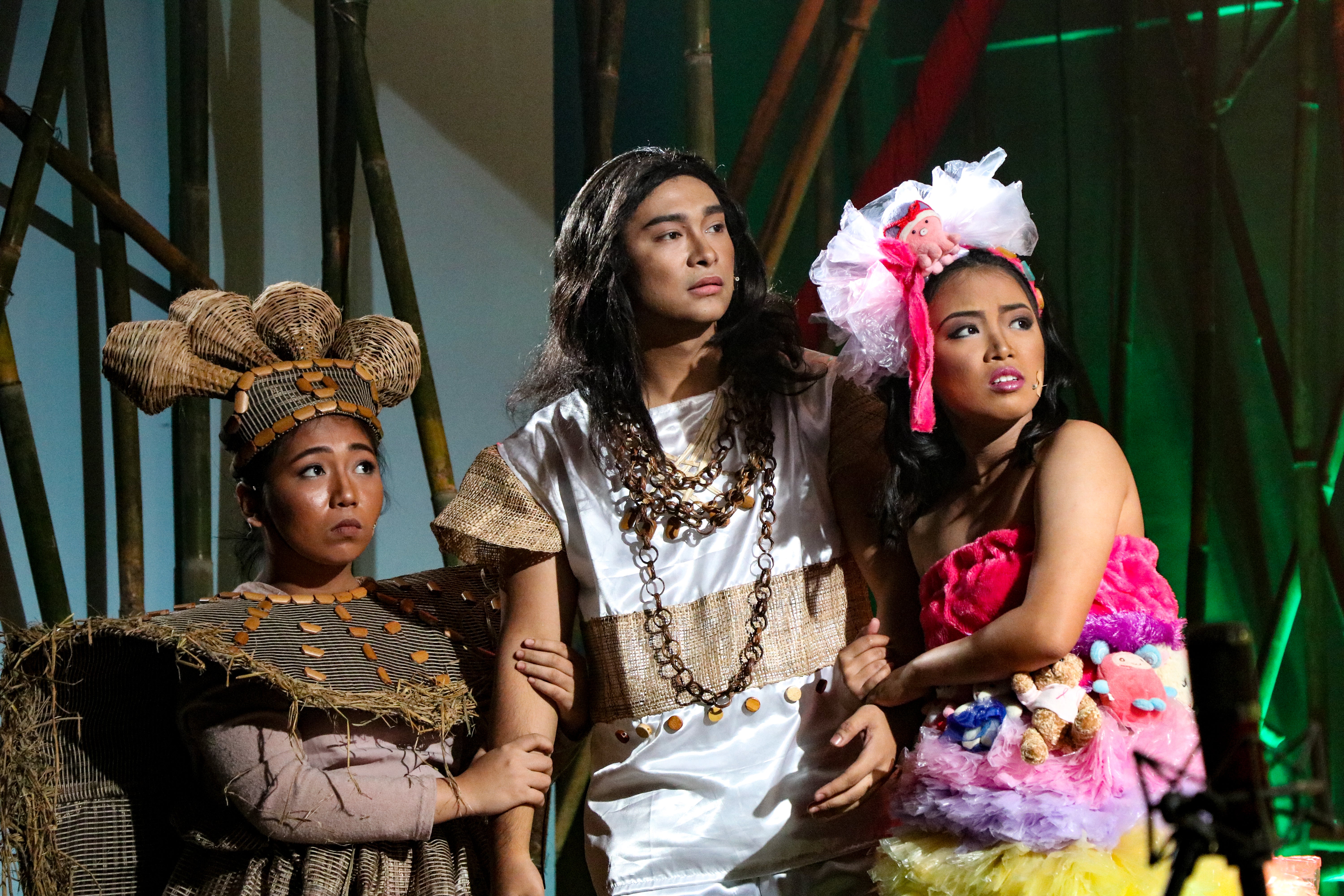 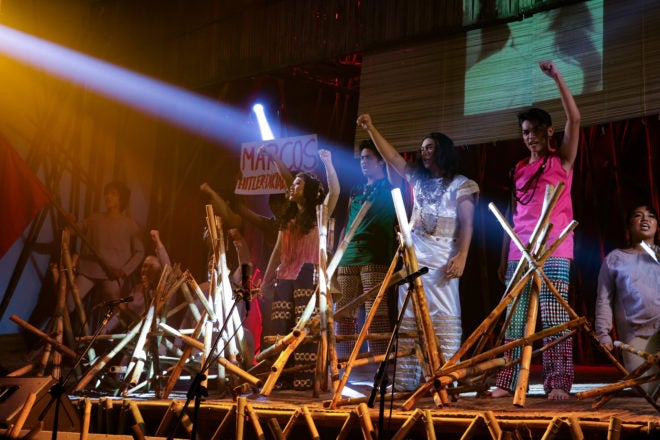 At first, the larger-than-life crisscrossed balag that framed the audiences as they walked inside the auditorium were for aesthetics. But the moment the stage design and the spatial intervention in the audience area were exposed, and the narrative of the play unfolded, through dialogue, music, and movement, balag became conceptual. It was the super-structure, both material and abstract, of balag that contained the sub-structures of ambition, struggles, protest, love, death, immersion, and representation.

For this conceptual rendering, BALAG–written by Layeta Bucoy, directed by Elmer Rufo, music and live band by Nina Virgin, and presented by Sigma Theta Delta and UPLB Demolay Club– had an imposing presence.

Ambition that cuts the paternal cord

On his 17th birthday, Junyee (Rafael Canillas) excitedly tells his father, Luis (Gio Maningas), his ambition of pursuing a career in Fine Arts. Wanting his son to take a business-related course, Luis is enraged by Junyee’s decision, and warns him of cutting the father and son tie. Seeing the implications of the situation, Felisa (Raia Salvador), pleads her husband to retract his words, but to no avail. Junyee leaves home. 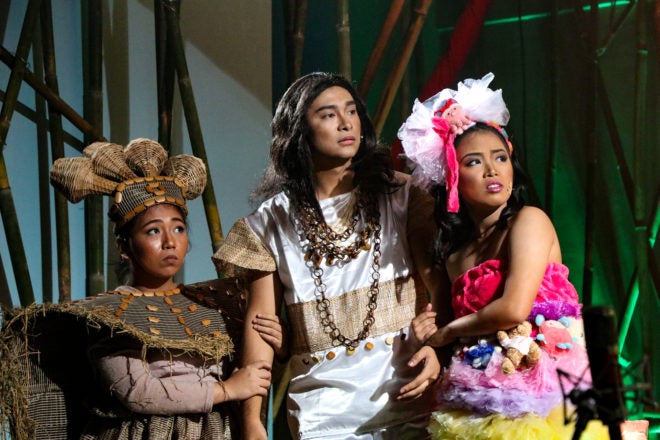 Struggles at the funeral parlor

Junyee renders mortuary services to survive. At the funeral parlor owned by the Chinese, Mr. Chua (Gab Carreon), Junyee gets ill. Mr. Chua is frightened by Junyee’s condition, and orders him to leave. Aided by his friend, Pilar (Anna Escobia), Junyee begs Mr. Chua to keep him. The task of persuading seems difficult for the two as Nardo (Gabriel Aldrin Mendoza) spits invectives at them. But Mr. Chua has a change of heart when Junyee tells him that he was disowned by his father. Mr. Chua finally decides that Junyee works as a make-up artist at the mortuary after seeing Junyee’s painting of his mother.

While studying at University of the Philippines Diliman as a Fine Arts student, Junyee builds Balag, an installation art protest against the prevailing Martial Law. Balag has captured the attention of multitude who hang different objects to express their sentiments against the political turmoil of the time.

Balag is a historical installation that brought to the awareness of people that art could be used as a platform for protest, and that the sentiments of the people are essential part of it. At the University of the Philippines Los Banos, Junyee distributes copies of the Collegian for his organization, Kapatirang Plebeians. At UPLB, he meets Tess (Kathleen Galula) who is applying for membership. In her reporting to Junyee, Tess bares her affection for Junyee which he reluctantly accepts for fear of making life uncomfortable for her. Tess tells Junyee that she is willing to live a difficult life as love is for the brave, unafraid to face life’s trials. Junyee retorts that love could not bear to see the loveone in pain.

The divergent views about love is united by the matrimonial cord.

Deaths that haunt the matrimonial bed

Junyee’s matrimonial sleep is haunted by the deaths of friends, including Pilar, who were killed during Martial Law. Pilar who has unrequited love for Junyee joined the kilusan at the time when there is no hope for her to win Junyee’s affection. In a radio news, it is reported that Pilar is killed during an encounter with the military.

Pilar re-appears on stage in cold flesh to tell Junyee that he has become selfish again. The eeriness of the scene is created as Pilar seems to speak through Tess. Seeing her husband in distress, Tess comforts Junyee by reminding him of Balag he created. Tess convinces Junyee to open it again, to allow her become part of it, part of his creation, part of his life. 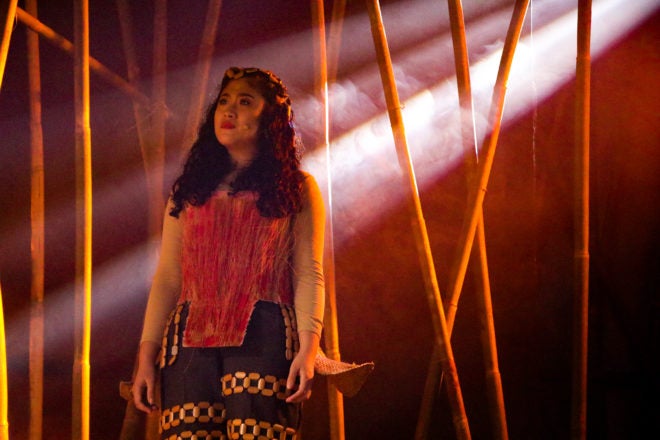 The concept of setting-up balag at the entrance of NCAS Auditorium is a foreshadowing of an immersive theater experience. It semaphores the idea that audiences will take part in the construction of the total theatrical experience. This participation is unveiled as Junyee encourages the audiences to write their sentiments on pieces of paper. which they could post on the balag surrounding them. 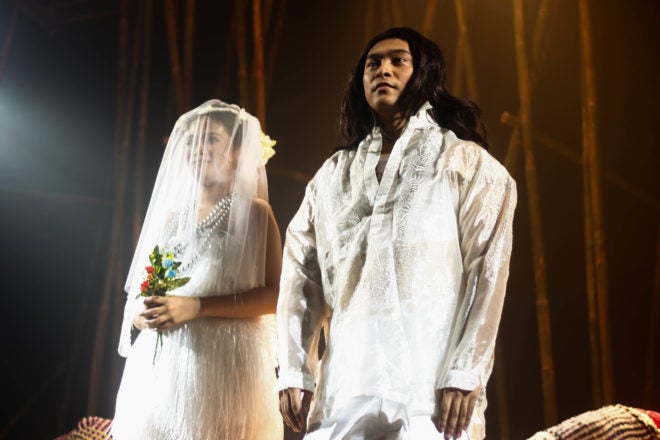 The birthday celebration of the protagonist, which is the opening scene, is made festive and colorful through the skillful manipulation of lighting and of the chorus playing non-human roles – chair, table, food, fruits, and utensils. Costumes, headdresses and hand props are installations of different materials – indigenous, plastic, recycled, rubber, and textile. Sculptural pieces are represented by installations of bamboos and pantomimic movement. Funeral parlor is simulated by filling rectangular structures made of bamboos with makeshift corpses. Changes in time and space occur in a unit set through addition of stage properties, variations of movement, as well as shifts in lighting composition.

The impact that balag had created during Martial Law had reverberated in the musical, BALAG, that re-staging has to be another theatrical structure. 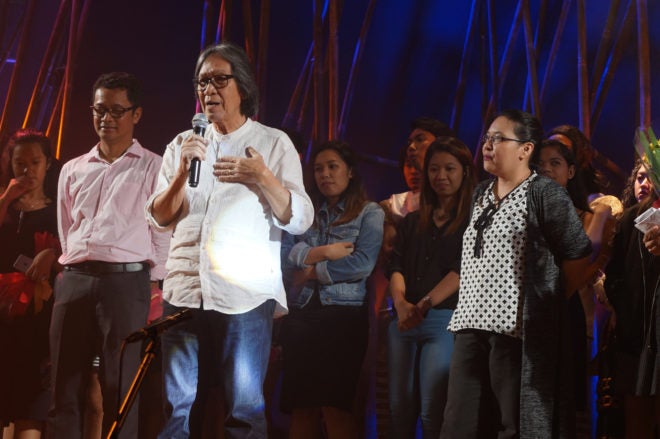