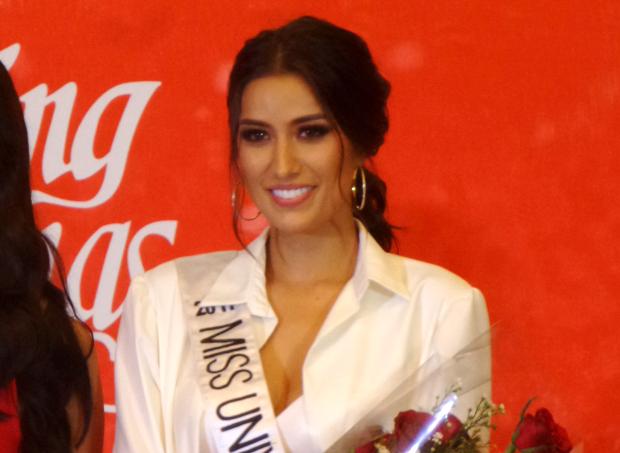 The Philippines’ Rachel Peters may not have won the Miss Universe crown, but her top 10 finish successfully sustained the country’s streak in the global pageant, which started with Venus Raj in 2010.

Demi-Leigh Nel-Peters became the second South African woman to bag the crown when she bested 91 other aspirants for the Miss Universe title in ceremonies staged at The Axis Theater of Planet Hollywood in Las Vegas on Nov. 26 (Nov. 27 in Manila) .

Her victory broke a 39-year crown drought for her country, after Margaret Gardiner became the first South African to receive the title in 1978.

Philippine bet Peters, 26, advanced to the semifinals as part of the wildcard qualifiers, along with Venezuela’s Keysi Sayago, China’s Roxette Qiu, and Jamaica’s Davina Bennett who finished third in the competition.

This year’s pageant adopted a different system in selecting the semifinalists.

The delegates were split into geographical regions — The Americas (North, Central and South) plus the Caribbean; Africa and Asia-Pacific; and Europe.

Each region had four representatives chosen based on the preliminary interviews, and the swimsuit and gown competitions.

Peters was not among the four qualifiers from the region of Africa and Asia-Pacific.

Those who qualified from the region were the candidates from Thailand, Sri Lanka, Ghana, and South Africa.

Peters, an entrepreneur who opened a coffee shop in Siargao, failed to advance further after the evening gown competition of the top 10.

But her accomplishment sustained the Philippines’ semifinal streak in the competition.

Since 2010, the country’s representatives have been called during the first cut.

In 2012, Janine Tugonon placed second to Olivia Culpo of the United States in the pageant staged in Las Vegas, while Ariella Arida finished fourth in 2013 in Russia.

Wurtzbach was one of the judges for this year’s competition.

At eight consecutive years, the Philippines currently has the longest active semifinal streak in the global competition.

Ariadna Gutierrez placed second to Wurtzbach, while Andrea Tovar finished third in the pageant’s 65th edition staged in the Philippines in January this year.

But Venezeula holds the longest semifinal streak ever recorded in the Miss Universe pageant, which ran from 1983 to 2003, and included several runner up finishes and two victories.

Peters is not expected to arrive anytime soon, said an official from the Binibining Pilipinas Charities Inc. (BPCI).

Before leaving for Las Vegas, the beauty queen already asked the national pageant organization if she could stay in the United States for a few more days after the global tilt, said Gines Enriquez, spokesperson of BPCI’s parent company, the Araneta Group.

“But she said we can tell her via Viber if we need to have her back here,” he added.

Enriquez said BPCI had no immediate plans for when Peters arrives home.

“We were hoping she would win and stay in the US longer than expected, so we did’t make any plans,” he said.

In a statement issued by the organization, BPCI chair Stella Marquez-Araneta congratulated Peters “for her phenomenal representation of the country in this year’s Miss Universe pageant.”

She added: “More than your poise and beauty, you are a cut above the rest with your grace and elegance that exemplifies a true woman of substance and an inspiring Filipina. We are proud to be a part of your journey.”

Enriquez, meanwhile, said “we’ll all try to figure out as a group” why Peters failed to advance further in the competition.

“But we know she did everything that she could. She looked amazing. Her walk in her training was spot on,” he added.

Enriquez said he believes Nel-Peters and Gonzalez advanced because they have “a strong sense of advocacy. They’re so involved with their community. And we salute them for something like that.”

He said BPCI will take the results as an opportunity to learn.

“When we do our search, it’s up to the executive committee and [Araneta] to pick the ones who we all think will make it and will be the best to represent our country,” he explained.

There are no word yet as to when the search for Binibining Pilipinas candidates will start, but he said Araneta will make an announcement soon.