Why collectors should let go, according to Ambeth | Inquirer Lifestyle 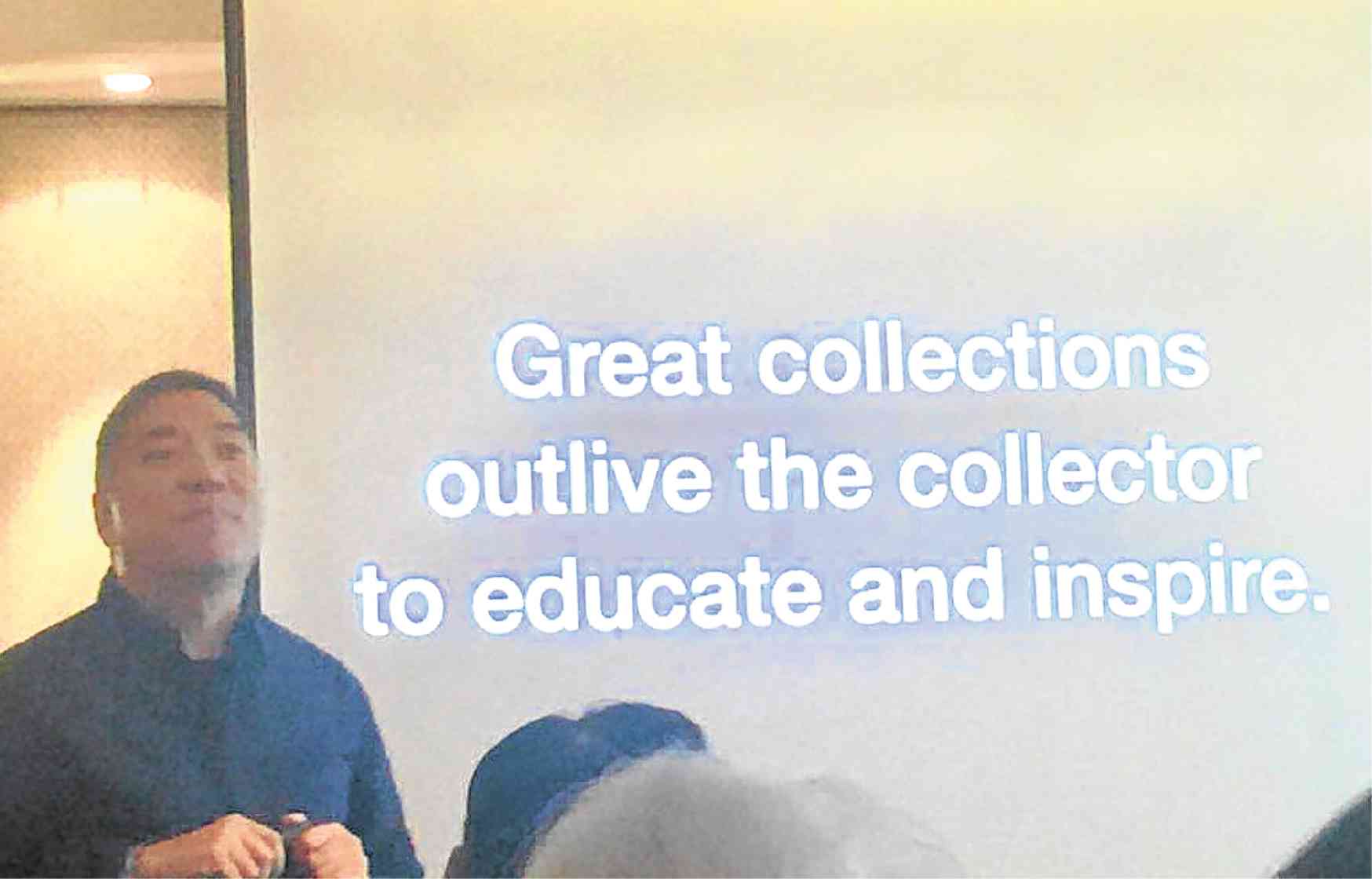 Ambeth Ocampo and his message: “Great collections outlive the collector to educate and inspire.”

Why collectors should let go, according to Ambeth

How do collectors, especially those of priceless art, let go? The more accurate question is—can they, do they ever?

In fact, many don’t; they merely allow death or penury to decide, whichever comes first. That’s for priceless art.

(When it comes to priceless bags, in my neck of the woods, I’ve seen some girl friends who find their bag collection more irresistible than men. But that’s another story.)

It would be interesting to know the answer. Therefore, the morning (as in 10 on a Sunday!) talk of Inquirer columnist and cool historian Ambeth Ocampo on art collectors—their responsibility and legacy—was too irresistible to pass up. This was on the last day of the much-talked-about antiques fair Nonesuch at Peninsula last month, organized by Lisa Periquet, Dindin Araneta, Trickie Lopa—definitely among today’s influencers (that much-overused word these days) in art. (And there’s Cedie Vargas, whose vision for Artefino is another trailblazer. Artefino, by the way, is ongoing at Power Plant, Rockwell.)

Ambeth, using a slideshow and in his naughty voice perfect for gossip and historic trivia, cited some of the best known collectors in history, from Sigmund Freud to our late dear friend, Dr. Eleuterio “Teyet” Pascual.

Freud’s collection in his London home, he said, made his clinic look more like a museum than a clinic, with its more than 2,000 museum objects.

His persistent message is that to own a collection is a responsibility, a stewardship and a challenge to leave a legacy. One’s collection must be taken care of, and passed on for the next generations to relish and to learn from.

There is a collector, he said, who “displays things” and a collector who “keeps things in his room.”

He recalled the case of a collector, from the mid-20th century, whose kin started carting off his collections in his waning days, leaving only the bed on which he lay dying.

And may we add, from recent times, an example of a collector whose kin and friends descended on his house in droves, shortly after his death, to select the priceless pieces they could get or buy, usually at a bargain.

We have yet to meet a passionate collector (and which collector isn’t?) who would willingly, methodically and with clinical objectivity, part with his hoard—in his lifetime. It’s as if collectors have this inexplicable sense of immortality; perhaps they never think they would die.

Or perhaps the act of collecting is a solitary pleasure that a collector isn’t wont to share.

I heard a friend—who’s on his way to being a collector—say that collecting is an insatiability that needs to be calibrated.

I prefer to think that the act of collecting is the art of acquiring knowledge through material things—and that knowledge needs to be shared now and tomorrow. (This doesn’t apply to designer bags, I think.)

I remember many evenings spent with Dr. Teyet Pascual idly poring over his collections—the loose pages of the Juan Luna diary one night and another night, the early-century portraits of the matriarchs of prominent families he had bought through the years and mounted to fill the ceiling of the den in his condominium—“If their families no longer wanted them, then I’d have them,” he’d often tell visitors. We truly miss this man who made us laugh and learn. (He passed away five years ago, a month before Christmas.)

Ambeth also reiterated that auctions are not the true barometer of an artwork’s value.

The inevitable question was asked Ambeth—how about you, what would you do with your collection?

The popular historian admitted candidly that, seeing the recent deaths of his collector-friends, he has instructed his sisters on what to do with his collections—his books definitely will go to a public institution. He was kidding that he forewarned his sisters about his fellow collectors, whom he actually named (hello, auctioneers), who would descend on his possessions to get a bargain. Or was he kidding?

Parting with one’s collection is easier lectured than done.

Kia Theater in Cubao isn’t in my daily commute route, not even in my annual route—but then “Hey Matteo” was Matteo Guidicelli’s big day at Kia Theater. So last Nov. 30, a holiday, we made this year’s trip to Cubao. And it was worth going the distance.

Matteo, I have found out some time ago, isn’t only a good son, he is also a genuine talent. He can act, sing, dance—he can perform and how. He can work up a crowd, hold it in his palm, so to speak, and raise it to the energy level he pleases.

We saw this in his earlier concert at Waterfront Cebu—his first—where he performed to a full house. But then, we thought, that’s Cebu, his hometown.

But he didn’t let down the packed ballroom, as he performed songs that ran the gamut from top hits to even the favorites of his titos and titas. That was when I realized that this pretty boy could belt a tune—a wide range, at that—and rock the scene.

It turned out the Cebu concert was a foretaste of “Hey Matteo”—his conquest of Metro Manila, with friend-collaborators “direk” Rowell Santiago, music director Louie Ocampo, and friend Martin Nievera.

Kia Theater was packed, and although many (okay, 99 percent) in the audience would remember “Hey Matteo” as the concert where Matteo stripped down to his waist, this tita would remember it for the music, the energy—and his palpable confidence. He ruled the stage, and even had the guts to rib his music director—and the iconic Martin Nievera.

And what helped make this production awesome was that its director, Santiago, didn’t bring to it the big ego typical of directors—it wasn’t his show, but Matteo’s. Direk Rowell crafted a production that was as millennial as Matteo is: multimedia, high energy, snappy—and sexy and stylish. It wasn’t put-on, no over-the-top trappings here. Everything seemed so spontaneous.

The interplay of light and video framed, not only backdropped, the performance—with the video close-ups and behind-the-scenes candid shots of the star conveying snippets of Matteo’s moods and character, and thus helping convey the emotion and the romance of his music.

Romance was the operative word that night—he sang his songs whose lyrics were unmistakably plucked from his interesting (love) life now: “Wag Ka Nang Umuwi,” “Take a Chance,” or “Ipapadama na Lang.” Of course that was the first time we titas heard those songs.

He’d shout “Hey yo!” persistently that night, and the crowd would scream back. That seemed like his battle cry that night.

We enjoyed Matteo’s duet with Kiana Valenciano (“Don’t Let Me Down”), with the rapper Loonie (“Noypi”), and of course, with Martin (“Say That You Love Me”).

Matteo straddled genres, from top hits to rap and hip hop—and he knew how.

Martin told us after the show how impressed he was that Matteo was so in control—of the music and of the energy.

What struck Louie Ocampo was Matteo’s “presence of mind”—“he’d waylay us now and then (in the musical numbers) but would know how to bring us right back.” He thinks that’s no small feat for a concert first-timer like Matteo.

Thanks to Matteo’s number one fan, Swatch brand builder Virgie Ramos (of course, Matteo wore Swatch that night), and Marissa Fernan of SM Cebu (Matteo’s aunt), we got to meet Matteo and his parents, Glenna (of the Fernan clan of Cebu) and Gianluca. Matteo was with us just this year as we staged Lifestyle’s Face-Off OOTD fashion show in Cebu.

We’ve seen how he is as a son (even to “Tita Virgie”), and as a boyfriend to his girlfriend. The good son is now a good performer, a very good one.