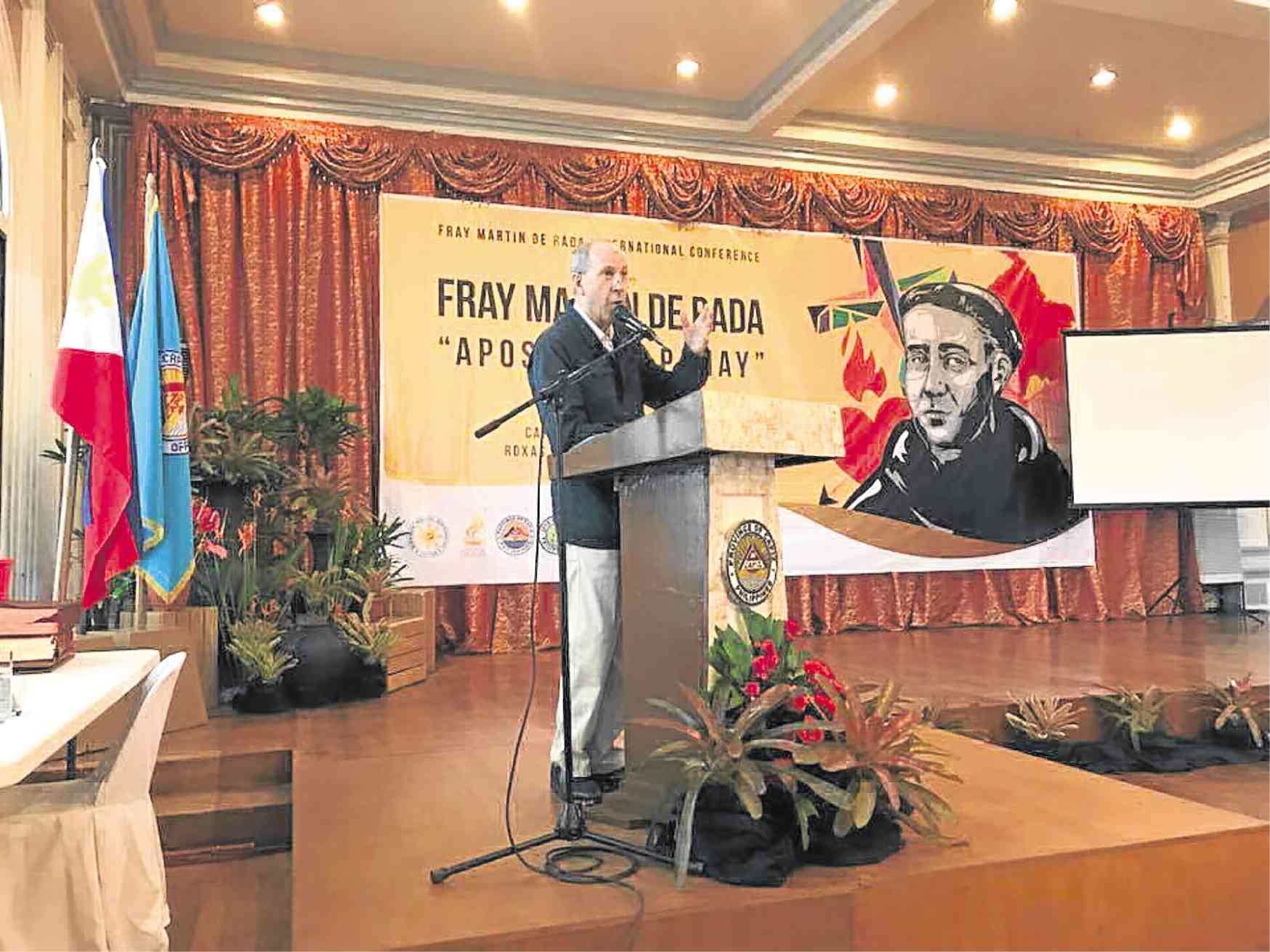 Narratives of the pioneer Augustinian “barcada” or first missionary boatload in the islands that became the Philippines are usually framed by the mapping of the “tornaviaje” by mariner Fray Andres de Urdaneta and the rediscovery of the icon of the Santo Niño de Cebu in 1565 during the expedition of Miguel Lopez de Legazpi. Rarely do Filipinos hear of Urdaneta’s confrere Fray Martin de Rada.

Recently, however, church historians began attributing to Rada the beginnings of Christianization in Panay, as well as the first efforts in fighting for the rights of the early Filipinos, which earned for him the titles “Apostle of Panay” and “Defender of the Indios.”

The island of Panay, adjacent to Cebu in the Visayas, is among the first regions to be evangelized in the country. The massive centuries-old Miag-ao Church, which has been declared by the United Nations Educational, Scientific and Cultural Organization as a World Heritage Site, is in one of the island’s provinces, Iloilo.

On the 450th anniversary of Rada’s arrival in Panay, the Fray Martin de Rada International Conference was held on Nov. 16-18 at Capiz Provincial Capitol in Roxas City.

In his lecture, “Introducing Fray Martin de Rada: A Biographical Sketch,” Fr. Czar Alvarez, OSA, described the Augustinian missionary as a “talented man, endowed with the strongest passion for the mission.”

Alvarez said Rada left the comfort of his life in Spain to serve the Church. He brought with him the scholarship he acquired from the universities of Paris, Salamanca and Alcala de Henares.

“Fray Martin de Rada was the ablest among the first Augustinian brothers in the Philippines,” Alvarez said.

Notable among the records on Rada were his forthright complaints against the abuses of Spanish officials in the colony. When he was the provincial of the Augustinians in 1572, he wrote about extortions, slavery, sexual immoralities, looting, killings, even those allegedly committed by Legazpi, who was their captain when he came from Mexico to Cebu.

“When Legazpi died, his successor Guido de Lavezares wrote to the King of Spain, asking that other religious orders, such as the Franciscans, Theatines [Jesuits] and Dominicans be sent to Filipinas instead of Augustinians,” Alvarez said, stressing that the Augustinian provincial’s principle had already started a tension between the Church and the civil authorities.

“Fray De Rada always believed that natives should be treated as brothers,” he added.

The importance of Rada had already been evident during his time, especially for both the Augustinian Order and the whole Church.

This was discussed by Fr. Blas Sierra dela Calle, OSA, director of Museo Oriental in Valladolid, Spain, in his talk, “Fray Martin de Rada and the Religion in Ming China.”

“Fray De Rada was in fact ordered by the provincial not to sail to the newly discovered islands [the Philippines] if there was no assurance that he could return at least to Mexico,” Sierra said, explaining that Rada was a gifted linguist who had great potential in dealing with China.

“It was providence that Fray De Rada had already boarded the ship, leaving for the islands, before the letter of the superior reached Mexico,” Sierra said.

Rada was able to reach China twice. His accounts during his trips helped other missionaries to understand better the coveted Eastern kingdom. But more of his contributions to the Church were done in the Philippines than elsewhere.

Other lectures during the conference were “Fray Martin de Rada: Missionary and Scholar” by Fr. Emilio Edgardo Quilatan, OAR; “Quae Mari Sinico and the Filipinization of the Philippine Local Church” by Rene Escalante, chair of the National Historical Commission of the Philippines; “Hacia la Conquista Espiritual: Fray Martin de Rada’s Missionary and Evangelization Methods” by Fr. Dedert Duarte; “Martin de Rada’s Contribution to Scientific Scholarship in the Philippines” by Francis Navarro; “Local (Community-based) Heritage Tourism” by Kara Garilao; “Cultural Heritage as a Human Right” by Lucile Karen Malilong-Isberto; and “From the Past to the Present: The Mission Continues (Kinatarcan Island Development Project)” by Fr. Aladdin P. Luzon, OSA.

National Commission for Culture and the Arts (NCCA) commissioner Fr. Harold Rentoria, OSA, said the conference was among the initiatives to promote awareness of the significant cultural heritage of the island of Panay.

“The objective of the event is not only to honor Fray De Rada. Greater is the importance of better appreciating the harvest of his efforts in forming the Church and the community in Panay,” Rentoria said.

He disclosed the pilot implementation of the systematic cultural mapping of the NCCA was done in Capiz in 2015.

Its findings, gathered from the 17 municipalities of the province, validated the longstanding suspicion that the memory and appreciation of culture had been continuously fading among the younger generations.

“It is unfortunate that many people, particularly the youth, have a low degree of awareness on the historical roots of their heritage structures and their history as a people,” he said, suggesting that heritage studies must be included in the prescribed school curricula. “We truly need to address the dearth of information on the local history of provinces in the country.”

The organized cultural mapping of the NCCA began when its Subcommission on Cultural Heritage, headed by Rentoria, crafted a framework to execute Republic Act No. 10066 or the National Heritage Law, particularly its provision of the Philippine Registry of Cultural Properties.

According to Rentoria, about 30 percent of the Philippines has already undergone cultural mapping. —CONTRIBUTED