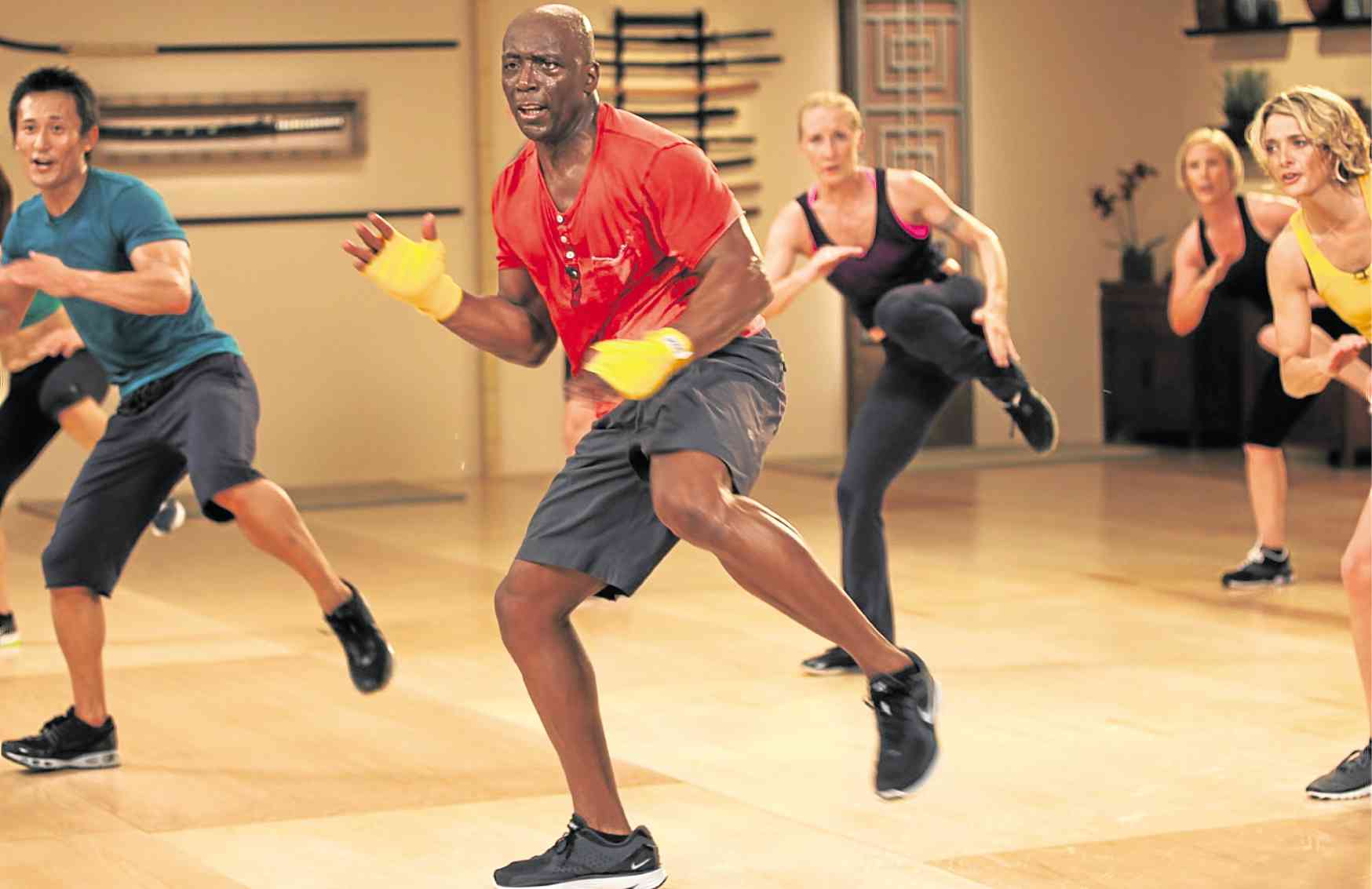 32 years of health and fitness trends

1. Jane Fonda and aerobics. Developed by Dr. Kenneth Cooper in the ’60s as a way to improve the cardiovascular system, aerobics really took off when Jane Fonda released her 1982 exercise video, a year after releasing her book on working out and weight loss. If you’re feeling nostalgic, Fonda just rereleased her entire workout program, now available on DVD and online for downloading. The woman is 79, and still looks awesome.

2. Unitards, leotards, leg warmers and sweatbands. The ’80s were all about big hair, great music, fluffy leg warmers and high-cut thong leotards. You wouldn’t want to be caught dead wearing them in the gym these days.

3. SlimFast. Who has time to prepare meals? With SlimFast, people had a shake for breakfast and lunch. Did it work? Not in the long term.

4. Richard Simmons. Simmons, who lost a significant amount of weight through aerobics (123 pounds!), released his own version—
“Sweatin’ to the Oldies.” The comedian/fitness instructor, known for his flamboyant personality, curly locks, tank tops and short shorts, became an instant household name.

5. Gym culture. Gyms have been around since the mid-1930s, when fitness master Jack LaLanne opened what he claimed was the first modern gym. They soared in popularity in the late ’70s, when bodybuilders Arnold Schwarzenegger and Lou Ferrigno (the original Incredible Hulk) became household names. By the ’80s, the concept of communal exercise began to spread. Soon gyms were no longer just for muscled men, but also for women who wanted to get toned.

6. Step aerobics. This form of choreographed aerobic exercise using an elevated platform (the step) that supposedly burns a ton of calories became a hit in the ’80s. It still draws a crowd in gyms, although classes these days combine step aerobics with body sculpting, jumping rope, sliding or funk aerobics.

7. Oprah Winfrey and the liquid diet. In 1988, the liquid diet rose to fame when influential talk show host Oprah Winfrey walked into the set of her show in size 10 Calvin Kleins
—while pulling a wagon full of fat representing the 67 pounds she said she had lost through the diet.

8. Madonna. There’s probably no decade where Madonna didn’t make any impact. In 1989, Madonna was preaching women empowerment with the release of her song, “Express Yourself.” It was also the year she showed off her sculpted body—toned biceps and rock-hard thighs—and became the fitness icon we love.

9. Billy Banks and TaeBo. People kicked and punched their way to fitness when tae kwon do practitioner Billy Banks created the TaeBo program in the ’90s. To this day, it’s still among the hottest classes in gyms worldwide.

10. Spinning. New York City’s Soul Cycle may be the workout program of millennials, but spinning actually started in the ’90s, with South African cyclist Johnny Goldberg opening the first Spin Centre in Santa Monica, California in 1990. By the mid-’90s, Goldberg had trademarked the name “spinning,” and over a decade later people still go to energetic indoor cycling classes.

11. Atkins Diet. In 1992, Dr. Robert Atkins published “Dr. Atkins’ New Diet Revolution,” a high-protein, low-carb plan. It was the most popular diet in Hollywood, with celebrity followers such as Jennifer Aniston and Renée Zellweger. Atkins had a cardiac arrest in April 2002 that led many to doubt his diet. Despite that, the Atkins is on a comeback, with celebrities touting its effectiveness.

12. Nutrition facts. The Guide to Nutrition Labeling and Education Act of 1994 in the United States required that food companies include nutritional info on nearly all packaging. By 2021, all nutrition labels must also include the percentage daily value of added sugars.

13. Yoga. This is 5,000 years of ancient Indian texts and traditions put into modern practice. Yoga became a system of physical exercise across the Western world in the ’80s. By the ’90s its popularity soared. Today, in the United States alone, the number of Americans doing yoga has grown by over 50 percent in the last four years. Yoga can help improve cardiovascular fitness, flexibility, balance and overall quality of life. It can even reduce stress, anxiety and pain.

14. 8-Minute Abs. It was in 1995 when Jaime Brenkus had millions of fitness fanatics slipping into their spandex shorts as he promised chiseled abs in just eight minutes. The 8-Minute Abs VHS workout was so popular it gave birth to 8-Minute Arm, 8-Minute Buns and other workout routines.

15. Buns of Steel. Greg Smithey developed a workout video with 50 different exercises to tone and tighten the booty. The former world-class pole vaulter’s workout is available on DVD.

16. Boxercise. Boxing hit the fitness mainstream in 1992 when boxing coach Andy Wake developed Boxercise. The group exercise included warm-ups and partner workouts using gloves and pads to go through jabs, hooks, crosses and uppercuts. Boxercise eventually gained over a million followers worldwide. Today, there are thousands of boxing-style classes all over the world.

17. Shiny spandex. Think Andre Agassi with his signature mullet and bright neon spandex ensemble. In the gym, people wore high-waisted shiny spandex shorts with a thong up the rear.

18. Ephedra. This miracle weight-loss pill turned out to be deadly, claiming the lives of hundreds at the height of its popularity. This pill is now banned by the US Food and Drug Administration.

20. Cabbage Soup Diet. Designed for short-term weight loss, this diet involves eating cabbage soup for seven days with the aim of losing 10 lbs. This mid-’90s diet fad hit a plateau, though, when critics claimed most of the weight lost was water rather than fat.

21. Couch to 5k. Created in 1996 by Josh Clark, “man who got America up and running,” this introductory runner’s program inspired countless newbies around the world, and has even spun off Couch to 25k. Today, there are apps based on his principles, and running is still as popular as ever.

22. Zumba. Dance to great Latin music and zap fat without even realizing it. That’s the appeal of Zumba, created by Colombian dancer and cyclist/choreographer Alberto “Beto Power Pedal” Perez in the 1990s. The exercise involves dance and aerobic movements performed to energetic music. The choreography includes hip-hop, soca, samba, salsa, merengue and mambo. There are squats and lunges, too. Today, more than 15 million people take weekly Zumba classes in over 200,000 locations across 180 countries.

25. Master Cleanse. Who hasn’t tried Master Cleanse? It was the hottest craze in 2006 when Beyoncé admitted to using it to shed 20 pounds for her role in the film “Dreamgirls.” Master Cleanse uses a concoction of hot water, lemon juice, maple syrup and cayenne pepper.

26. “The Biggest Loser.” Making its debut in 2004, the hit reality weight-loss show featured overweight contestants competing to win a cash prize by losing the highest percentage of weight relative to their initial weight. The show, initially coached by trainer Jillian Michaels and Bob Harper, inspired millions across the globe to lose weight. Unfortunately, studies showed that 95 percent of people who lose weight regain it, and “The Biggest Loser” contestants were not an exemption. It was found out that their resting metabolisms had slowed so significantly that they never went back up to normal, and slowed even further over time.

27. Wii Fit. Trust Nintendo to get diehard video gamers up on their feet, and even recruit nongamers into the craze. Wii Fit, introduced in 2007, is an exergaming video game for the Wii home video game console. There’s a platform peripheral called the Wii Balance Board where the player stands during exercise. The game featured yoga, aerobics, strength-training and balance, and was even used in nursing homes to improve elderly people’s posture.

28. Weight Watchers, Paleo Diet, Keto Diet, Dukan Diet. Jennifer Hudson lost a jaw-dropping 80 pounds on Weight Watchers, while Jessica Simpson lost 60 pounds of baby weight. Weight Watchers itself was founded in 1963, and it pops up every now and then when a celebrity espouses its effectivity. Today, weight loss is a billion-dollar industry. The Dukan Diet became the “It “diet when Kate Middleton was said to be on it weeks before her marriage, while Paleo and Keto are all the rage now.

29. Cold-pressed juice and juicing. This was all the hype in 2010. Juicing vegetables and cold-pressed drinks became popular in an effort to supposedly detoxify the body. One of its clear benefits is that the juices are made from whole fruit and veggies, devoid of added sugars and preservatives. Startups were quick to capitalize on the trend, with one company raising as much as $120 million by delivering prepackaged drinks.

30. Wearable fitness trackers. Fitbit, Up by Jawbone, Garmin, Samsung, Apple, Polar, Huawei—fitness trackers are the modern version of the pedometers of the ’80s. This device you wear like a watch monitors and tracks fitness-related metrics, such as distance walked or run, calorie consumption, and in some cases, heart rate and quality of sleep.

31. Functional fitness. Gone are the days when the workout routine involved the robotic action of moving the arms up and down or stepping forward and backward. Since its introduction in the early 2000s, functional fitness has become the norm, allowing one to perform moves that work out multiple muscle groups at the same time even as they mimic everyday tasks.

32. Boutique fitness studios. In 2013, ClassPass, a fitness startup company based in New York City founded by dancer Payal Kadakia and Mary Biggins, changed the entire fitness game. They created expensive boutique fitness classes that became a phenomenon. Members are offered access to dozens of studios offering many disciplines, from tai chi to piloxing to spinning to rowing. The Philippines has followed suit with the rise of indoor cycling, boxing and rowing studios.