Likhaan 11, or why we must start this year reading Philippine literature | Lifestyle.INQ ❮ ❯ 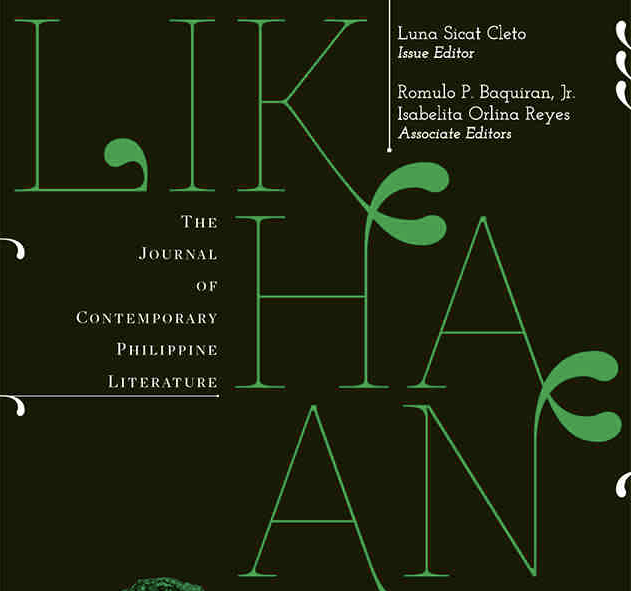 In this book, there’s an essay about a young girl recalling how she stood with one foot on the doorknob and another on a chair back, dangling from and peeking above the transom of a door, to see what her father and a 19-year-old boy could be up to in the middle of the afternoon, locked in the bedroom.

There’s a short story about a millennial who got recruited by an agency of internet trolls. The young man takes on the job and creates numerous troll personas, all to protect the images of powerful men whom the agency serves. He earns big bucks, his life changes, and he has no idea of the huge price he has to pay for this choice.

It has poems too, such as one where a child sees a man who is about to die in the middle of a forest. There’s a lone play where a ghost, through a medium, describes the padded tax being collected by a corrupt BIR official as “abot langit, singlalim ng impyerno, singbigat ng dagat, singlawak ng disyerto.” And there’s also an exquisite essay about kalabasa.

These and 15 other works make up Likhaan 11, the latest edition of Likhaan Journal which gathers the best of Philippine literary works every year. The Likhaan Journal is put out by the University of the Philippines Institute of Creative Writing (UP-ICW). Likhaan 11, launched last December during Writers Night, marks a new era in its goal of upholding Philippine literature, being the first edition to usher in a new decade for its mission.

A new decade calls for letting Filipinos know why they should read it. The reasons are as hefty as the twenty works packed in this new volume.

Because it’s the best, and we paid for it

“When people want to see what’s current, when people want to see what Filipino writers are writing, they look at Likhaan Journal,” says Isa Lorenzo, managing editor of Likhaan 11. She describes Likhaan as a repository of Philippine literature in English and Filipino, and something that “tries to gather the best works, every year.” But how is it ensured that only the best works get in? How are the works gathered and chosen? Who makes the choices? Who decides what’s “the best”?

“Likhaan is the only refereed literary journal in the Philippines. It goes through a blind review process. Four reviewers read all the entries without knowing the writer. Entries are chosen purely based on the merit of the work,” Lorenzo explains.

The four reviewers, whose identities are kept confidential until an anthology is released, are appointed by an editor, who in turn is appointed by fellows of the ICW.

These reviewers come from various universities, particularly ones which are known to be centers of excellence when it comes to literary studies and creative writing. They also happen to be involved in various genres of writing, each one having an expertise, and may even be from the regions. It can be said, therefore, that the best are tasked to choose the best, from the heaps of submissions every year.

While the reviewers get to choose which works they want to shortlist, giving ample justification for each choice by writing explanations on required review sheets, they do not always have the final say. It’s a democracy, and the editor, along with associate editors and managing editor, further review the shortlist, including works that did not make the cut.

The editors agree on a final list, then inform the writers of the works which made the final cut. The writers and editors coordinate, printing runs, and the journal is released. This has been the Likhaan grind for a decade now.

While some independent publications have emerged with the same aim of supporting Philippine literary writing, Likhaan’s means and mechanisms remain the strongest because it is government-funded. The funding comes in the form of a modest grant issued through the U.P. president.

Since it is a grant, it does not require being paid back. This explains why the journal is not for sale – profit is not the goal. Only a limited number of journals are printed; these go to the writers and the U.P. library as complimentary copies.

Likhaan has also earned a reputation for fairly compensating its contributors – a writer receives P10,000 for a work. For the Filipino literary writer who constantly works against all odds, even under dire circumstances, it is an amount that is in fact not too big, as Lorenzo points out, but is nevertheless a valuable token of appreciation and support.

So, where in all this does the reader figure? If the copies are limited, how then can any ordinary Filipino reader have access to the journals? Is traveling all the way to a library in U.P. for this best-of readings, paid for with taxpayers’ money, really necessary?

Of course not, because the journals, all 11 of them, are already available online, for free. The works have even been uploaded in PDF format, in the websites of U.P. and panitikan.com, to give readers the freedom to download the works, so they may get to read at their leisure, even when they are offline. For the Filipino reader who constantly wrestles with internet connectivity, the digital downloadable copies are simple welcome developments.

Because these writers are our own, and they write about our lives

Since the journals are known to gather the county’s best writings, these have become tools of instruction, bearing useful samples from which writers can learn. College students mostly get acquainted with Likhaan through their literature or creative writing classes, while an even smaller segment luckily become immersed in it as early as high school, whenever their teachers endorse it as a reference.

Such was the case with the poet Corin Arenas, author of the poetry collection “Life on Loop”. She was not even originally a literature major, but eventually fell for the word and pursued creative writing. A good part of nurturing her love for the art of writing can be credited to her early readings of the journals.

“Likhaan introduced me to brilliant Filipino poets and writers, like Ricky de Ungria, Gregorio Brilliantes and Gilda Cordero-Fernando,” recalls Arenas. “[Creative writing] guided me in studying good literature closely and how to reveal something essential about the human condition. I think this simple learning still influences how I read and write today.”

It is a learning that she wants perpetuated, hence her use of Likhaan as a reference too when it was her turn to teach.

She says, “I taught many short stories and poems from the first volume[s] of Likhaan. I wanted to give my students the same learning experience I got when I encountered pieces from the book, when I was in college and grad school.”

She hopes that young writers would be inspired as she was when she first encountered De Ungria’s “Shrimp Moves”, Cordero-Fernando’s “A Wilderness of Sweets” and Eric Gamalinda’s “Zero Gravity” from the anthology.

While Likhaan’s relevance to Philippine literature has been made secure by its efforts over the past ten years, it still remains largely known only among Filipino writers and students. But that’s a reality that may hopefully soon change, as digital platforms now afford everyone free access to Likhaan works.

Even the current upsurge of small presses, live readings and independent publications outside of the academe, promoted through social media, bring an awareness about reading and writing among the tech-savvy young like never before. All these ultimately ripple back to an interest and a hunger for fine reading, something that Likhaan founded its name on.

Although he does not see Likhaan’s prestige as something that eclipses independent publications, he expresses joy about Likhaan’s reach and accessibility and acknowledges the role it played in the early days of his career as a poet.

These new voices turn out to be some of the most passionate, and their perspectives profound, giving us verses and narratives that can help us face difficult times. These are writers who are attuned because they live the same lives that we live, working hard to sustain themselves and the people in their lives. Most of them have faced rejections too, before their works found their way into Likhaan, to find readers in return.

For instance, that kalabasa essay’s author, Kat Del Rosario, is a freelance writer who professes to have “always written, ever since I was little. It was one of the ways that I tried to make sense of the world.”

She admits “there’s always a bit of trepidation” whenever she has to surrender her work for evaluation, but she has embraced that ever-present uncertainty and looks forward to writing more and submitting to Likhaan again. She has bold projects in mind, to “write around the themes of womanhood and family,” then “dip into the waters of young adult, historical and magic realist fiction.”

As for the fee she received, it can be said the journal has helped her pay some bills.

Then there are those works the wisdom of which defy the age of their makers – they can even be as young as our sons and daughters, being still students who are finding their way, yet already bearing compassion for their countrymen.

Writer of the short story “Troll”, Nicko de Guzman, is among these very young writers. He has been an iskolar ng bayan since his days at the Philippine High School for the Arts where he first read Likhaan, all the way to his being a creative writing student now in U.P.

He admits feeling frustrated because he sees that there are a lot of things that should be written about, “lalo na sa politikal na sitwasyon natin ngayon.” So he declares his commitment, “Para sa akin, nandiyan naman lagi ang hamon sa lahat ng manunulat na magsulat ng socially-relevant pieces.”

And as this student reaches out to us through Likhaan 11, through offering his work along with the rest of the contributors, there can be much for us to gain as a people – to make our hardships a little bit more bearable, to understand ourselves better, how come we insist on our stubborn ways and why we desire the things we desire – if we could only care to read. NVG