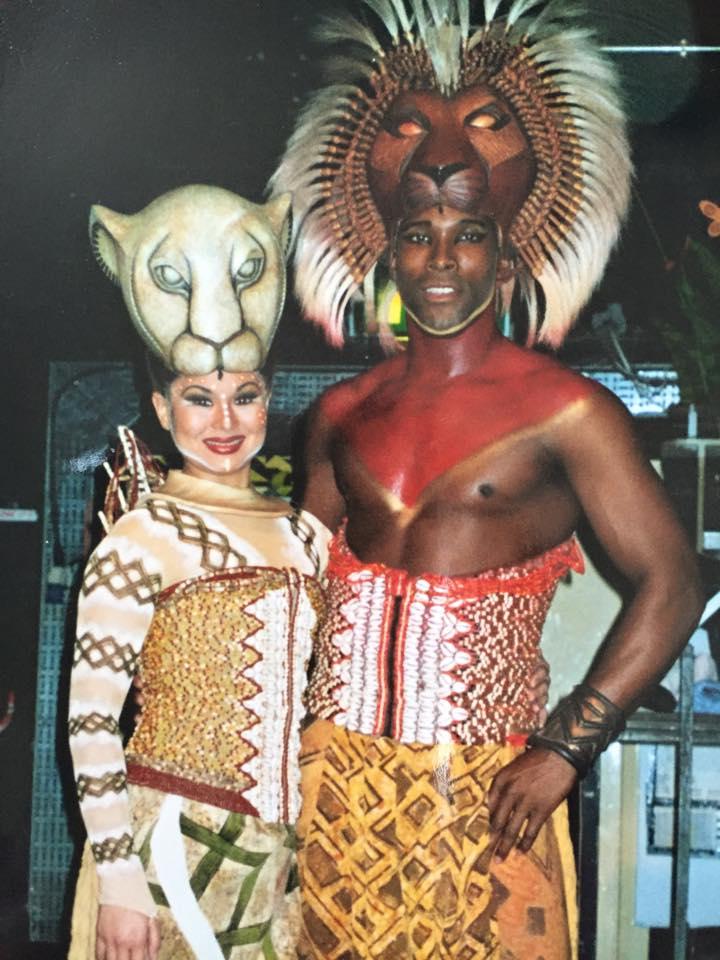 Gia Macuja as Princess Nala, with Roger Wright playing Simba, in the West End “The Lion King”--PHOTOS COURTESY OF THE MACUJA FAMILY

In 1995, Gia Macuja, then single and a young soprano from musical theater in Manila, was playing Ellen in the West End production of “Miss Saigon”—the first Filipino to play the role as an Asian-American—when she auditioned for the celebrated musical “The Lion King,” based on the animated Disney film.

“I was offered to be one of the swings in the show, a role requiring me to cover four different tracks,” she recalled. “So, for several weeks of both runs, I would rehearse for ‘The Lion King’ in the day and perform ‘Miss Saigon’ at night. It was exhausting, but for a 20-year-old, I was having the time of my life! How lucky I was to jump from one contract to the next, being a Filipina in London.”

On the second year of being in the show, Macuja auditioned for the role of Princess Nala, the female lead, and got it.

“I didn’t think they would give it to me because I was a Filipina, but they did! So I was the first Filipina to play the role of Princess Nala in ‘The Lion King.’”

She envisioned the role of the princess as a fierce lioness, brave and earthy, an Amazon. And her Simba, the lion king himself, was a 6’3 black Briton. “So,” said Macuja, “I certainly had to act a lot bigger than I was!”

As a swing in the show, she had multiple roles, playing different animals like Birdlady, Hyena, Cheetah, Fireflies, Grass and even Simba’s mother Sarabi. Aside from the Brits, there were many South Africans in the cast, working in England for the first time. Macuja became good friends with them, learning more and more about their culture.

There were two other Filipinos in the show—Imelda delos Reyes in the original cast, and Maya Barredo Duffy the following year.

Then romance came into the life of the singer-actress. She met and married Robert Atchison, a violinist and orchestra leader, three years into the show. Now they have two children. Atchison continues to lead the orchestra, and the show will be celebrating its 18th year in the West End in October.

The Atchisons were in town recently to spend the holidays with the Macuja family.

“I think now more than ever, West End theater is opening its doors to multiracial casting,” Macuja observed. “Filipinos have gained a very good reputation because of our raw talent, work ethic and natural charm. That’s why big producers like Cameron Mackintosh, Disney and the Royal National Theatre come to the Philippines to hold special auditions, apart from the ones they have in the United Kingdom.”

She added: “I am really proud of how we’ve come a long way, thanks to the likes of Lea Salonga who started it all with ‘Miss Saigon’ in the late ’80s. We’ll always be limited because there are a lot more musicals written for the Western look. But that’s also slowly changing, as the trend in musical theater seems to be going toward breaking more and more boundaries with hits like ‘Here Lies Love,’ ‘Hamilton’ and, of course, ‘The Lion King.’” —CONTRIBUTED

The Manila production of “The Lion King,” presented by Concertus Manila, runs March 18-April 7 at The Theatre at Solaire. Manila is the first stop of an international tour to celebrate the musical’s 20th anniversary. Call 09178279856.