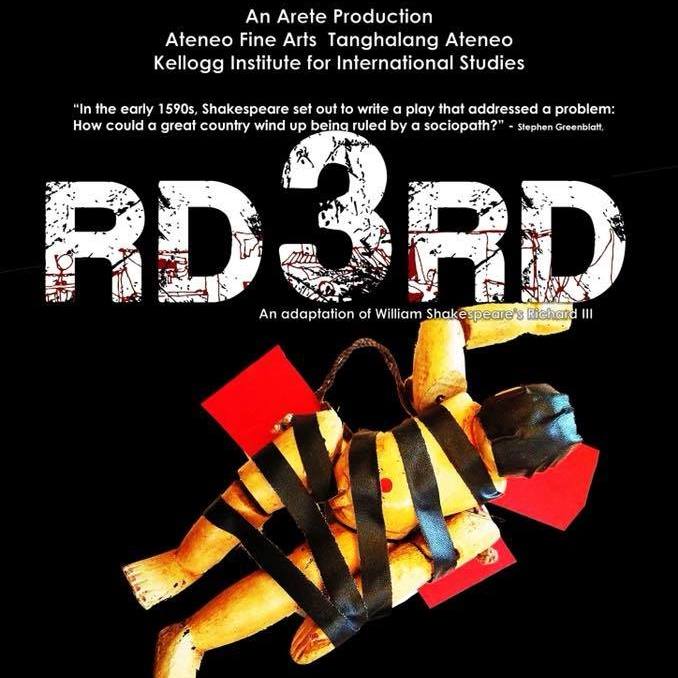 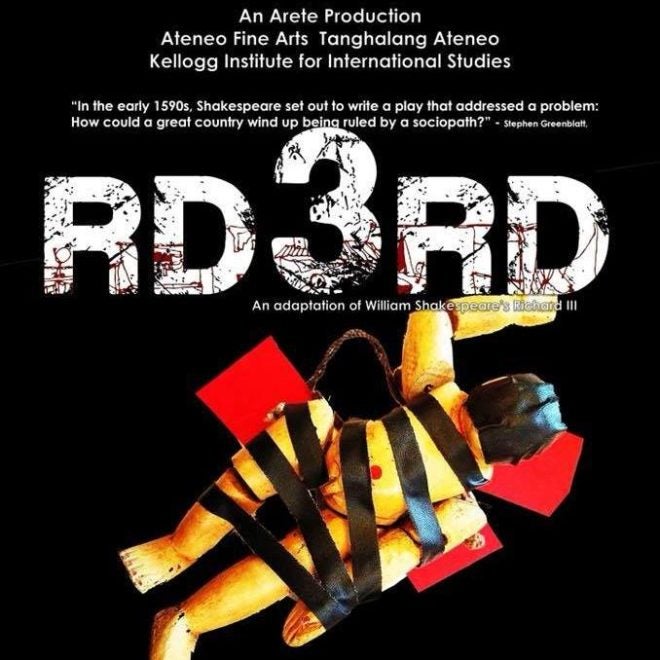 Can Shakespeare’s “Richard III,” believed to have been written in 1492, find relevance in 2018?

On Jan. 11, Areté, a newly formed creativity and innovation hub of Ateneo de Manila University, mounts “RD3RD,” an adaptation of the play.

The adaptation was triggered by an opinion piece in the New York Times entitled “Shakespeare Explains the 2016 Elections,” written by Stephen Greenblatt. It made a crucial observation: “In the early 1590s, Shakespeare set out to write a play that addressed a problem: How could a great country wind up being ruled by a sociopath?”

Greenblatt’s thesis is that a sociopathic ruler’s rise to power hinges on the cooperation of “enablers” who, wittingly or unwittingly, aid and abet that ruler’s political agenda.

Areté artistic director Ricardo Abad is directing the play with Anton Juan. Abad says it was University of the Philippines professor and Shakespeare scholar Judy Ick who first read the Greenblatt piece and noted its resonance not only in American politics, but also in the local environment.

“When she read the piece in the New York Times that linked Richard III with the Trump administration, Judy talked to me and Anton to direct the piece. And when we said yes, Judy proceeded to assemble a performance text for a production.”

Says Juan: “The parallels between England’s bloody monarch and many sociopathic leaders in world history makes Shakespeare’s play recognizable to us. And we are bound by the desire to respond as artists, and conscious human beings, to the culture of impunity and blood.”

“In recent months, Philippine theater has seen many productions that contest the current regime, particularly on the issue of extrajudicial killings, as well as those that revive the horrors of martial law,” adds Abad. “It would be interesting to see how this production helps to add to the outcry for justice and human rights.”

When it comes to directorial duties between him and Juan, “We don’t have a strict division of labor as we consult each other on scenes,” says Abad. “As far as I am concerned, Anton can direct the play by himself—and produce sensational work! The codirection came about as a practical necessity because Anton, who teaches at Notre Dame in Indiana, was going to be absent during the middle part of the rehearsal period and won’t be able to stay through all the performances. I was entrusted to handle directorial tasks in his absence. But when we’re together, it’s a collaborative process. Anton will do a scene and I am free to make adjustments and vice versa. It is fortunate that he and I are of one mind with the approach, and have great respect for each other. We have no quarrels in interpretation, casting, production design or scheduling.”

Adds Juan: “Ricky and I have collaborated many times before in such works as ‘Othello,’ ‘Antigone’ by Anouilh and many others. We respect each other’s work as directors and we have a history, as our cast has, of collaboration in World Theatre Projects and other cultural work outside. We work together always searching for the embodiment of the concept.”

Ick as dramaturg “is key to the collaborative process,” says Abad. “Her thoughts are essential when Anton and I discuss how to approach a scene or an act. Judy is not a dramaturg who submits a performance text and entrusts the staging to the director. She is part of the staging process from day one and a vital part of the play’s artistic vision.”

There were no auditions for the play. “Participation here is by invitation only,” says Abad. Cast and crew will not be paid, as this is a voluntary act of performance. We wanted actors who would not only play characters in the conventional sense, but also to play their roles in the context of their political convictions.”

“Watch this play as a political act—a form of political activism, a way of making a stand and doing something against the violation of justice and human rights,” he says. “For to do nothing is to allow abuse to prevail.” —CONTRIBUTED