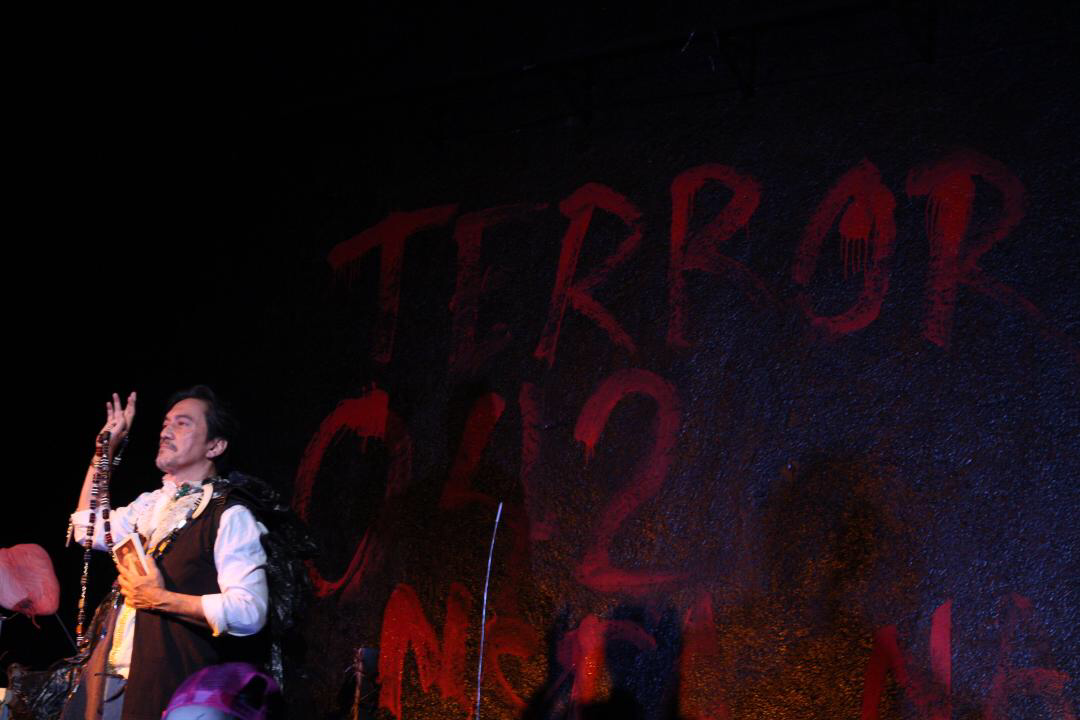 ‘RD3RD’ is a frightening wake-up call

The relevance of William Shakespeare’s works appears in full force in “RD3RD,” an adaptation of “Richard III,” directed by Anton Juan and Ricardo Abad. Taken primarily from the first three acts of the original play, “RD3RD” adds new elements and scenes and dialogue to create a whirlwind of images that connects Richard III and his murderous rise to power with present-day Philippines, and links Richard III with our own president.

In the play’s program, directors Abad and Juan state that they have included “sections of Henry VI part 3, a New York Times Op-Ed piece by Shakespeare scholar Stephen Greenblatt, and excerpts from the Bible, Dante, Heidegger, and the rock group Victim’s Family thrown in for good measure.” To enhance the de-familiarization of Shakespeare’s original piece, the cast is all dressed in highly stylized costumes made from modern clothes adorned with garbage bags and rags and other accessories made from ordinary items (Lady Anne wears a box turned into a skirt held in place by what looks like a colored garter).

Completing the link between “Richard III” and Duterte, Teroy Guzman plays the Duke of Gloucester with great bravado, punching his lines with “P*ina” before or after for added effect.

It is a biting interpretation. The gorgeous language of Shakespeare, sullied by the emphatic vernacular swearing peppered into Richard III’s dialogue, presents our time, our contemporary world as a tragedy of equal weight as that of a literary gem. And by removing the last two acts, it paints a bleak picture of the current without hope for redemption.

Artistically, the concept is powerful and moving. It lifts up the women’s roles, harkening to this age of the #MeToo movement and women empowerment, giving voice to women who have lost much in this patriarchal society, but also without forgetting women who have enabled it to happen (like Catesby, who is fashioned into the likes of Mocha Uson, complete with a duo of online trolls).

The show is an assault to the senses. It is loud and forceful with its points. It leaves space for the audience to react to this world, spoken in Filipino, and the grieving of the dead, for there are many. It is in these directorial choices that “RD3RD” makes its strongest point.

The cast is flawless in their capacity to bring all of this to the fore. Teroy Guzman is captivating as Richard III, while Ron Capinding plays Buckingham, Richard’s co-conspirator, with carefree ease.

But it’s the women who have the strongest scenes— from Katski Flores’ Lady Hastings to Judy Ick’s magnificently powerful Queen Margaret, and an engaging Missy Maramara as Lady Anne.

Close to the action

While the costumes can be distracting, the play benefits from being very close to the action. The stage is set in between two rows of the audience. Without microphones, the cast projects their voices and the natural sound creates a vital energy that heightens the tension.

By being very particular with the choices of scenes to portray, “RD3RD” becomes focused in telling the story of how despotic rulers come into power.

It is a frightening wake-up call to open our eyes to what is currently happening around us, through a play written hundreds of years ago.

It’s the sort of power and energy that makes theater such a powerful artistic medium. And it is very relevant, solidly firm in its intentions—a work of theater that is unafraid to speak its mind. —CONTRIBUTED