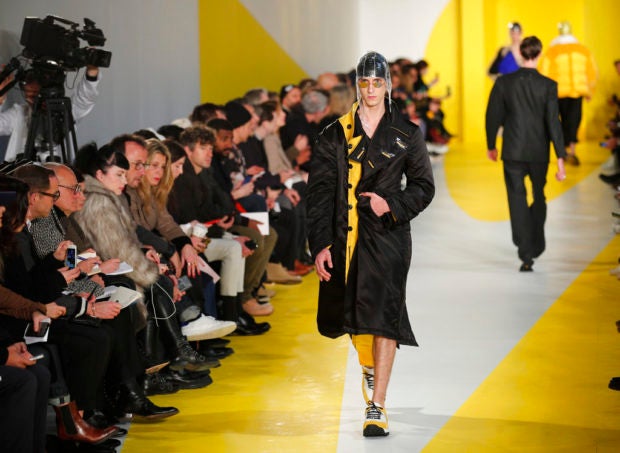 Color galore in Paris as menswear gets bold

PARIS (AP) — There was color galore at Paris menswear shows Friday, with John Galliano channeling the hues of the rainbow for Maison Margiela and Cerutti 1881 featuring flashes of gold. The Alexander McQueen fashion house mixed in flashes of red to an otherwise dark display of menswear.

Some highlights to the fall-winter shows:

A RAINBOW AT MAISON MARGIELA

John Galliano studied the science of the rainbow for a colorful and typically quirky collection.
A clinical white venue, populated by myriad staff in their signature white lab aprons, led the eye down to a bright yellow runway. Its large oval shapes brightly evoked the rays of sunlight and suggested the inspiration for the fall-winter display.

From a vermilion coat with sloping shoulders to a sunny yellow bubble jacket, narrow blue pants and a belted, deep saffron knitted coat — the collection looked as if Galliano had separated each of the colors refracted in a rainbow. Science and the laboratory have been a touchstone for the brand for years.

Tongue-in-cheek garments of practical use in the rain were mixed in with the 30 couture-infused designs. There were transparent rain caps that gave a 1950s edge, and a see-through PVC belted rain coat that was on-trend in its play on texture, layering and transparency.

As fashionistas left the grand Hotel des Invalides venue, the world outside warmed up too: The winter drizzle suddenly stopped, giving way to rays of sun.

Lauded designer Galliano has been called many things in his career, but a weather forecaster must be a first.

There was more than a flavor of London in Alexander McQueen’s sophomore Paris show.

The Saville Row suit and tie — with an archetypally British red-check sweater — was the starting point for a display shown in an industrial, disused office space.

It was clear that this buttoned-up vibe would give way to more creative explorations when in the next look, a black business-like parka jacket — wrapped around the waist — billowed out like Asian samurai pants.

A suit in chocolate had wide shoulders and unusually-shaped tapered sleeves, which added an edge to the classic garment.

And references to the ’80s — such as a shimmering snake-patterned Glam Rock coat and an oversize red-check scarf — injected some fun into a collection, which tipped more toward the commercial than the house’s womenswear does.

In a sign of the growing importance of both menswear and Paris to the fashion industry, Alexander McQueen is now — with the house’s second men’s runway show in the City of Light — a firm staple of the calendar.

Founded by the late designer Alexander McQueen in 1992, the house had shown menswear designs in previous seasons by appointment in Milan and London before it made its Paris runway debut last season.

The CEO since 2016, Frenchman Emmanuel Gintzburger, had been tasked with expanding the fashion-forward brand. This move puts the men’s designs in line with the lauded womenswear collections that are shown in Paris during ready-to-wear week in the spring and fall.

South Korean designer Juun J. often plays with oversized shapes, and for the latest fall and winter collection he took his signature themes up a notch with a highly sculptural collection defined by huge bubble jacket material tied around the models’ necks.

The palette was typically tame, with its black, white and blown-up check infused with flashes of vermillion and pale yellow, but the shapes less so.

A huge black bubble jacket, knotted around a female model’s upper half, obscured the body alongside a bubble “skirt” with a fine corrugated surface clumsily wrapped around the bottom half. Its myriad hanging tassels further adding to a visual kinesis.

Much of this haphazard body “wrapping” was more sculptural and creative than actually wearable.

A black check suit with multiple layers was given an abstract twist with a shiny bubble jacket around the neck that looked almost like the inflatable neck pillows you find on airplanes.

Although his restrained fall-winter designs featured darker hues than normal, there were rick pickings for anyone who likes a bright wardrobe.

A beautiful military green coat in soft wool looked huggable, as did a pair of fluffy sports-infused eggshell pants.
A gold shirt evoked the rich fabrics of India, and the rich color also cropped up on a Cerutti logo sweater and a sporty women’s coat with black fanny pack.

There was a sporty edge to many of the 47 looks as is increasingly common with many menswear brands around the world.

Chief Creative Officer Basmajian brings a business approach as well as an artistic one to his fashion designs. Friday’s saleable collection was a case in point. MKH